Hanson Ski manufactures high-quality ski equipment in Colorado. Hanson operates in a strongly growing high-end segment of the market, and is among the ten largest firms when measured by revenues. The nature of the business is highly seasonal in nature. Orders for ski equipment are usually taken over summer season (March to July), whereas shipments take place from early fall till December. The company manufactures the equipment throughout the year and usually carries a significant amount of inventory during off-season periods. Moreover, the sales are made on credit and the credit terms are in line with the industry convention of upto three months. Therefore, the company carries a high amount of current assets during the period ranging from September to November. Understandably, the company needs to finance this working capital through some form of financing. Historically, the company had been using short-term loans from a range of creditors including banks, finance companies, and principal shareholders. These sources of short-term loans were costly and inefficient. In an effort to manage its cash flow, the company has now been able to obtain a line of credit amounting to $4.2 million from its bank. However, the line of credit is also restricted to a maximum of 70% of inventories and 80% of receivables at any point in time. The company now needs to determine if this loan balance will be sufficient to finance the working capital requirements of the company for the fiscal year 1987. To further complicate matters, the company also needs to repay a loan of $841,000 in the month of November. The repayment of this loan is essential to the owner maintaining control of the company’s operations. 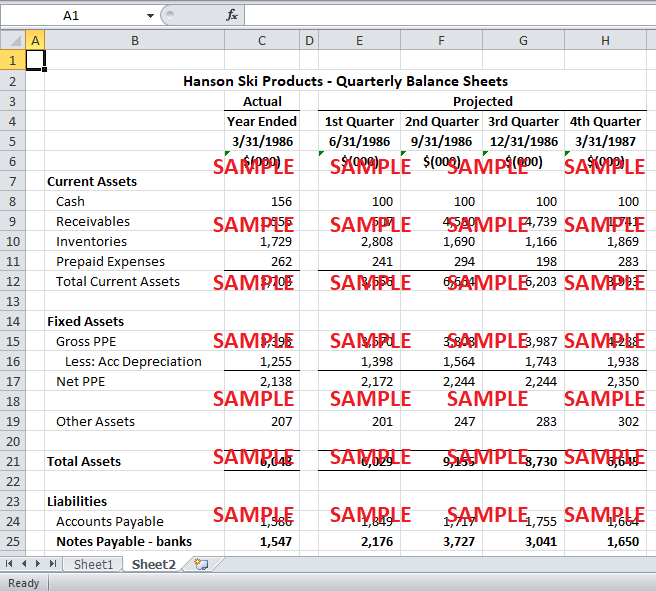 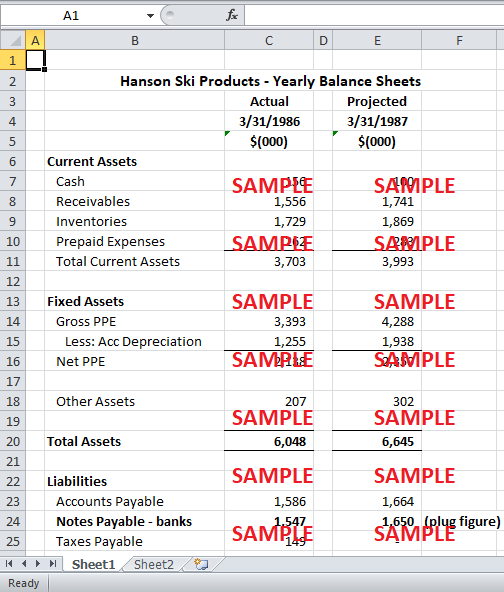 The notes payables for each quarter can be best determined by constructing the projected quarterly balance sheet for each of the quarters of the fiscal year 1987. The quarterly balance sheets can be constructed in the same in which the yearly balance sheet was prepared. The exhibits of the case study also contain the quarterly data for income statement projections (exhibit 2) and balance sheet items at the end of each quarter (exhibit 3). The appendix details the projected quarterly as well as yearly balance sheets, as constructed from the data in the case study. The quarterly balance sheets reveal that the notes payable are considerably high at the end of the second and third quarters. Although the levels of notes payable are lower than the maximum credit limit of $4.2 million, the credit line has an additional covenant that the maximum borrowing should not exceed 70% of inventories and 80% of receivables. Therefore, we need to investigate if the amount of notes payable exceeds the amount mandated by the covenant associated with the borrowing. The following table compares the credit limit for each quarter with the actual credit required. The credit limit has been lowered in the quarters in which the amounts of receivables and inventory are not sufficient to support the maximum possible credit of $4.2 million.

The table reveals that the company is able to finance its cash requirements through the credit line at the end of each quarter. However, the high levels of notes payable in the second and third quarter imply that the company will be stripped off cash during the period from August to December. Therefore, it is not certain if the company will have enough cash to meet its loan repayment during the month of November.

It is important for the smooth running of the company that the loan is repaid on its schedule, which is in November. Since the loan amount is significant, it is not certain if the credit line will provide the company with sufficient cash to repay the loan. We already know that the company has sufficient credit to meet its obligations at the end of September (end of second quarter) and at the end of December (end of third quarter). However, we need to check the cash requirements in the months of October and November. The following table provides a summary of net cash requirements in each of these months as provided in exhibit 5 of the case study:

We already know that the notes payable at the end of September are $3.727 million. This means that we can only borrow less than $500,000 in the coming months. We are expected to get additional cash inflow of $47,000 in the month of October. However, the cash outflow is expected to be 970,000 in November if we want to repay the entire loan as scheduled. The credit line will be insufficient to cover this outflow. Therefore, we need an additional source of financing to cover the additional cash requirement. The credit position improves significantly in December with net cash inflow of over $1.6 million. Therefore, the additional cash financing is needed for only one month.