The case study depicts a scenario in which it is obvious that expansion is a necessity in order to increase return. As mentioned in the case, a new park attracts a lot of local attention and also gets a significant amount of press coverage which creates a great deal of excitement in the community. Hence, for the first few years the new parks reach peak revenue which makes them profitable. Also, the investment is quickly recovered. Nevertheless, as this novelty wears off the revenue growth declines. Furthermore, HiJinx had committed to opening around a dozen new stores and had already built up substantial infrastructure to facilitate its projected growth. It could not default on its obligations. Therefore, HiJinx Inc has no choice but to expand in order to maintain the revenue growth.

For this reason, HiJinx Inc. has to find the best way to raise approximately $ 30 million for expansion. Before deciding which project to undertake, it is important to recall and list the options available to Kenna Christy, the CEO of HiJinx Inc. These options are discussed below. 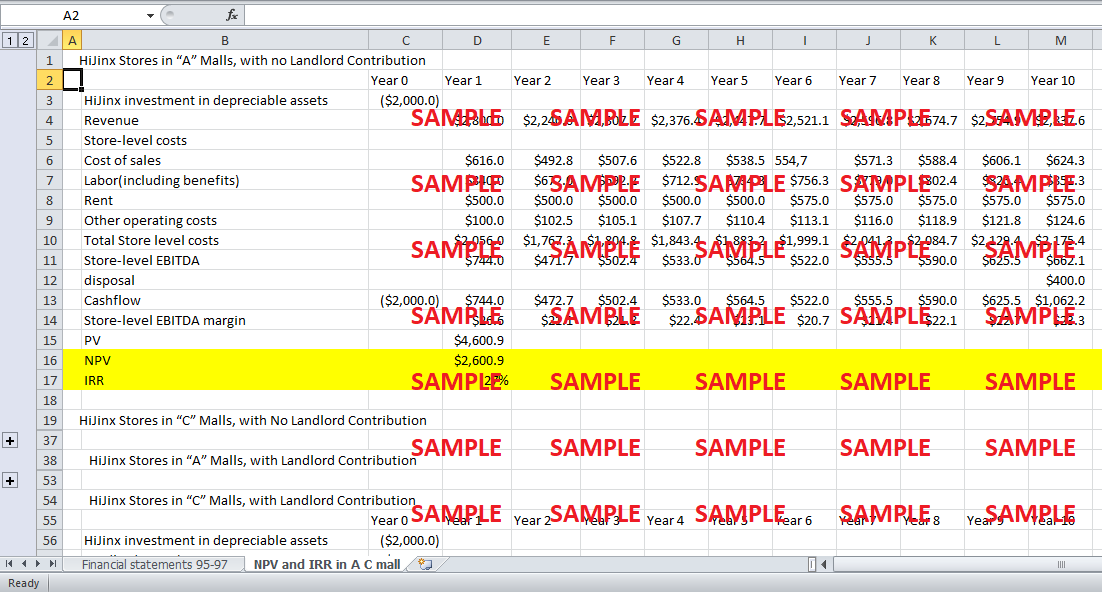 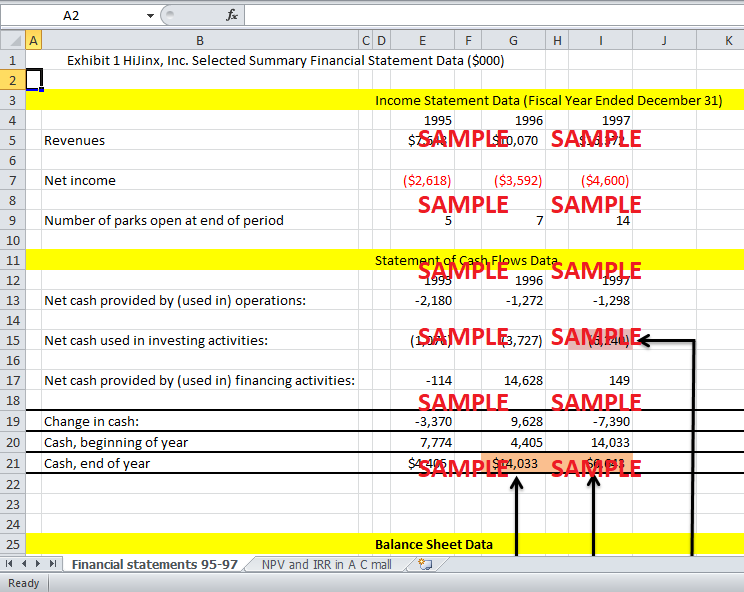 Keeping all these options in front shows that no one option can be relied upon to finance the expansion completely. Therefore Christy has to derive a strategy to raise capital in order to fund the 10 years expansion plan.

For now the feasible option for her is to allow the private equity investors to invest in the company, invest in mall C where landlord contributions decrease the initial investment in each store and also avail the credit facility provided by Royal bank. Issuing IPOs in 1998 will be extremely risky because market conditions are ambiguous and, therefore, for now, the IPOs should be delayed.

And should the company maximize the net present value of its invested dollars, or the internal rate of return (IRR) on its projects?

The company should maximize the NPV rather than the IRR. In the decision making process, IRR is mostly used as an additional information to the NPV. Where NPV determines the absolute return on an investment while the IRR just gives a rate of return percentage. Therefore, if the company's objective is to maximize shareholders wealth, it must try to maximize its net present value (NPV). The most important problem with IRR is that, in a few cases, managers may reduce Shareholders wealth by rejecting Projects with higher (positive) NPV, when they focus solely on maximizing IRR.

In case of HiJinx Inc., we see conflicting decisions resulting from analyzing NPV and IRR. When compare the NPV and IRRs of HiJinx Stores in “A” Malls, with no Landlord Contribution and HiJinx Stores in “C” Malls, with Landlord Contribution in  "NPV and IRR in A C mall" worksheet, we see that the IRR of mall C is higher than that of mall A. Thus, the company invested in Mall C, however, the actual absolute return is the NPV of the malls which needs to be compared when deriving strategies to maximize the shareholders' wealth. For this reason, Mall A is a better investment than Mall C because Mall A has higher NPV.

When should leverage be used to enhance returns?

Leverage is debt in relation to equity in a firm's capital structure that is calculated by the debt-to-equity ratio. Financial leverage increases as we take on more long-term debts. Shareholders benefit from increased leverage only to the extent that returns on the debt invested is higher than the interest costs.

Leverage should only be used to finance a project when a firm is fairly sure that it will earn a consistent return and is also a risk taker. Even though, it assists both the investor and the borrowing firm to invest or operate, high leverage has a great deal of risk associated with it. In business, a firm could use the borrowed funds to try and generate shareholder wealth, however, if it fails to do this, the interest expense and credit risk of default eats away the shareholder value like a parasite. Therefore, the most desirable amount of leverage largely depends on the stability of HiJinx Inc's earnings.

With reference to the case study, it is apparent that Christy is fairly certain that an expansion will bring about high returns in the next ten years before the market saturates, thus it will be willing to take on debt if need be. The forecasted income statement also shows an increase in profitability over the ten year expansion period.

Additionally, as long-term debt interest is a fixed cost, HiJinx should forecast if it would have enough cash available to pay the interest (as well as other expenses) on timely basis, otherwise the firm can face a risk of bankruptcy. In the case study, we have already seen that Discovery Zone and Showbiz had gone bankrupt when they were not able to pay off their creditors.

Finally, it is important to identify the role of long term debt as a signaling move. If HiJinx borrows money to invest in expansion this signals to the market that higher returns are to be expected in the future. This will eventually lead to a higher demand and, hence, a higher market value of the common stock and any initial public offerings issued thereafter could be sold for a higher price than $16.

As discussed in the first question, HiJinx cannot finance the expansion with just one option unless it issues an IPO at lower price. A far better proposition would be to delay the issuance of these IPO. First of all, the company should agree to private equity investors who are optimistic about the progress of the company and are only concerned about the profitability of the firm.

Additionally, for the first few years in which funds are low (due to the delay of IPOs), the firm should chose mall C location so as to use the landlords contribution to reduce the initial investment on each store. However, once the IPOs are issued, the investment could be done in higher NPV projects in mall A. This way HiJinx will be able to maximize its revenue and profits keeping its budget constraint in mind.

The company should also take on a little long term debt to signal to market the investment in expansion and higher future returns. In the corporate environment, signaling is also a determinant while deciding the debt equity mix. Mostly a move of borrowing funds for longer term depicts to the market that the firm is expanding and a higher return could be expected in the future. Hence, the demand for the stock increases and this causes the market value of the HiJinx stock to increase. Thus, as a tool for signaling taking on debt could be a important move.