RJR Nabisco, a company operating in food and tobacco businesses, is considering proposals of purchase. The best bid has to be identified for which the company has to be valued in three different operating plans; the current operating plan and two proposed plans by bidding groups; the Management Group and KKR. The Discounted Cash Flow (DCF) method has been employed with Weighted Average Cost of Capital (WACC) used as a discount rate to value the company under each plan. The Capital Asset Pricing model (CAPM) has been used to calculate the cost of equity. It has been concluded based on the DCF analysis and general information given in the case that bidding offer by KKR is the best proposal for RJR Nabisco. 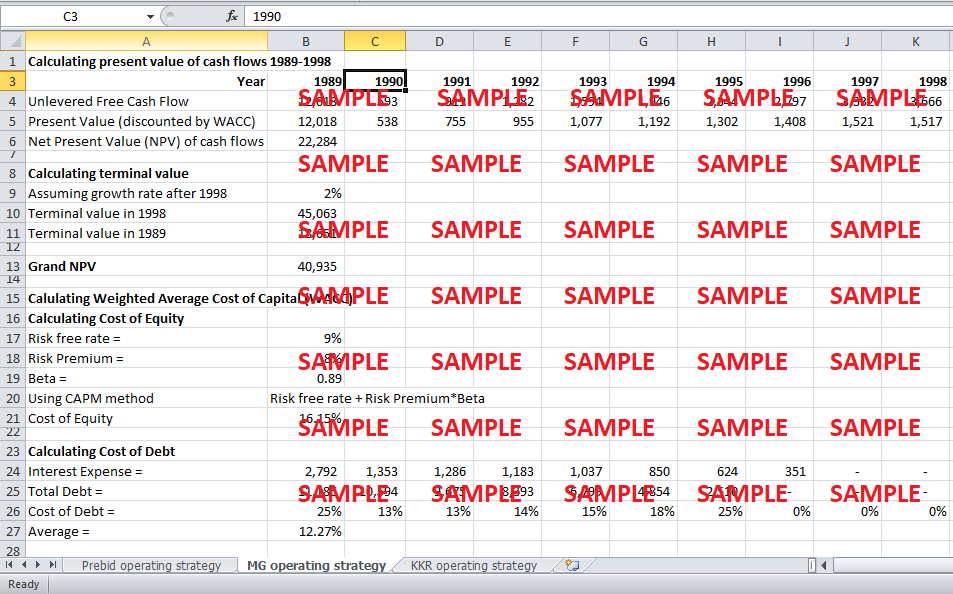 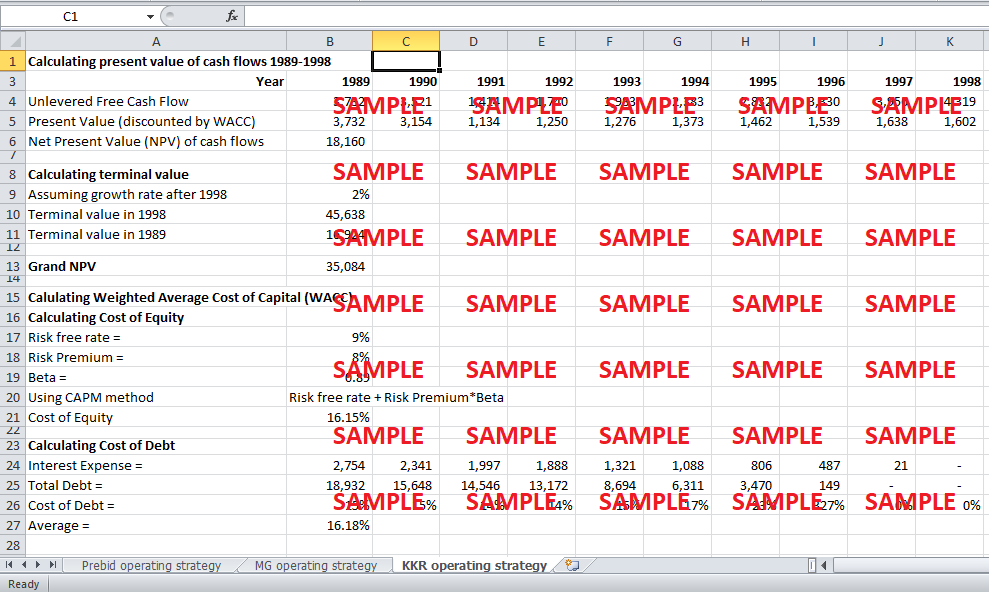 1. What was the value of RJR Nabisco under;

a. The pre-bid operating strategy?

b. The Management Group’s operating strategy?

Value of RJR Nabisco has been calculated under the three strategies using the Discounted Cash Flow (DCF) Model. First of all, unlevered free cash flows have been taken from the cash flow projections given in the exhibits. The cash projections given in the “cash flow available for capital payments” row can be taken directly as unlevered cash flows as the interest income/expense has not been catered in these figures. The cash flows beyond 1998, or the terminal value, have been calculated using the Gordon Model by taking the average growth rate of dividends to be 2% forever after 1998. Then, to discount the cash flows at an appropriate percentage, the Weighted Average Cost of Capital (WACC) has been used. To derive WACC, Cost of equity and cost of debt have to be separately calculated. The cost of equity has been derived using the famous Capital Asset Pricing Model (CAPM). According to CAPM, required rate of return by the holder of the equity, or the firm’s cost of equity, is equal to Risk Free Rate of Return + Market Risk Premium*Beta. The risk free rate of return has been taken as, the 1988 U.S 3-month Treasury bill rate, and the risk premium has been taken from comparable companies. Beta is given in exhibit 2. The other component of the WACC, i.e.., the cost of debt, has been simply taken as the company’s interest rate, calculated by dividing yearly interest payments by the total outstanding debt.

Using this method, the enterprise value of RJR Nabisco along with the per share equity value can be summed up as; Pre-bid operating strategy – Enterprise Value = $ 28,649 Million, Per-share price = $ 91.40

2. What accounts for any difference in the value of the three operating plans?

The Management group is of the belief that the tobacco and the food businesses should be separated because the tobacco business undermines the food business, and the tobacco business itself has stronger cash flows potential than it is currently generating. Separation of business will let investors evaluate and realize the actual intrinsic value of each business with more confidence. The Management Group planned to sell the food side reasoning that it was undervalued by the market. They aimed to focus on the tobacco side wholly and solely and lift it to higher potential. On the other hand, KKR come with a completely contrary opinion. It plans to sustain both the tobacco and the food operations. They also vow to expand the tobacco side to Winston Salem, North Carolina. KKR is of the opinion that running the food business more efficiently can actually bring more profits as compared to selling the assets of food business and going for recognizing all of it in the form of gain at one time. However, the significant difference in the buy-out strategy is that KKR proposes to use a leverage buyout of the RJR Nabisco. KKR will also assume all the existing debt of RJR Nabisco. This is also reflected in the WACC figure where portion of debt and the cost of debt are significantly higher for KKR as compared to the management group.

Hence, each group has their own perspective of the future operating strategy for RJR Nabisco. The buy-out strategies are also different. Each believes their way could help market realize the company’s value more accurately and maximize interests of all the stakeholders.

3. Evaluate the Special Committee’s use of an auction of RJR Nabisco?

The auction for the sale of RJR Nabisco organized by the special committee allowed bidding entities to contend and post their best bids on the table while also keeping the interests of all the stakeholders on priority and preventing any sort of collusion. The Special Committee’s adoption of a defined set of rules and regulations served as ground rules essential to carrying out a smooth process. The rules set up a level playing field for the bidders, thus, minimizing uncertainty for all the stakeholders. Each of the four basic rules had its own significance. Taking the first rule, which states that proposals should not be conditional on the sale of any assets of RJR Nabisco, the special committee has sent out a positive signal to employees and expressed its concern for securing their interests; mitigating away their worry for their job losses. Not only that, this rule also puts a check on a very common practice in Leveraged buy outs in which bidders make pre-agreements with potential buyers for the acquiring company’s. Rule no. 2; proposals should provide RJR Nabisco shareholders with a substantial common stock related interest, is a condition to link the bids offers directly with the capital gains of the shareholders, thereby guaranteeing a return for the shareholders. Rule no. 3, requiring disclosures of financing arrangements, serves as an important clause to uphold transparency in the deal and ensuring that the special committee gets all the required and necessary information to evaluate the incoming proposals to the best of their judgment. Similarly, rule no. 4 is also a safety check to the bidder’s seriousness and commitment in acquiring and future running of RJR Nabisco. All in all, use of an auction by the special committee has helped smooth out the process of acquisition and has supported the stakeholders’ vested interests.