St. Clement’s School (SCS) is an internationally recognized all-girls school in Ontario operating in a 40,000 square feet school building. Despite its commitment for academic and extracurricular excellence, the school faces a constrained space and hence is unable to provide adequate facilities for the rehearsal of plays and sports as well as hosting such competitions. On the one hand, SCS’s student community feels the dire need for expanded space and experiences dissatisfaction. On the other hand, the major rivals of SCS are already providing better sports and arts facilities with same level of curriculum. The school has an opportunity to expand its school building to double at a cost of approximately $11.6 million and incremental maintenance expense of $100 per year. We recommend that the school should go ahead with the expansion and finance it with an extensive fundraising campaign raising an average of $7 million and increasing the enrolment by at least 49 students. The detailed explanation of the alternative is presented in the second last section. 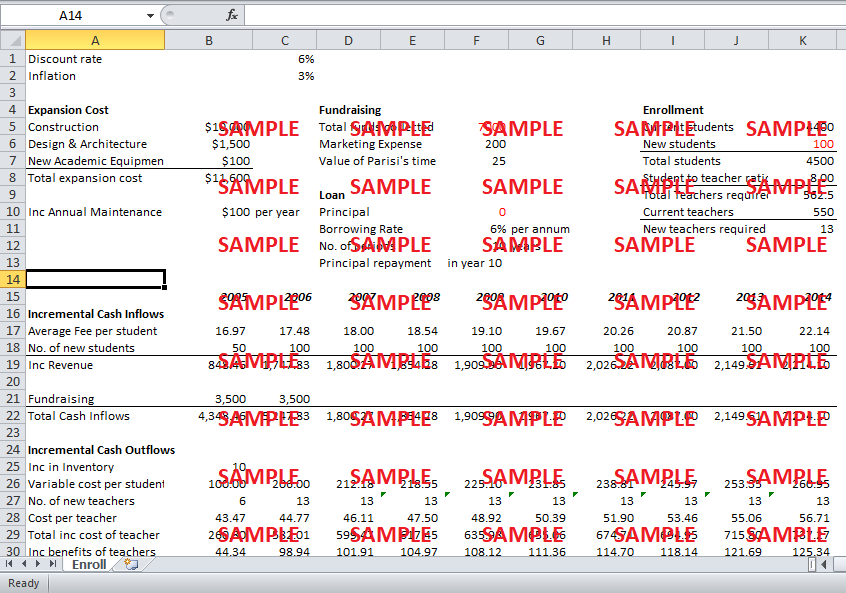 2. Explanation of the Problem

St. Clement’s School (SCS) is an all-girls school in Ontario which was founded in 1901 by Canon Thomas Wesley Powell. Since inception, St. Clement’s School has been “encouraging academic excellence, self-confidence, leadership and independent thinking” in woman and attempted to provide “an enriching [and] supporting environment.” Currently, in November 2004, the school faces a decision that is whether to further expansion of the school facilities. The current building of SCS is located on a 40,000 square feet area including a gym, an auditorium, a library and a lunchroom. The proposed expansion will add another 44,000 square feet of constructed area. The expanded building can be used for multiple reasons such as increase no. of classrooms, expand the library, lunchroom, gym and performance space and provide more and better lockers or storage space to the students. Currently, the president of the school, Patricia Parisi needs to analyze various alternatives of funding the expansion in order to reach the conclusion about whether or not to undertake the project. In this report, we provide detailed analysis on behalf of the president baed on the available information and appropriate assumptions.

The three main competitors of St. Clement’s School are Havergal College, Bishop Strachan School and Branksome Hall, all of which are all-girls schools. Unlike St. Clement’s School, all the competitors offer much larger campuses and more facilities for arts and athletic activities than St. Clement’s School. Furthermore, they provide boarding as well while St. Clement’s School does not. On the other hand, the number of students in all the schools is more than double that of SCS. SCS offers the lowest student-to-teacher ratio of 8:1 while the other schools have the ratio ranging from 9 to 15 students per teacher. Moreover, the fee of SCS is the lowest among all schools. In short, there is a high probability that SCS may lose its competitive advantage of smaller class size at a more affordable price due to its cramped environment and lack of up-to-date facilities for extracurricular activities. Hence, if SCS can maintain its student-to-teacher ratio and price without increasing the number of students too much, it can not only secure but further strengthen its reputation in the community.

As the main stakeholders of the school are current students and their parents as well as former students and their parents, the school should keep their concerns above all, and attempt to increase their satisfaction level. Furthermore, the decision should be aligned with the objectives of the school such as no compromise on the quality of curriculum and faculty while promoting an all-enriching environment that is necessary for the students to flourish in academic and extracurricular activities. Finally, the expansion project should not come as a burden on the current and future students.

3. Analysis of the Situation

The key decision to be made is to identify the appropriate source of funding for the project. There are four main alternative sources available that are fundraising, loan, increasing student strength and increasing tuition per student. The pros and cons of each source have been modelled quantitatively in this section while the qualitative implications will be discussed in the next section. Firstly, Table 1 summarizes the expenses related to the expansion project.