Income statements and balance sheets for the company, using both the standard costing system and actual costing system, can be prepared by using the information given in the previous balance sheet and the actual cost consumption data during the month. The standard costing estimates of the company show that the company expects to spend four pounds of raw materials for each plate at a rate of $2.6 per pound. For direct labor costs, the company expects that each plate requires 0.6 hours of direct labor at the rate of $12 per labor hour. The last component of standard costs of plates, the overhead cost, has been estimated to remain at $4.45 per plate. Thus, the standard cost for the product estimated by the management remained $21.65 per plate. However, the actual cost incurred during the month remained $22.18 per plate. The journal entries for all the accounting events in the month have been shown in the excel sheet. 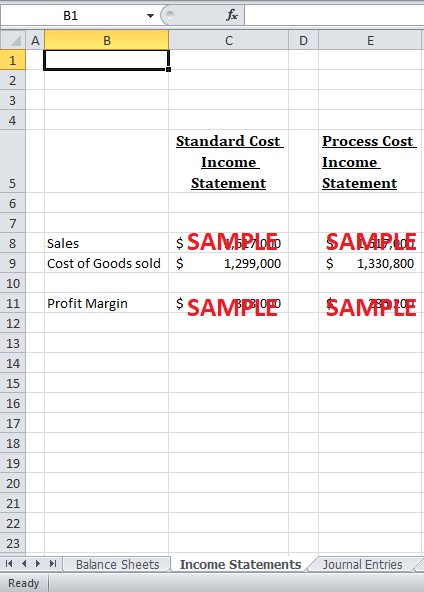 Cash and accounts receivable have adjusted in the journal entries under the account head “other assets”. Since actual cost per unit remained higher than the standard cost per unit during the month, profit calculated using the actual cost as the cost of goods sold remained lower than that calculated using standard cost. Since the company used the LIFO method and out of 80,000 plates produced only 60,000 were sold, the remaining 20,000 plates and raw materials were recorded in the respective balance sheets according to the corresponding inventory costing method.

Explain the differences between the two sets of financial statements. Which costing method should Dang use? Why?

Actual costing or the process costing method is used by companies that manufacture uniform products in batches. In this costing method, actual cost data for direct labor, direct material and the overhead are allocated to the product based on the overall average. As compared to Actual costing, standard costing is a relatively complex costing system in which a standard cost is estimated by the management for the product in a production budget. The management records the inventory at this standard cost, and the difference between actual and standard cost is maintained in a separate account named variance.

The asset side of the two balance sheets remained different because of difference in recognition of two components i.e. raw materials and finished goods. In standard costing method, raw material and finished goods produced during the month were recorded in the balance sheet at the standard rates defined by the management for direct material, direct labor and overhead expenses. These rates remained different from the actual costs incurred during the month in lieu of direct material, direct labor and overhead.  Other than raw materials and finished goods, all other head remained the same for both the balance sheets. On the liability side, retained earnings head remained for both the balance sheets because of difference in the profit recognition of the two methods. During the month, 80,000 plates were produced while only 60,000 plates were sold.