J.C Penny Company is one of the most competent and trusted Brand in the industry of apparel and home furnishing retailers. It has been serving the diverse range of its customers with unparalleled style, quality, and value since 1902. Since its inception, the company has always preferred its customer’s preferences and attained their trust. The executive management of J.C Penney remained committed to ensuring significant growth with every passing year; their consistent struggle is the only reason for the current magnitude of the company. There are approximately 1020 retail stores which the company is operating in the 49 states of USA (J.C.Penney Company, Inc., 2015). Apart from selling the conventional merchandise, J.C Penney also offers leased departments like salons, optical centres, and portrait studios. 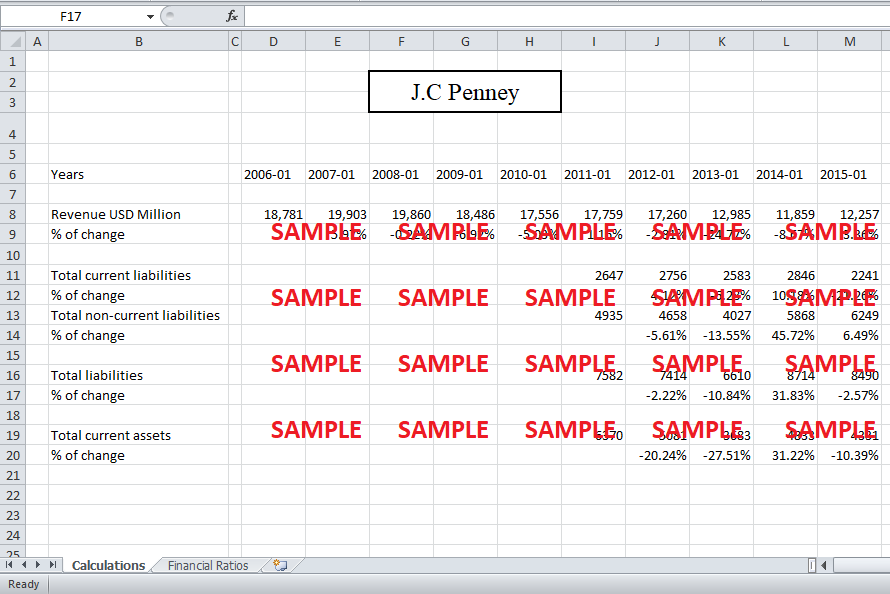 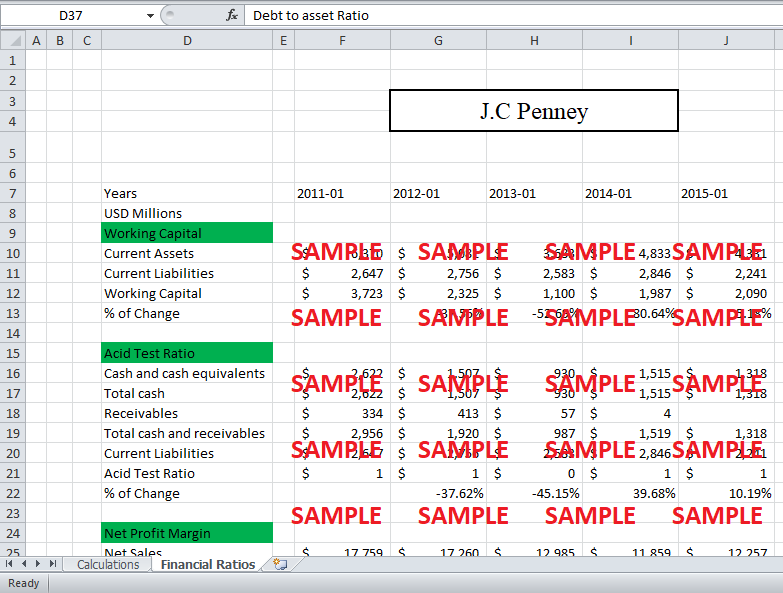 The company has performed above the expectations of its stakeholders over the past years except the last three years particularly except 2013. The management always remained enthusiastic to introduce new gears to the company relating to the current customer needs. This responsive behaviour to the customer needs to be stabilized the company in the competitive market. By analysing the financial statements, one can access that the company has been growing with the concrete financial bases in the past decade. But a decline was observed in the performance of the company from the year 2012 to 2013 which the company recovered in 2014 (J.C.Penney Company, Inc., 2014). The revenue of the company considerably declined in the year 2012, but the liabilities were written off and hence abridged.

The revenue reduction increased to 24% of the previous year’s revenue, which shows that the company remained unable to attract a greater pool of its customers in 2012. The reduction in the revenue maintained and further decreased by 8% in 2013. The company has been facing the most difficult time over these years, but the management handled the situation and prevented it from getting worse. The company efficiently recovered its receivables to tackle the leverage created by the reduction in the revenue. Further the company has to sell its assets in order to satisfy its liabilities. Management took these steps in order to decrease the leverage faced by the company. No doubt the revenue was reduced, and the company has to close 22 underperforming retails stores and lay off around 2000 employees, but the company also managed to reduce its current liabilities and accounts receivables (J.C.Penney Company, Inc., 2013). The annual revenue of the company that is a potent indicator of its performance again increased in 2014.

In 2014, J.C Penney regained the momentum of its growth, and the company is expecting to further increase its performance by certain customer-oriented initiatives. The company has sufficient cash, and cash equivalent assets to satisfy its current liabilities and the trend shows that the company would be able to increase its margin over the next years. The company has successfully reduced its accounts receivables to safe range, and it is expected to maintain that level. In the year, 2013 and the liabilities on the company increased significantly which is due to the exaggeration of short term and long term debt. The company acquired 45% more long-term debts in 2013 as compared to the previous year that resultantly increased the total liabilities of the company by 32%. The company also faced a reduction in the current assets which increased the risk for a company to liquidate, but the risk was in the relevant range.

The performance of the company can be best described by the financial ratios, as these ratios depict the different aspects of company’s existence and its position (Magoon, 2008). The strength of a company can be determined by the worth of its working capital. As the working capital is the net of its current assets and current liabilities; hence, it ensures the company’s capability to sustain in any uncertain and unforeseen circumstances. The working capital of the company is increasing after the severe decline in 2013; this, shows that the company is becoming more stable and its capacity to absorb uncertainties is also increasing.

Acid test ratio depicts the strength of the company by evaluating the worth of its current assets after satisfying its current liabilities. This ratio specifies the liquidation position of the company. By analysing the trend of the acid test ratio, it can be stated that the Company had faced serious liquidity risks in 2013, but later the company managed to increase this ratio.