Lyon had issued long-term bonds about a decade ago. The prevailing interest rate at the time of issuance was higher than the current interest rate. Therefore, the company is considering replacing its outstanding higher coupon bonds with new lower coupon bonds. The executives of the company are under the impression that the new bonds will be beneficial to the company because of its lower coupon payments. However, the interest savings from lower coupon are theoretically offset by the premium that might be paid for redeeming the higher coupon bonds. Theoretically, the refinancing transaction should not add any value to the company. However, the transaction could have income statement implications. The company is expected to realize a large loss in the year in which the transaction occurs, while the earnings are expected to be higher in subsequent years. 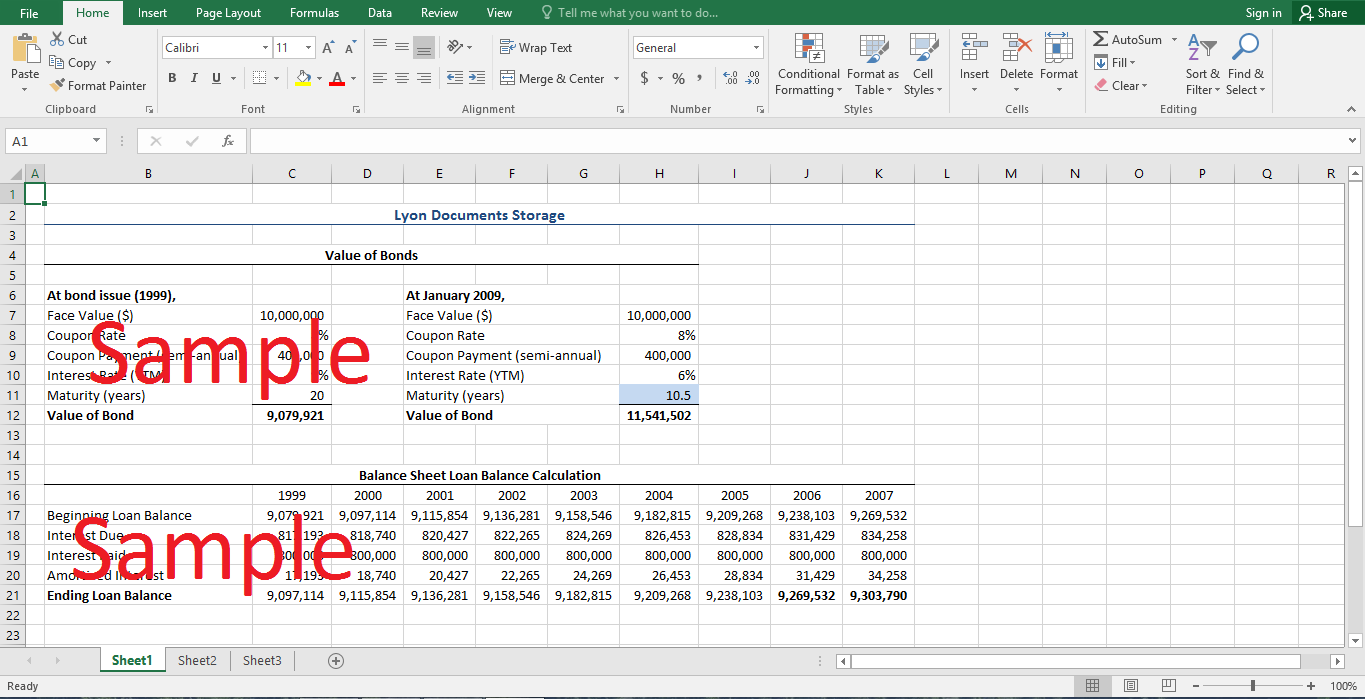 1. Explain what is meant by the terms ‘premium’ and ‘discount’ as they relate to bonds. Compute exactly how much the company received from its 8% bonds if the rate prevailing at the time of issue was 9%. Also, re-compute the amounts shown in the balance sheet at December 31, 2006 and December 31, 2007, for Long-Term Debt. What is the current market value of the bonds outstanding at the current effective interest rate of 6%?

Since the prevailing interest rates (or the yield to maturity) on the bonds was greater than its coupon payments, the bond is expected to be worth less than its face value of $10million. The exact worth of the bonds will be such that they yield a return of 9% on their market price. The price can be calculated by discounting the future cash flows of the bonds at the 9% discount rate. The process can be easily performed on a spreadsheet. The attached spreadsheet calculations reveal that the bond was expected to be priced $9.080 million at its issue. The spreadsheet also calculates the value of the bond at the current time-period. Note that the inputs for the bond calculation at the current time-period differ only in the time remaining to maturity (10.5 years) and the interest rates (6%). The face value, which is also the maturity value of the bond, and the coupon payments remain the same as they were at the time of bond issue. The current price of the bond is calculated to be $11.542 million, which is the same as the actual market price mentioned in the case.

Note that the balance sheet amounts of the bonds could be drastically different from the market value. Although it is possible to report bond at their fair (market) value in the balance sheet, Lyon records its assets and liabilities at historic cost, which is not dependant on changes in market variables. At the issuance of the loan, the value of the loan is recorded at the net proceeds received from the issue. Since the bond was issued at a discount and the company would be required to pay the full face value of the bond at maturity, the loan liability should be expected to increase with time. Lyon calculates this increase in bond liability using the effective interest method. The effective interest is calculated by multiplying prevailing interest rate at the time of bond’s issue with the loan outstanding at the beginning of each year. The difference between the effective interest and actual coupon payment is adjusted in loan liability. If the effective interest is greater than coupon payment (which is the case with bonds issued at a discount), the difference is positive and increases the bond liability with each passing year. Using this method, the loan liability for Lyon has been calculated in the attached spreadsheet. The liability increases with each passing year. Note that the loan liabilities at the end of 2006 and 2007 are slightly higher than the actual balance sheet amounts because of the issuance costs, which have also been deducted from the carrying value in the balance sheet.

2. If you were Rene Cook, would you recommend issuing $10 million, 6% bonds on January 2, 2009 and using the proceeds and other cash to refund the existing $10 million, 8% bonds? Will it cost more, in terms of principal and interest payments, to keep the existing bonds or to issue the new ones at a lower rate? Be prepared to discuss the impact of a bond refunding on the following areas:

It is obvious that Lyon will have to pay a lower coupon payment on the new 6% bonds. The existing bonds incur a cash outflow of $400,000 in semi-annual payments, while the new bonds could be issued for a semi-annual coupon payment of $300,000. Therefore, the company stands to save a perpetual amount of $100,000 per every six months over the next ten years. Moreover, the final face (settlement) value of both bonds is expected to be the same – $10 million. Therefore, the net benefits from the lower coupon bond can be calculated by computing the annuity value of $100,000 semi-annual payments over a period of ten years, discounted at the prevailing interest rate of 6%. The calculations, included in the attached spreadsheet, reveals that the present of value of benefit received from the bond refinancing is expected to be $1.488 million.

However, the current 8% coupon bonds are currently trading at a premium. Therefore, the company could be expected to pay more than its face value of $10 million to acquire the bonds. The old bonds are expected to be replaced with the new bonds by July 2009 when there are exactly ten years remaining to the old bonds’ maturity. Therefore, it is important to calculate that market price that Lyon will be expected to pay in July 2009. This price can be calculated using the attached spreadsheet, by reducing the maturity of the bond (highlighted cell) from 10.5 years to 10 years. The fair price of the bonds is expected to be $11.488 million at the time of refinancing (July 2009). This price represents a premium of $1.488 million, which is exactly equal to the net benefit from the refinancing calculated earlier. Therefore, the benefits from the refinancing are exactly offset by the premium payable on the higher coupon bonds and there is no net benefit to the company.

It is clear that the present value of the cash flows remains the same if the refinancing is under taken. However, the timing of the cash flows becomes different. The company will incur an initial net cash outflow that is equal to the premium payable on the higher coupon bonds. The initial outflow is later offset by the reduction in periodic cash flow resulting from lower coupon payments. The effect on the company’s earnings is also very similar.