Both companies are interested in business combination through merger on account of various benefit which may be materialized from the potential merger deal between Sherwin Williams and Valspar Corporation. These benefits may include cost savings from synergies, expansion of footprint, access to new markets, growth in revenues and increase in value of shareholders. The offer price of USD 106 is currently considered by Sherwin Williams however after determining the intrinsic value of the  share of Valspar Corporation, the offer price may be reconsidered by the company. The intrinsic price has been estimated using the discounted cash flows approach for the stand-alone company. The free cash flows to the firm have been determined which were discounted using the appropriate weighted average cost of capital. 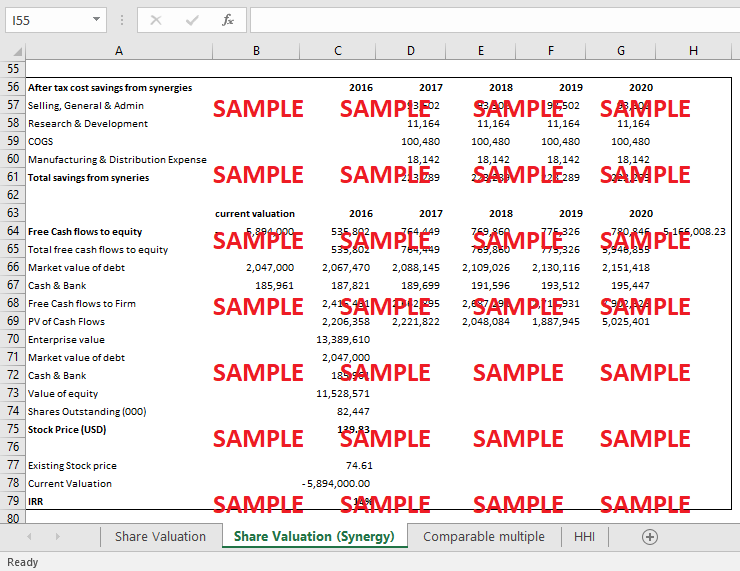 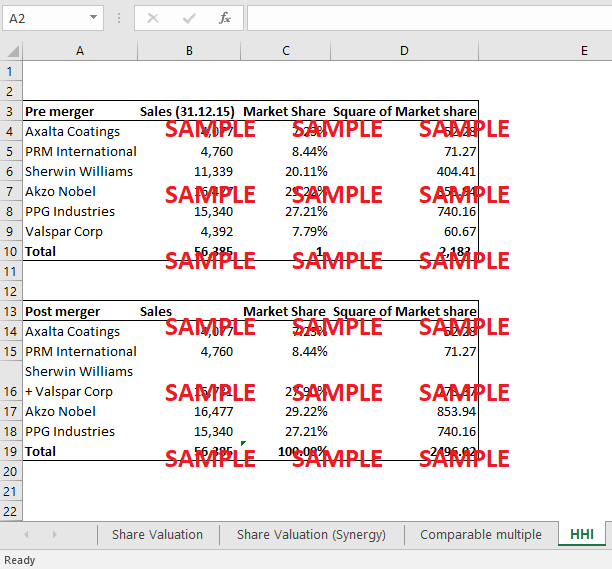 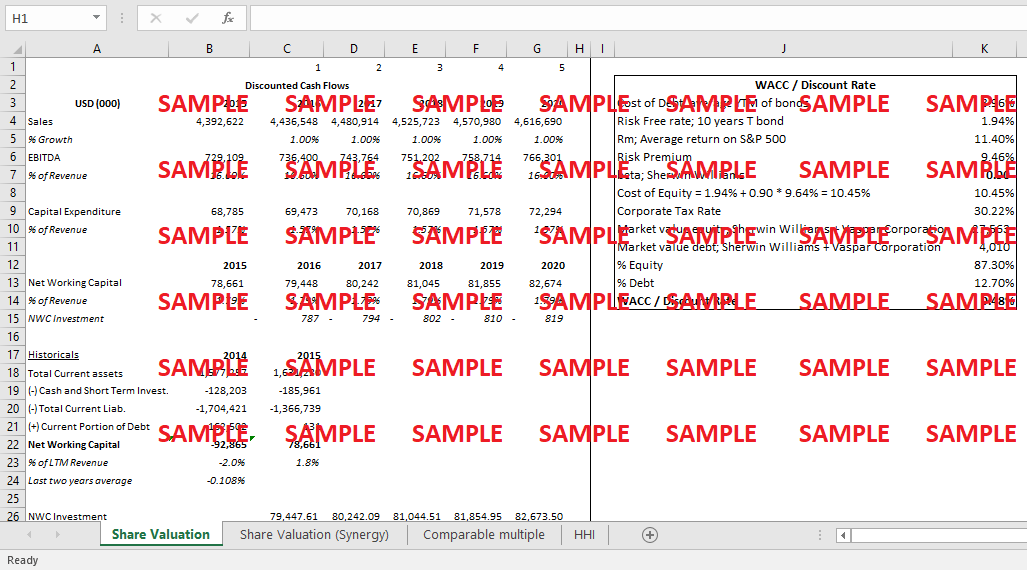 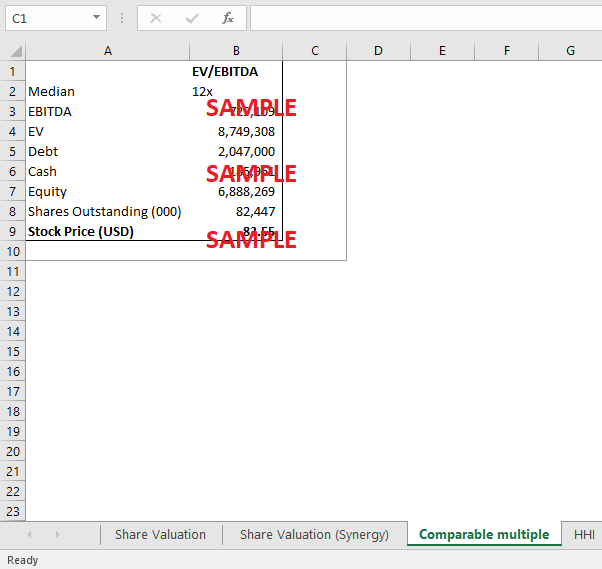 The relevant discount rate WACC has been estimated from the cost of debt and cost of equity for Sherwin Williams. The cost of debt is the average of the Yield to Maturities on the outstanding debt of the company. The cost of debt has been adjusted by the relevant tax rate to incorporate the effect of the tax shield of the interest expense. The cost of equity is the sum of the risk-free rate and the risk premium adjusted by the beta of the firm. The risk premium is the difference of the market return (average return on S&P500) and the risk-free rate while beta of Sherwin Williams is 0.90. The capital structure of the new firm (Sherwin Williams + Valspar Corp) is being used to determine the market weight of debt and equity. The WACC comes out to be 9.48% (Appendix B). The free cash flows to firm are being discounted at WACC. The terminal value calculation includes a sensitivity analysis whereby three different growth rates (0%, 1% and 2%) has been taken while an average terminal value was used for discounted the cash flows.

Similarly, the discounted cash flow approach was also used to determine the effect of cost savings from synergies on the value of the firm thereby value of the shares. The cost savings has a positive impact on the value and derive the share price upward (Appendix C). Lastly, the comparable multiple approach also estimates the share value which may differ from the discounted cash flows indicating the stock may be undervalued by the market and may have huge upside potential. In this regards, Sherwin Williams may have an idea of the maximum price to quote to the firm. The merger may not result in the “anti-competition” in line with the guidelines of FTC and DOJ. The HHI score also indicates that the market power may not increase to the extent whereby the new entity will exercise material control upon market.

1. Why is Hendrickson motivated to explore a business combination with an industry competitor? Similarly, why Sherwin-Williams intermittently contact Valspar over the three decades to indicate an interest in exploring a business combination? Give numeric example with reference to the excel calculation

The paint manufacturing industry was a highly concentrated with few firms controlling the substantial market share wherein Akzo Nobel and PPG Industries had the highest market share. Valspar’s was the fifth largest company in the industry and was operating in the highly competitive environment. The revenues of the company have observed stagnant growth while in FY15 the revenue growth was negative and decreased from USD 4.65 Billion in FY14 to USD $.392 Billion in FY15. The management of Valspar may be concerned about the growing maturity of their business model and limited potential of upside in the value of shareholder going forward. In this regards, the Valspar’s board is motivated in a business combination with an industry competitor. The strategic combination may bring various benefits for the company which initially include payment of premium to existing shareholder above their existing market price.

Moreover, Sherwin Williams may also have similar interests whereby they are also witnessing slow growth in the revenues. Since, both the companies have different sales & distribution channels whereby Valspar sold through independent hardware and home improvement chains while Sherwin Williams operated its stores across North America. The combination would allow the companies to access to different sales channel and expand their footprints in other markets. Moreover, various cost savings might be materializing from the combination of the two firms as indicated by Appendix C, the amount of cost savings from various channels amounted to USD 223 Million in 2017 and will follow in the subsequent years as well. In this context, both firms may be interested in the business combination.

2. Is an offer price above $106 per share in the best interest of shareholders, based on the stand-alone value and the projected synergies? What maximum price could he justified in a bidding contest?

The decision to offer price above USD 106 may depend on the intrinsic value of the stock. The intrinsic value of the Valspar’s share has been calculated  by three method 1) standalone value through discounted value  (Appendix A) 2) discounted value with synergies (Appendix C) comparable multiple approach (Appendix D). For the standalone company valuation, the revenue has been increased by prudent growth rate of 1% in the projected period till FY20. The EBITDA margins, capital expenditures net working capital and depreciation was assumed to remain the same as in the previous years. The free cash flows to equity were calculated for the projected period. To derive the enterprise value, the market value of debt and cash was also considered as % of revenue for the subsequent years. For the terminal value, a sensitivity analysis was carried out whereby 0%, 1% and 2% growth rate were assumed for the terminal value. However, for the calculation of free cash flows, an average of the result of 3 values were taken. The free cash flows to firm were obtained by deducting the cash balance and adding the market value of debt for the respecting years.

The weighted average of capital was required for discounting free cash flows to firm which has be calculated in Appendix B. The market weight of debt and equity was used for the combined firm. The beta of Sherwin Williams was used to determine the cost of equity while the market return was the average return on S&P 500. Risk free rate was the rate on 10-years treasury bond while the cost of debt was assumed to be average of the YTM of the outstanding debt Sherwin Williams. The WACC comes out to be 9.48%. By discounting the cash flow, the value of share is calculated to be USD 131.90. While in Appendix C, after incorporating the impact of synergies, the value further increases to USD 139.83. The comparable multiple approach of EV/EBITDA suggest a value of USD 83.55. This means that the company’s stock is undervalued, and Sherwin Williams can justify a maximum price of USD 139.83 in the bidding contest.