Bed Bath and Beyond: The Capital Structure Decision Case Solution

Bed Bath and Beyond was founded by Warren Eisenberg and Leonard Feinstein by opening two stores that dealt with the sale of specialty products. Bed and Bath was one of the earliest in 1080’s to start a trend of large retail superstores where the whole range of home furnishing was available. Since then, financial performance of the company has been exceptional, and it has emerged as the largest player in home furnishing industry of United States. As a result of extensive measures by the company to cut costs and generate sales, company has managed to finance all of the expansion through internal cash. As a result, even after spending millions of dollars for expansion, company is still left with $400 million. Although this cash rich position demonstrates financial strength of the company, some analysts believe that this is an inefficient use of cash. Rather than piling up cash and earning low returns in the short term investments, company should take advantage of low costs of debt and go for leveraged recapitalization. 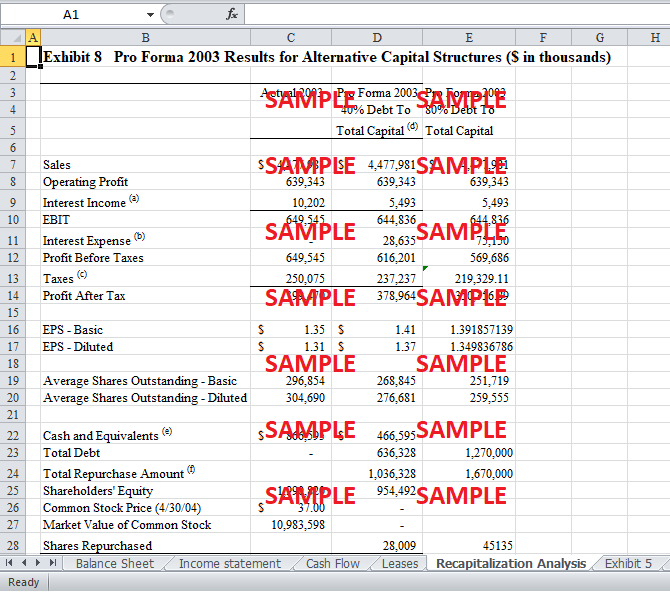 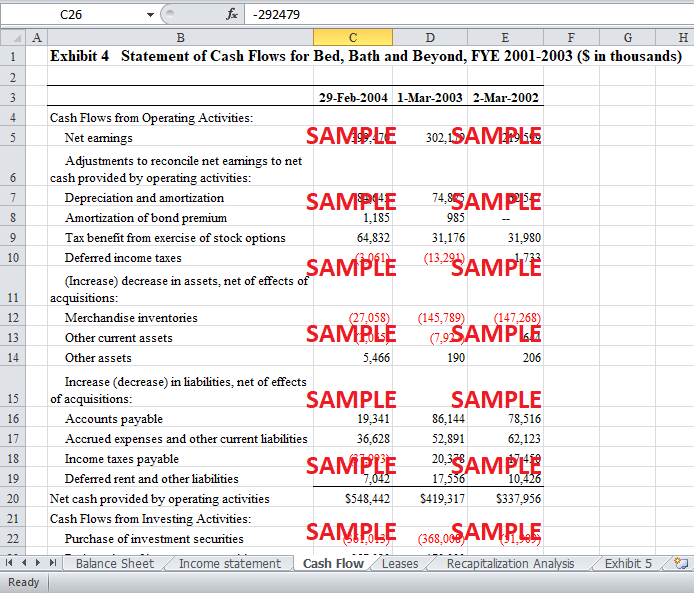 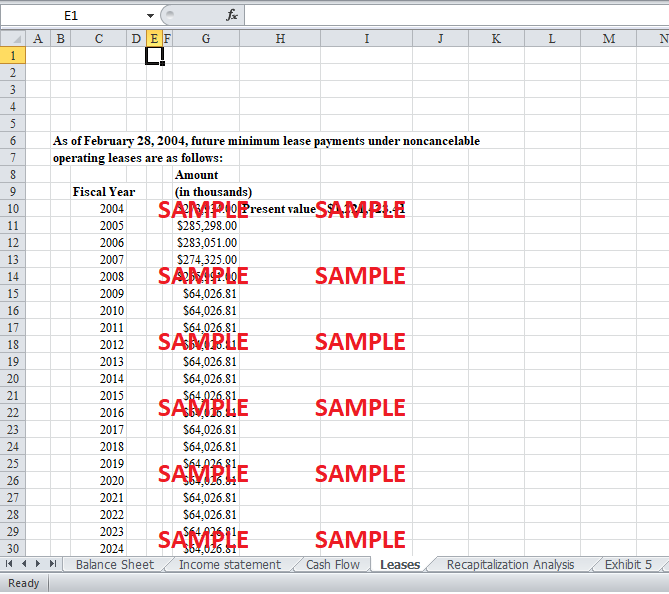 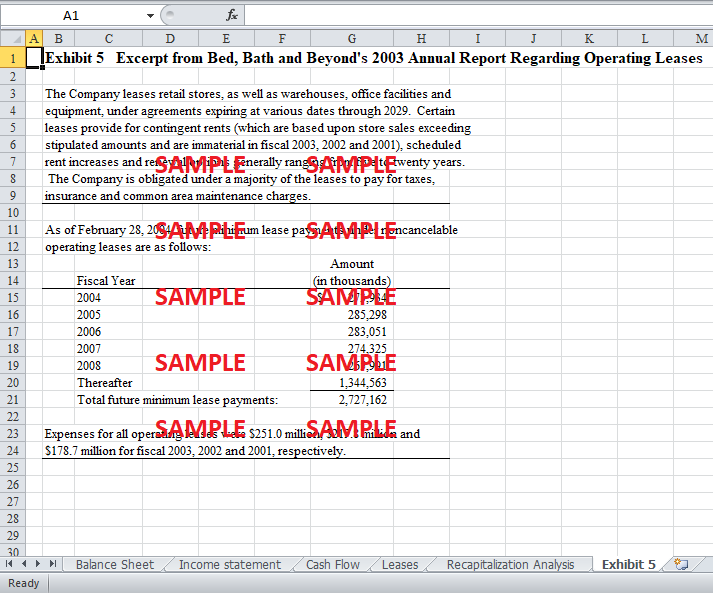 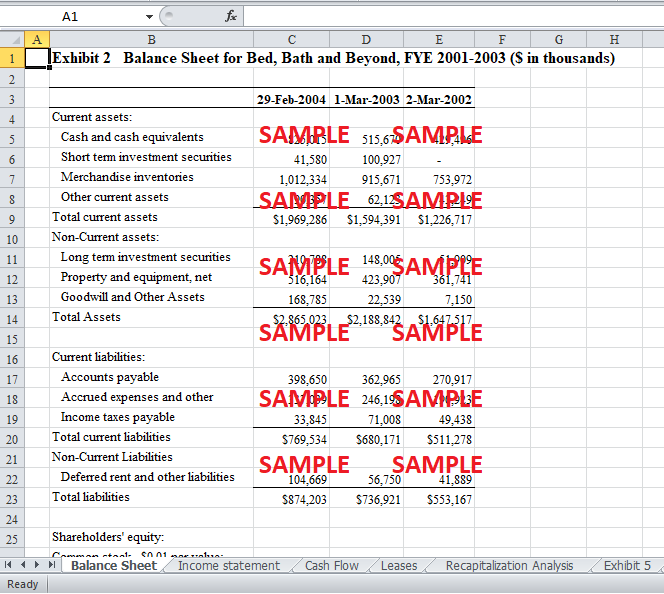 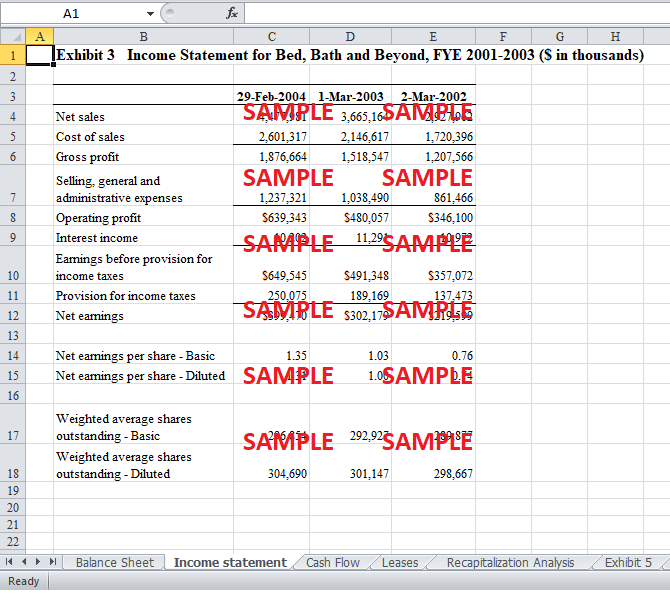 Bed Bath and Beyond The Capital Structure Decision Case Analysis

1. How would you characterize the business risk of BBBY? Review the financial performance.

Bed and Bath is operating in retail industry, is one of the most competitive industries of all in the world. That is why, despite being the largest superstore domestic player in the industry, Bed Bath was catering only to 4% of the whole market. Although, home furnishing industry was growing at an enormous speed, still the companies had to compete to even maintain their share of the market. In addition to direct competition from competitors like Linens-N-Things, Pier 1 and Williams Sonoma, Bed and Bath also faced indirect competition from discount stores like Wal-Mart and Target. In such a competitive industry, the only way a company could expand and grow was by differentiating its products and services in terms of quality and price. Bed and Bath had succeeded in achieving these objectives by constantly updating the merchandise mix constantly and by making the shopping more convenient as compared to competitors. Low price strategy and high level of customer services enabled Bed and Bath to operate on economies of scale, and hence earn higher margins than competitors, despite keeping the prices low. Threat of new entrants was not high for Bed and Bath because the company had first mover advantage and a lot of capital to invest in core competencies to sustain that advantage. In home furnishing business, threat of substitute products is moderate products and their prices are quite similar. Therefore, even if a new entrant enters the market, they will have difficulty in getting favorable terms from suppliers because there is not much to negotiate about. Firms that have already established themselves are in a much better position to exploit the opportunities of growth in the industry. With better inventory management, broader range of merchandise mix and cost leadership, bed and Beth has not faced significant business risk as long as it can maintain these core competencies and differentiate itself from competitors. Financial performance of the company has been exceptional almost through the history of the company. Therefore, cash rich position and ability to operate on lower costs enable the company to increase the market share in the current scenario.

2. Is BBBY a good candidate for increased financial leverage? What are the pros and cons for increasing the leverage of the company?

3. Does BBBY really have no debt? What does the balance sheet look like after adjusting for operating leases?

Operating leases are in essence as long term liability for the company. The current 44% debt to equity ratio of the company takes into account current liabilities associated with leases. Present value of these lease payments comes out to be $1,221.4 million. In the balance sheet, these figures will be regarded as long term liabilities. So, when these operating leases are taken into account, debt levels of the company increase as a percentage of total assets and equity.

4. Do you think BBBY has too much cash? Should BBBY lever up? Consider both the 40% and 80% debt-to-total capital proposals.

Although balance sheet of BBY is strong, risk associated with carrying too much cash is also quite high. When investors see cash piled up on the balance sheet and earning very low returns in short term investments, they feel an inefficient use of cash and sense a lack of growth opportunities. Too much cash piled up means that returns of the investors are not being maximized because of poor cash management. While BBY uses their cash for small acquisitions and store growth, rest of the cash should also be used to in a way that increases the shareholder value.

If, Bed Bath Beyond uses $400 million of the excess cash and $636.3 million in funds raised through borrowing to repurchase its shares, basic earnings per share of the company will increase from 1.35 to 1.41. It can be seen that diluted EPS has moved from 1.31 to 1.37. Current share price of the company is $37 per share. So, when $1036.3 million are used for repurchasing shares; it means that number of share outstanding decreases by 28,009. If, on the other hand, BBBY was to use $400 million in excess cash, and borrow $1.27 billion to repurchase their shares, the number of repurchased share at current share price of $37 comes out to be 45,135. Although the number of shares outstanding decreases from 296,854 to 251,719 thousand, still the EPS of the company less as compared to 40% scenario. Basic earnings per share will decrease from 1.35 to 1.39 and their diluted earnings per share from 1.31 to 1.35. This increase is less as compared to 40% scenario because interest expense increases so much that it does not compensate fully for the decrease in shares outstanding.

Bed Bath and Beyond: The Capital Structure Decision Case Solution