The change in the two methods comes from the portion of the cost allocated to the charge. The RCC method is relatively simple as it allocates the same percentage of charge to the cost. As seen in the Exhibit 1, after deducting the cost from the charge of each visit the amount of profit comes around $420. On the other hand, TDABC allocates the cost to charge based on the utilization of resource about a particular procedure. Hence, the procedure which consumes less time will get less cost. The total cost under this method comes out to be $381. Thus, the RCC method reports higher profit as compared to the other method. 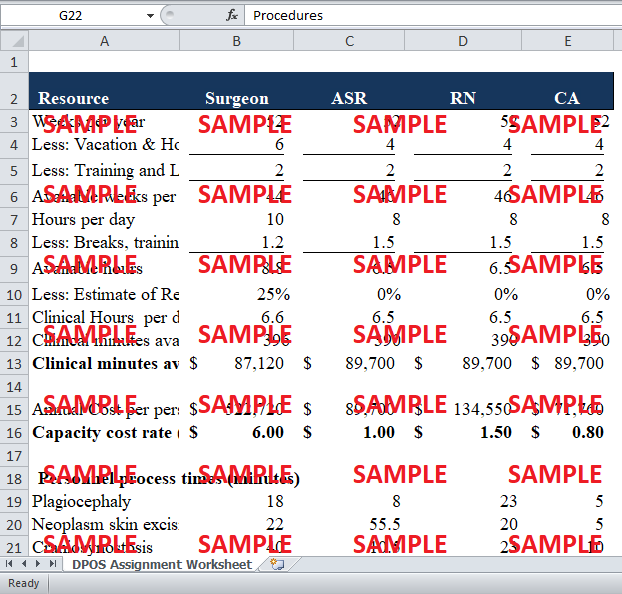 1. The state has recently decided to expand its insurance coverage to all the residents which have affected the market for pediatric care. Moreover, the rise in the cost of health care has allowed the providers to receive risk adjusted payments only. There was less competition from the other hospitals. Tuft's Floating Hospital was the major competitor.

The strengths of the hospitals come from the fact that they have highly competent physicians and state of the art equipment. They provide high quality care and conduct cutting-edge research. They were the only hospital to provide care for a rare disease such as Bubble Boy Syndrome and Wizkott Aldrich. They had top-ranked specialties Heart & Heart Surgery, Neurology and Neurosurgery.

The weaknesses stem from the fact that there was immense local pressure to maintain the quality of service while still researching for new endeavors. Moreover, the objective to reduce cost was also there. It was difficult to compete with other institutes as they were given subsidies from other established divisions. Hence the cost to operate comes down to a lower level. Hence less subsidies and huge spending on research activities driving the total cost very high.

There are multiple opportunities for Boston Children Hospital which if capitalized can generate great benefit for the hospital. The hospital is in talks to launch Alternative Quality Contract which was the first doctor facility. When this would be implemented, fixed amount will be charged for three years. Hence the overall value will increase and at the same time benefits would cost less. There is also an opportunity for Boston Children Hospital to allow bundle payments for it has been approached by many public and private institutions.

The recent threat faced by Boston Children Hospital is attempts made by domestic council and private insurer to reduce their reimbursements. There is another threat that can reduce the footfall in the hospital. The contract that the BCH made with Hampshire medical program was failed. Hence the state's ability to send the patients to the hospital is seriously hampered.

2. The ratio of charge to expenses is calculated first to calculate the charge and margin using the RCC method. As shown in Exhibit 1, the total charge is around $12 Million and the expenses are around $7, Million. The portion of the cost to charge is 60%. The three office visits were charged $350 each. By multiplying it by the cost to charge ration, the total cost per visit can be estimated. Hence $210 is the cost, and remaining amount goes to profitability.