Major focus of the Hill Country was on building shareholder value, which was applied, at every level of the organization and in all operating decisions. Company also showed a strong commitment to efficiency and controlling costs. Management also tried to reduce costs even when cost increases were due to external factors. Another major component of company culture was caution and risk aversion, which also explains the current capital structure of the company which avoided debt and investments were funded internally. Growth of the company was low risk and incremental, driven by investments in existing products and acquisition of small companies. As compared to the industry, Hill Country was unique with zero debt finance while other peers obtained the benefits of the debt financing. Many members of the investment community were frustrated by the company’s excess liquidity position and lack of debt finance. In the near future, it is expected that there might be a more aggressive capital structure in the near future and hence here current situation of the company would be evaluated along with three other scenarios with debt in capital structure and optimal debt to capital ratio would be selected for Hill Country. 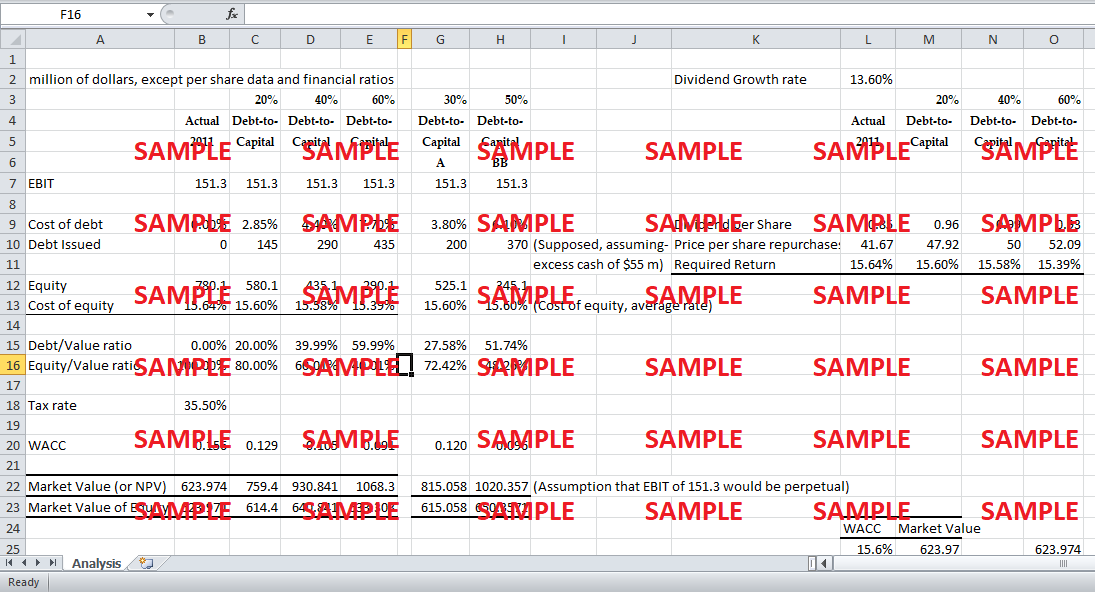 Company showed strong financial results through the combination of the efficient and low costs operations and all equity financing. It has high cash flow and paid regular dividends. But as the company has huge cash and capital structure without debt, it showed very low returns. Return on Assets and return on equity were quite low due to low returns, high assets and complete reliance on equity. Reduced cash increased debt financing and reduced equity financing can bring great returns. Hence, company is paying huge opportunity cost by having low returns on equity due to current capital structure. Company needs to have an aggressive capital structure by adding debt to its capital structure as this would increase the stock price and market value of the company by sending a positive signal to the market. Hence, shareholder would benefit a lot from this change.

3. Comparison of Financial Performance with the Industry

Competitors of the company carried high debt to capital ratios while Hill Country was totally dependent on equity financing. Both Snyder and PepsiCo, Inc. had very high annual growth rate of sales, in contrast to Hill Country. Net Profit of the company is 7.2%, keeping in view the efficient, and low cost structure while that of Snyder is 2.3% and PepsiCo 9.7%. Return on equity of Pepsi was 30.8% while that of Hill Country was 12.5%. P/E ratio of the both companies was also quite higher than Hill Country. Stock price of PepsiCo is $66.35 per share while the stock price of Hill Country is $41.67 per share. By having, debt structure, share price of the company and P/E ratio would increase due to positive evaluation of the investment community, to make these measures more competitive to PepsiCo and the industry. Return on equity would also increase making it more comparable to the giants in the industry.