The Brazilian education market is evolving due to the rising level of economic growth and higher demand for skilled workers. Hence, huge growth potential has been predicted by analysts like Morgan Stanley. Kroton Educacional SA is a noted player in the industry with a wide network of schools, post graduate education, and services pertaining to educational materials, including textbooks, course books, magazines, and other publications. Considering the success of Kroton, which established it as a leading company in terms of a number of students, Advent International announced in 2009 that it would invest R $280 million, a 1.3% premium per share over the last day trading price.

The following report will evaluate the nature of private equity investment by Advent International in Kroton. It will study how Kroton’s strategy will modify post-investment. The challenges faced by the company will be highlighted. Lastly, the premiums and discounts at which the investments are made will be justified in the light of which the share value of Kroton will be calculated through the DCF model and compared with the actual price. 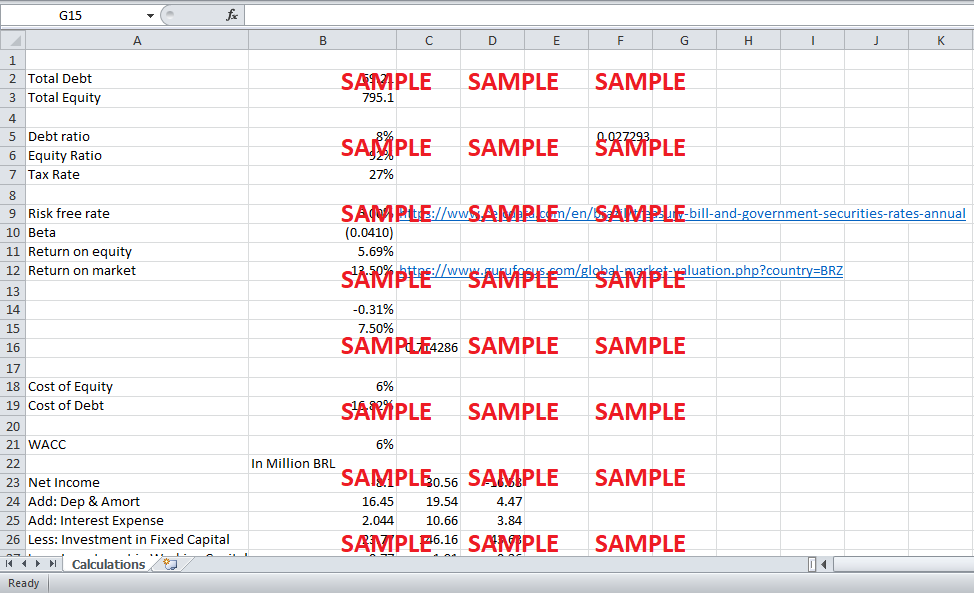 i. Advent International Investment in Kroton

In a typical private equity investment, the funds are raised from institutional investors and wealthy individuals, which is then invested to buy stakes in high potential businesses. Once a certain amount of funds has been raised, it is closed for the new investors. The purpose of private equity investment is mainly to generate high returns by investing in growth or venture capital (Hare & Steelman, 2008). The investment in Kroton by Advent International is similar to that of a private equity setting, as Kroton’s share price was declining together with the profitability, indicating that it was struggling despite significant growth prospects (Appelbaum & Batt, 2012). Also, the investment ensured three seats on the Board for the company, allowing the Advent Fund’s representatives to have a say in the decision making of the business. However, in private equity investment, the manager gets controlling interest. This is not the case for this transaction as the members who would get a seat on the board would act as independent advisors and not as controlling bodies to bring about operational improvements in the company since it would just have a 28% control over Kroton. This would mainly be because soon after the investment by Advent International, the share capital of the company will be increased as additional shares will be issued at a discount based on the subscription ratio, resulting in the dilution of Advent's investment (Lyon, 1984).

A major reason for Advent International’s Investment in Kroton was its strong growth prospects that showed potentially high profitability. Kroton had a diverse offering ranging from K-12 education and postgraduate degrees of varying time frames to cater to the middle, working, and upper middle class. The demand from all these segments was anticipated to grow, given the development of the economy and the need for having a higher literacy rate to meet the job demands of highly skilled workers. Also, as Kroton was the leading business in the education industry because of its large number of students, the injection of additional funds and bringing about operational movements would help in generating huge returns for the business.

Also, Kroton was very effectively able to develop its standardized platforms to benefit from economies of scale as it developed a set of procedures for the maintenance of quality. It then opened up new schools and campuses, which helped dilute its costs incurred initially, giving it a competitive advantage (Christensen, 2001). These were a result of the standardized academic plan, which meant less time spent on planning and coordinating, thereby ensuring quality.  Furthermore, the company shows strong sales pitch, cost-effectiveness, and proper marketing of its learning system. Still, the company was not being able to make sufficient profitability, as could be seen from its financial statements. It is for this reason Advent International considered investing in Kroton a reasonable choice as it aimed to use its independent advisors with strong industry expertise and operational know-how to transform the company's operations so that it starts producing higher yields (Cumming, et al., 2005).

It can be understood that the current strategy of Kroton has been focused on organic growth, as discussed above, as it aims an increasing opening number of campuses and getting additional licenses to be able to start new schools. It focuses on this business model as a means to cut its costs and benefit from economies of scale. This is the reason why its costs are lower than its competition, reflecting at lower prices and justifying the higher number of students.

iv. How would Advent International Investment modify the Strategy of Kroton

The current strategy, as indicated, is focused on acquiring and opening new schools and campuses to cut costs. However, this is not a long-term approach as now the competition from public schools has also increased owing to their reasonable pricing due to the high budget allocated. This would mean that the number of students would get divided among the public and private sectors as the curriculum would be the same. By having its advisory members on the board of Kroton, Advent International would focus on diversifying the business model of Kroton to integrate its resources to enter new segments like private learning and distance learning, where the competition is less, thereby allowing higher margins (Iacobucci & Rosa, 2005).

By injecting additional funds, it would be able to explore new avenues required for entering new segments. It may use its industry knowledge and resort to marketing practices to develop a unique selling proposition for the company that would help generate a loyal base of parents who would be willing to send their children to the respective schools under the umbrella of the company. Hence, this way, Kroton would be able to enter new markets and increase its revenue base (Stan, 1997).

A major challenge faced by Kroton related with its existing strategy of focusing on cost-effectiveness through the standardization of its curriculum. A major challenge was the implementation of the same model on other segments of the education industry, ranging from public schools, distant learning institutions, and post-secondary educational institutions.

It has been predicted that the budget allocated for public schools is likely to grow in the future, which is why the demand for private learning institutions will rise as the students might switch to them to get additional academic help to meet the set academic goals. Hence, this poses a challenge to Kroton as it would receive aggressive competition from the public schools, given the same course content, and hence would have adhere to aggressive pricing policies to retain its market share. This, in turn, would eat up its profitability.