This case study deals with the valuation of Liston Mechanics Corporation Limited by the management of South Atlantic Corporation. The company is planning for the solution of expansion and to establish itself as a market leader, and CEO of South Atlantic Corporation has decided to do that by acquiring other companies operating in the same industry but with an established infrastructure. The CEO, Jack Charlton, is trying to find out the intrinsic value of the target company so as to offer an appropriate price. The case deals with finding out the intrinsic value of Liston Mechanics Corporation using Discounted Cash flow method and Multiples approach. The case then goes on to compare the value of the company calculated by two different approaches i.e. multiples approach and discounted cash flow approach. 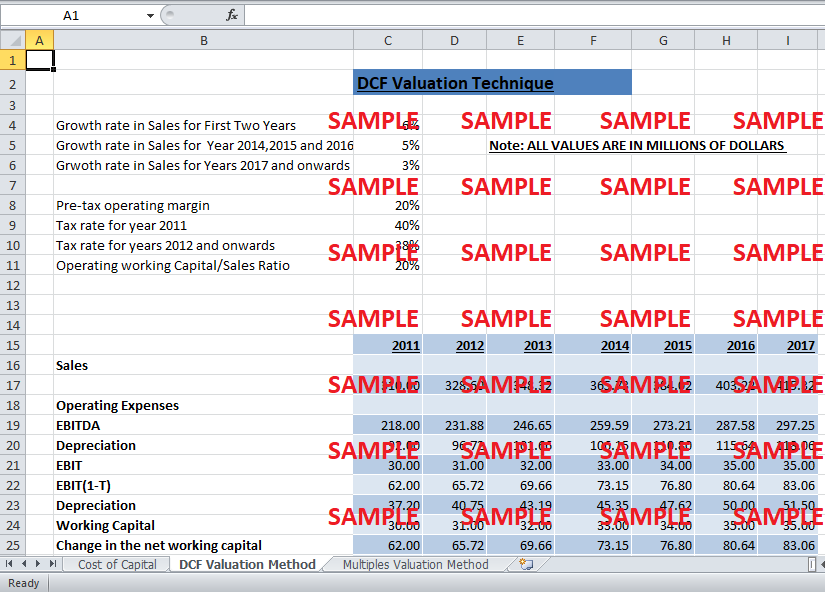 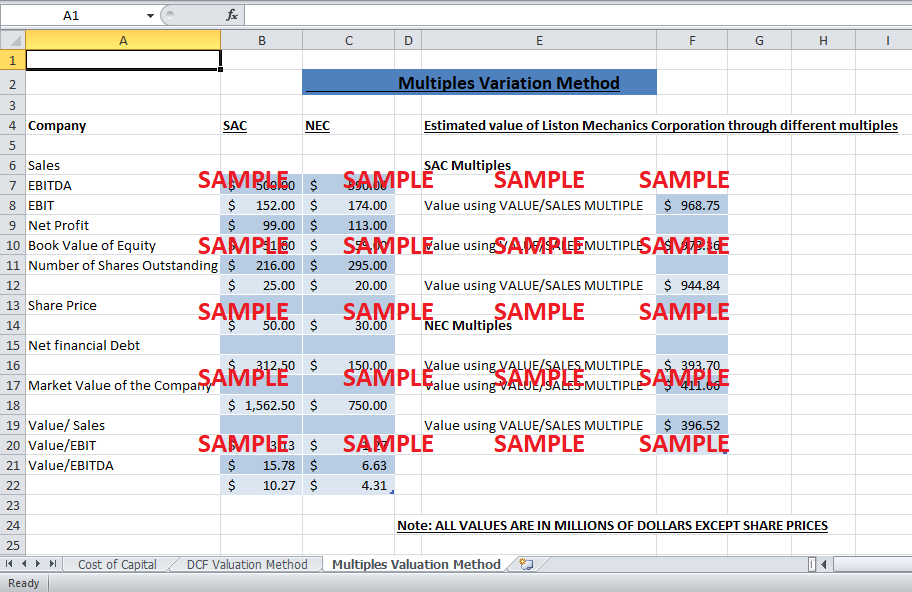 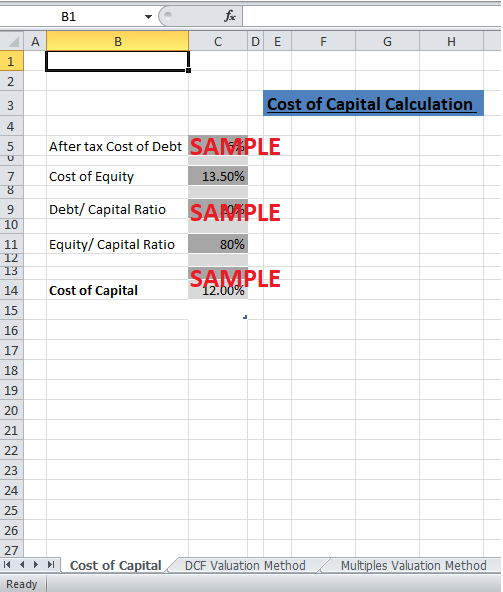 1. Prepare a five-year forecast of the Free Cash Flows for LMC.

Free cash flow is the cash that is left behind after using the profit earned for the meeting out expenses related to capital and working capital. The formula for the calculation of free cash flows can be given as follows:

So, in order to calculate FCFs, first, there is a need to calculate EBIT for all the years to come. The sales value for the year 2011 has been given in the case as $310 million. In order to calculate EBIT, it is necessary to predict sales and the corresponding expenses for the upcoming years. It has been estimated by experts at South Atlantic Corporation that the growth rate of sales of LMC for years 2012 and 2013 to be 6%, for years 2014, 2015 and 2016 to be 5% and for all the years beyond 2016 to remain at 3%. Therefore, sales value for all the years after 2011 can be found out by using the estimated growth rates. Furthermore, it has been mentioned in the case that depreciation will increase by $1 million for the next five years to come until it becomes $35 million, after which, it will remain constant. Furthermore, the management also believes that EBIT/Sales ratio, which is currently at 20%, can be decreased in the future due to synergy created by the combination of the two companies. It has been assumed that this ratio will remain at 20% for all the years to come. Since the sales value has already been estimated for the next five years, EBIT values can be estimated easily for all these years by multiplying the sales value with 20%. Once the EBIT, has been estimated for the next five years, EBITDA can easily be estimated by adding back depreciation value to the EBIT value. This is because EBIT is calculated after deducting depreciation from EBITDA, so in order to find out EBITDA, we can add together depreciation and EBIT. This relationship can be expressed mathematically as follows:

After calculating EBIT values for the next five years, the next task is to find out the after tax value of EBIT or EBIT (1-T). Although the current tax rate is 40%, the management of the South Atlantic Corporation is of the view that conservative and more efficient management of tax can bring the effective tax rate to 38%. So, for the year 2011, the tax rate of 40% will be used while for the next five years, tax rate has been assumed to be 38% for finding out EBIT (1-T).

After finding out EBIT (1-T), the next step is to add back the depreciation because it is a non-cash expense, and since the objective is to find out free cash flows, non-cash expenses should be subtracted. After adding back depreciation to EBIT (1-T), capital expenditures should also be subtracted from EBIT (1-T) because it is a cash outflow. It has been estimated by the management that the capital expenditures required in the next five years will remain at $35 million per year. So, $35 million should be subtracted from the EBIT (1-T) values. The last step is the subtraction of changes in the networking capital from EBIT (1-T). For the year 2011, Operating working capital value can be calculated by subtracting cash and accounts payable from the current assets value. For the next five years, it has been assumed by the management that the operating working capital to sales ratio will remain at 20%. Therefore, using this ratio, operating working capital values can be found out for all the years to come by multiplying 20% with the sales value. The increase in the values of working capital over the years should be subtracted from EBIT (1-T) as shown in the spreadsheet, to come up with the free cash flows.

2. Use DCF to value the company based on your five-year forecasts plus terminal value.

In order to value the company by the DCF method, the terminal value of the FCF should be calculated by using the perpetual growth rate estimate. The next step is to discount the terminal FCF, and all other cash flows at the discount rate (cost of capital), to find their value in present value terms. It has been estimated by the management that, after five years, the sales of the company will increase forever at the rate of 3%. This corresponds to an increase in FCF at a rate of 3% for all the years to come after 2016. So, the following formula for the present value of perpetuity can be used to find out the present value FCFs generated by the company after years 2016, as of yearend 2016.

The free cash flow for year end 2016 is $46.16 million. So, by using this value and the growth rate of 3%, the terminal value of free cash flows as of year-end 2016 comes out to be $1635.99 million. The next step is to discount all the FCFs, including terminal cash flow using the cost of capital as the discount rate. After tax cost of capital has been calculated in the spreadsheet to be 20%. The discounted FCFs should then be added together to find the value of the company estimated by the DCF method. Spreadsheet calculations show that this value comes out to be $817.4 million.