The three different businesses that makeup Marriott Corporation—hotels and resorts, contract services, and dining—all run in their own unique ways. To assign a value to the proposed projects, the corporation employs three different hurdle rates for the three departments. Because of the vast differences in how the three departments function, it has been determined that this approach is preferable to adopting a single discount rate for the whole company. However, the corporation must be careful to use a reasonable discount rate for each department. Therefore, we determine the correct cost of capital for Marriott and its three segments individually. The correct inputs for each of the three categories are analyzed in depth, and the assumptions used throughout the computations are explained and defended. The opportunity cost of capital is calculated using the WACC of Marriott. In deciding whether to approve the project, this is helpful information to have. 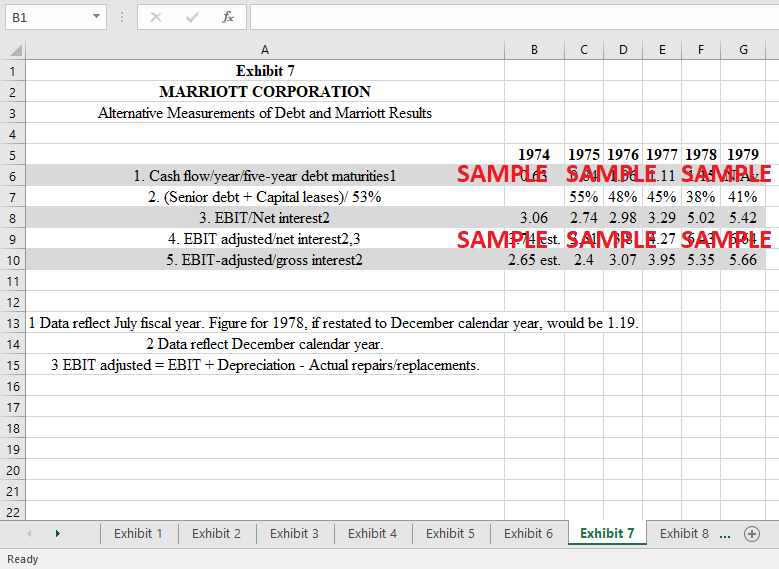 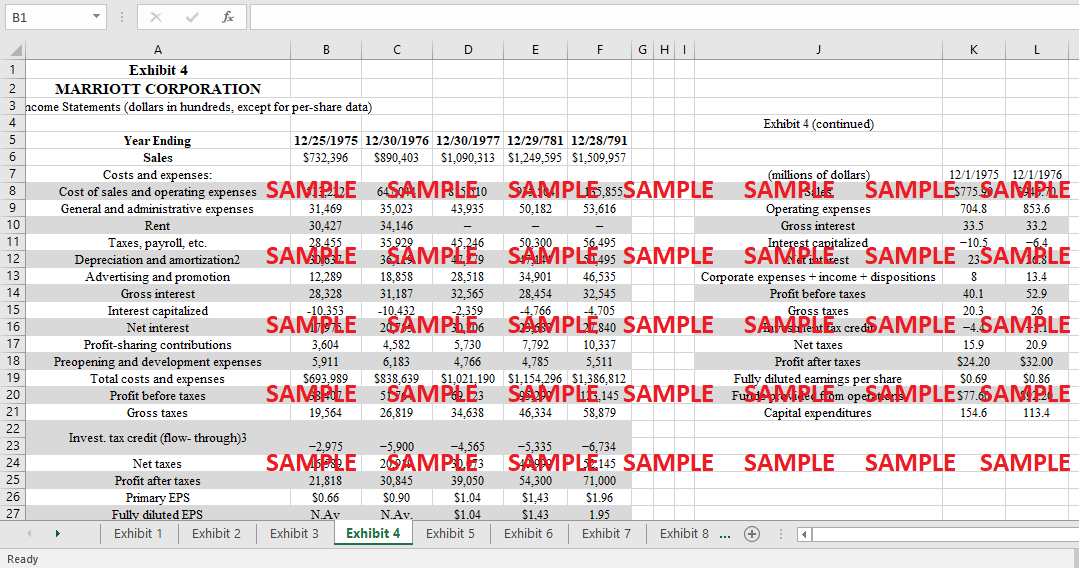 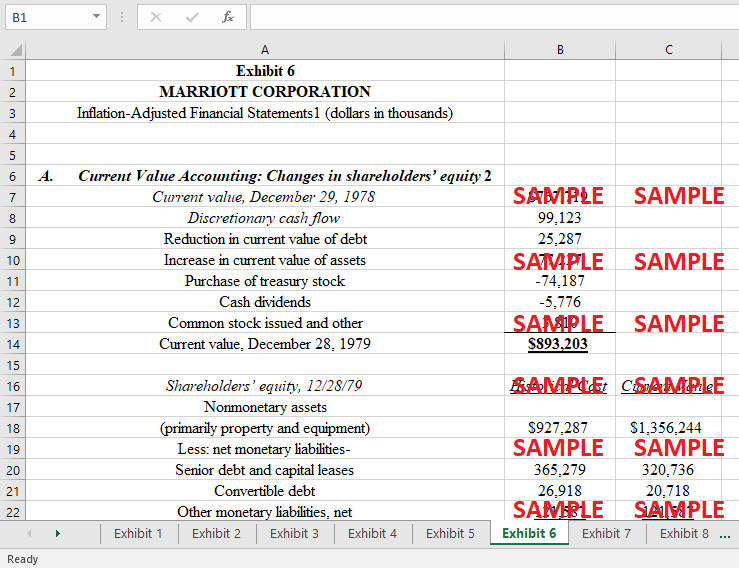 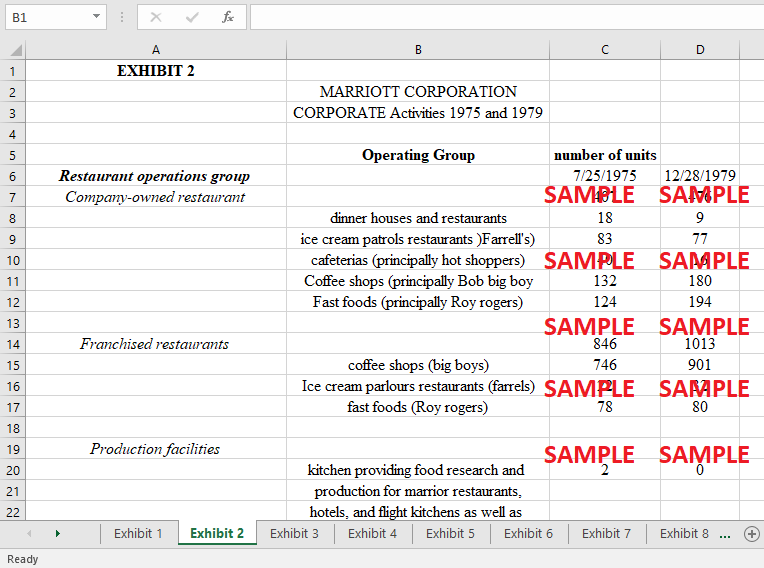 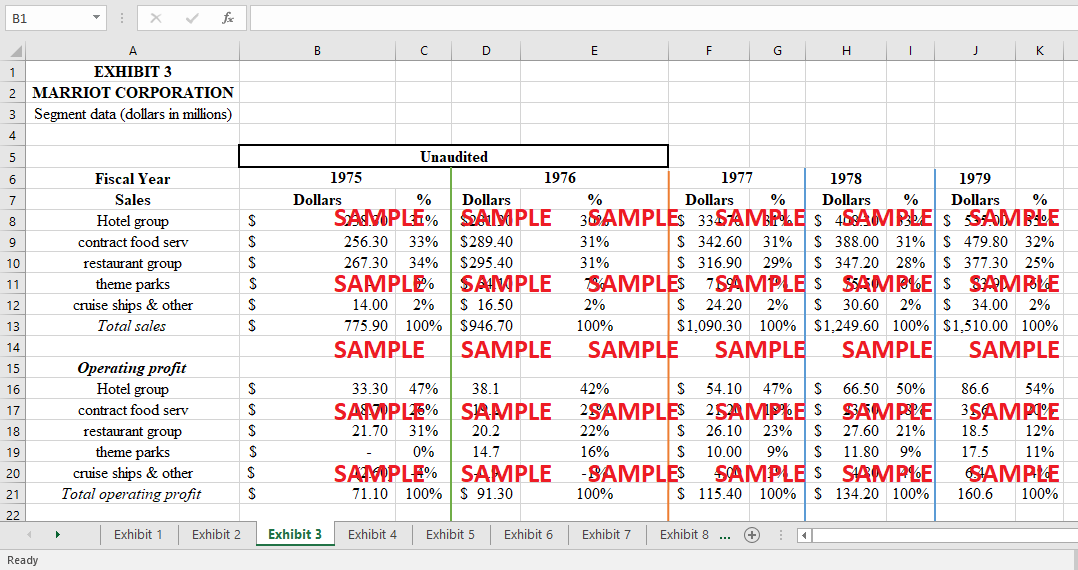 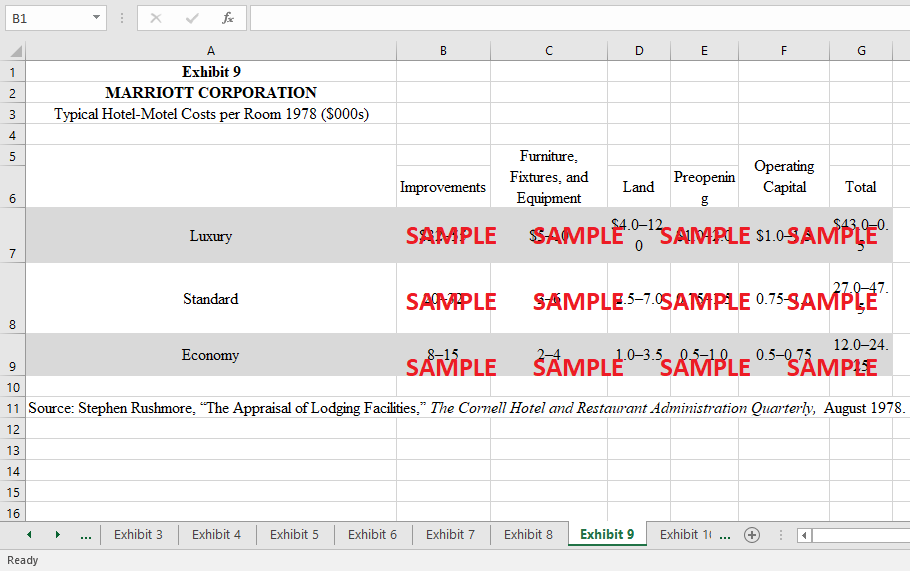 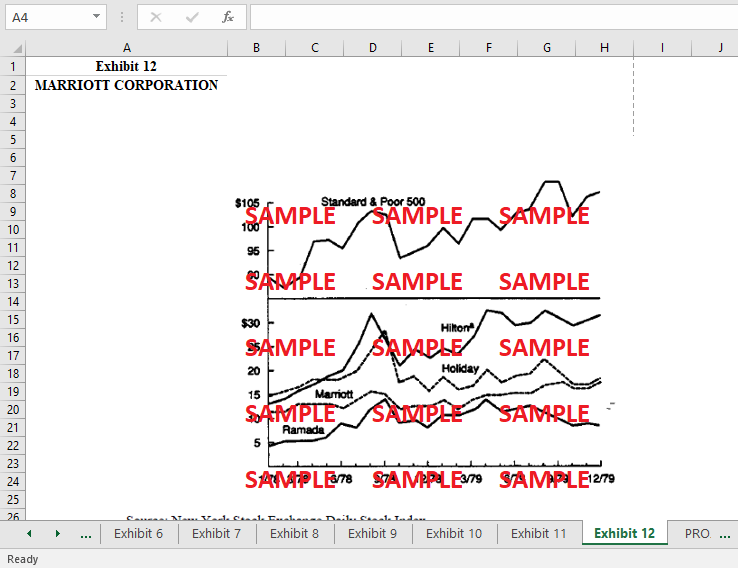 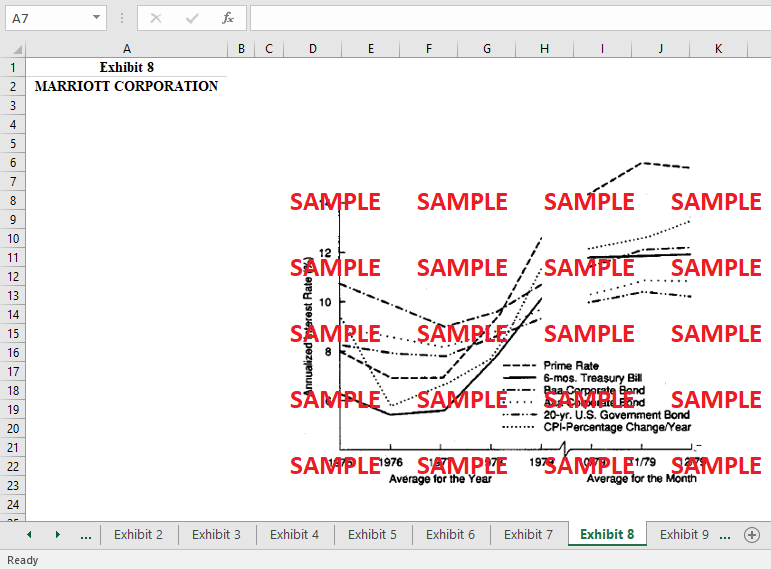 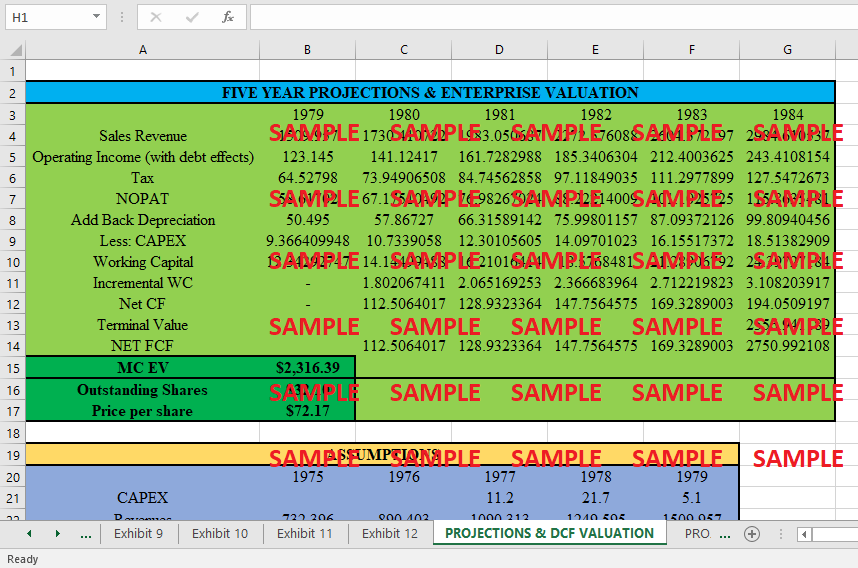 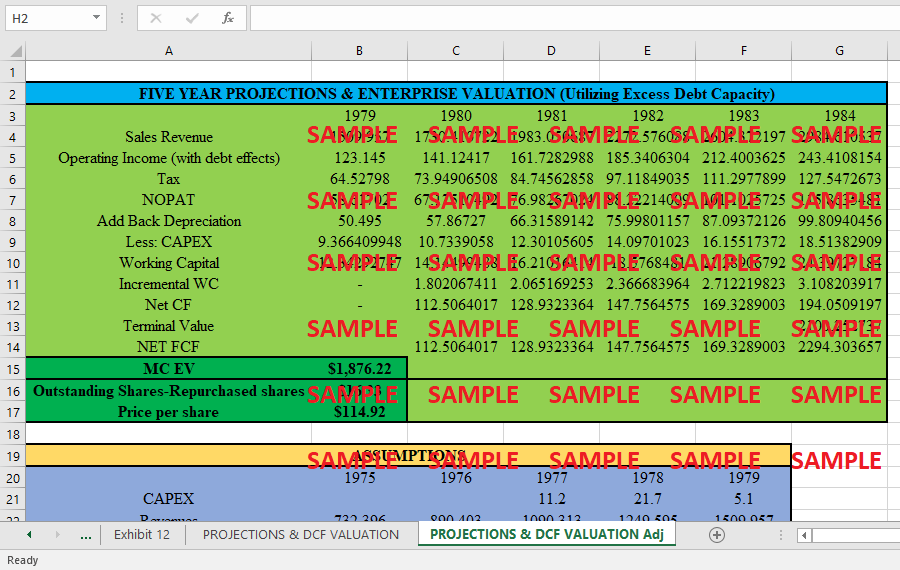 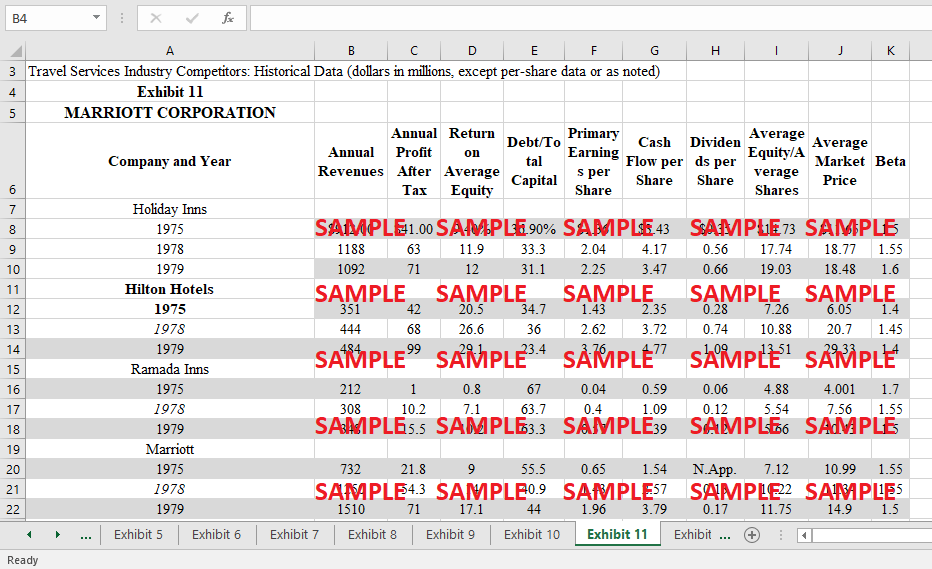 Case Analysis for Marriott Corporation The Cost of Capital

1. Are the four components of Marriott’s financial strategy consistent with its growth objective?

Consistent with its expansion goal, Marriott's finance plan consists of the following four pillars: Marriott's ability to manage rather than own means that it can attract more cash, allowing it to invest more in the future while spreading the risk among its limited partners. The formation of a partnership might result in significant tax benefits. You should put your money into initiatives that will raise the value of your company's stock. When the capital structure is optimized, the value to shareholders rises. By establishing a target coverage ratio, default risk may be effectively managed. When a corporation utilizes its excess cash to repurchase shares rather than investing it in growth-generating ventures, the result might be slower economic expansion. One part of the plan is to lease the hotel buildings rather than buy them outright by reducing the requirement for initial capital from the general partner. This goal helps bring new hotels to fruition more cheaply. While it's true that adopting such a strategy might reduce profit margins, expansion opportunities are undoubtedly attainable due to the reduced constraints on resources. The second goal is crucial in present-day corporate finance. It held that a company's primary purpose should be to increase its stockholders' wealth since this would ensure long-term success. Regarding the third purpose, Miller and Modigliani proposed that, in the presence of corporate taxes, the use of debt might raise the value of a corporation via the value contributed by the debt tax shield. Taking on debt is often seen to boost a company's worth in today's financial markets. However, due to the distress costs associated with excessive debt levels, a corporation should exercise caution when taking on too much debt. According to Marriott, a company should set its debt to get maximum benefit. It's possible that repurchasing shares at a discount might conflict with the company's desire to expand.

2. How does Marriott use its estimate of the cost of capital? Does this make sense?

By estimating its cost of capital, Marriott uses the discounted cash flow method to analyze potential investments. It seems to reason that the cost of capital for any given investment should be proportional to the level of risk associated with that venture. Therefore, if a business is considering 10 separate investments, it is possible that it may generate ten unique costs of capital estimates. However, it is unrealistic for businesses to calculate the cost of capital independently for each potential project. A corporation often engages in a single industry and has access to investment possibilities with a constant level of danger. Since this is the case, it is common practice for businesses to employ a single cost of capital for the whole enterprise. However, multi-divisional enterprises often calculate their cost of capital independently for each operating segment due to the inherent differences in their respective businesses. The Marriott Corporation is divided into three sections, each of which has its own unique hurdle rate. If the risk associated with investments within a given division does not change greatly from investment to investment and the hurdle rates appropriately compensate for that risk, this method is compatible with the theory. The opportunity cost of capital is calculated using the WACC of Marriott. In deciding whether to approve the project, this is helpful information to have. If the rate of return is higher than the weighted average cost of capital (WACC), the projects will be profitable. It's a good idea to use its estimate of the cost of capital. It's also encouraging since the three measurement inputs may differ between businesses, and thus the cost of capital may change as a result. Since most projects are exclusive to a single department, it makes more sense to consider the WACC of that department instead of the WACC of the whole company when deciding whether to approve a certain project.

3. What is the weighted average cost of capital for Marriott Corporation?