The higher growth rate for PNC could be explained by possible biased data provided to the analysts. The current price of Pacific, however, does not match the intrinsic value based on the given growth rate of 4.5% (see Excel calculations). The correct growth rate implied by the 20 dollar price is 0.77%. CAPM, which has been used to calculate the required return, is sensitive to the values of beta and market premium. Accuracy of such inputs directly affects the pricing of Pacific Corporation’s stock. Similarly, the Gordon model (used to value the stock) is sensitive to the forecasted growth rates of the company. 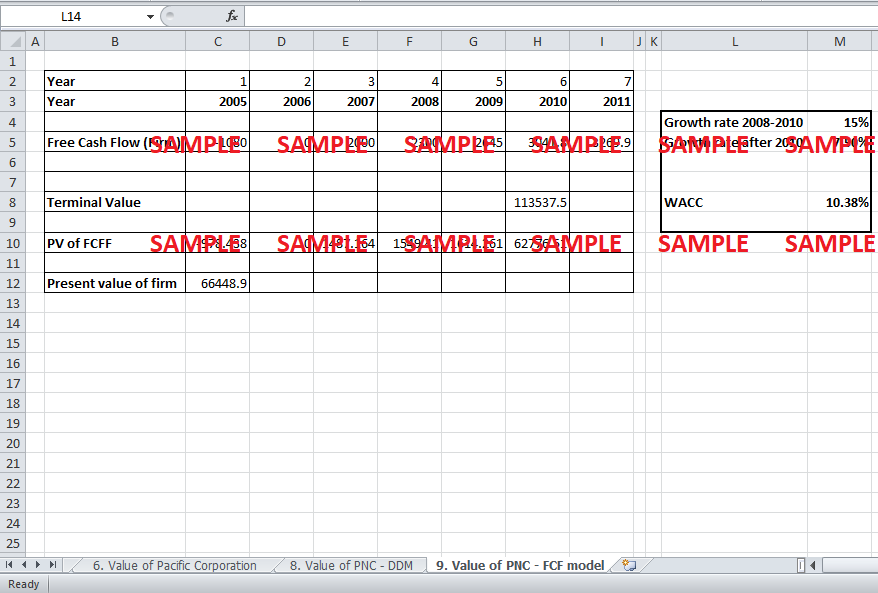 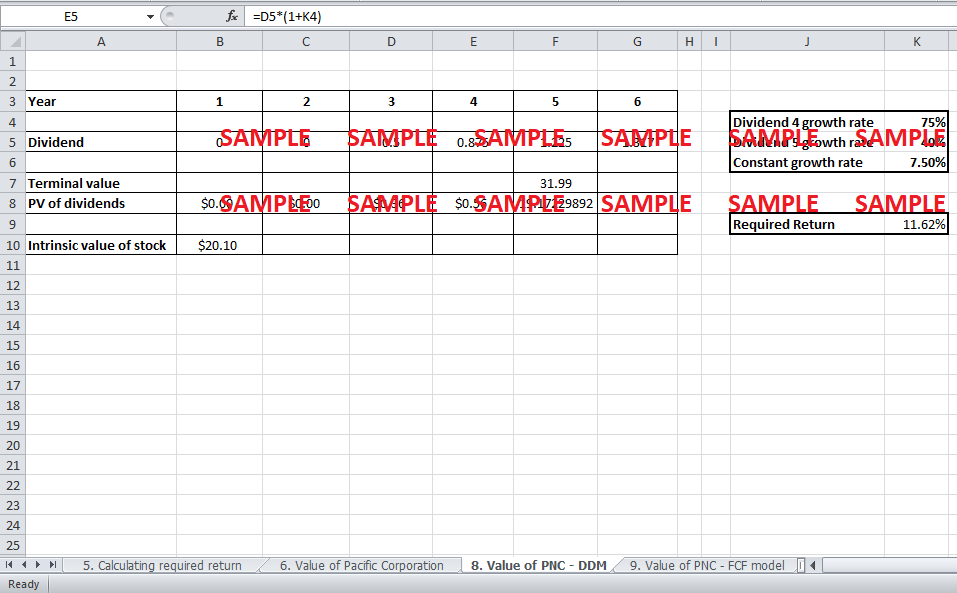 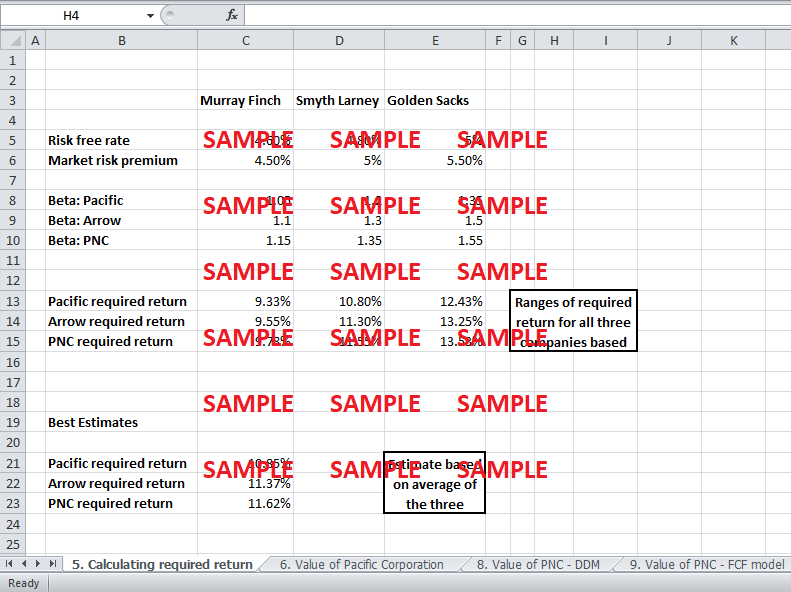 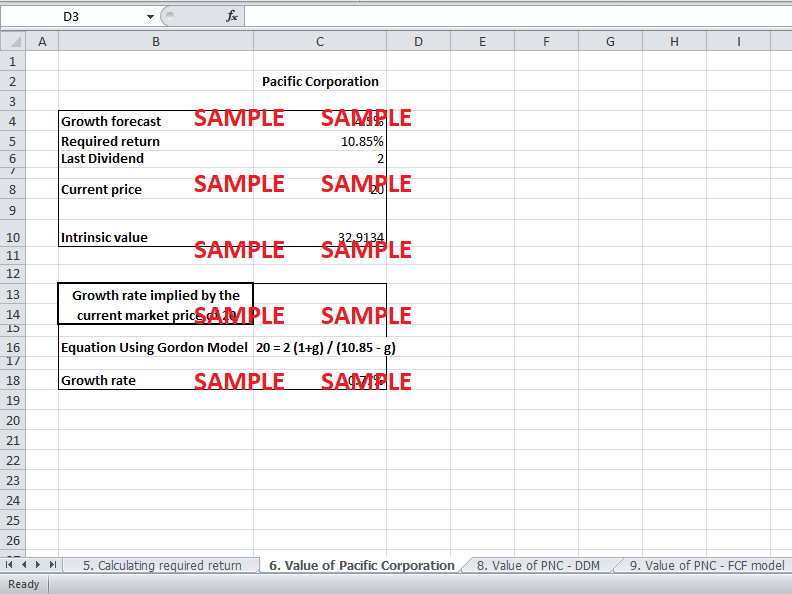 1. Who has the power to control a firm- its stockholders, board of directors, or executives? Is there is a difference between control in theory and control in practices? What changes have occurred in the control situation in recent years? Most stockholders own only a very small stake in large, publicity traded companies, say 500 shares outstanding. For such stockholders, does it really matter who controls the firm? Would PNC’s inside stockholders be concerned about control issues? Would stock transactions by PNC’s insiders have an influence on the price of the stock, and what, if anything, should the company do about any such influence?

Theoretically, and often in practice, shareholders of a firm enjoy the most influence and power within a company. This is particularly the case when there is a single majority owner or when a small firm has a few investors/owners. The shareholders elect the members of the board of directors usually through a voting process. These directors in turn are responsible for overseeing and nominating the management or the executive of the company. Shareholders of a firm can transfer their voting rights to a third party (usually the management or an influential shareholder) by using a ‘proxy statement’. Such transfer of voting right however sometimes leads to a ‘proxy fight’ where an outside group acquires these rights to ouster the current management of the company. Thus, PNC’s management may exercise significant voting rights and hence control of the firm if they hold sufficient shares of the company with themselves.

2. PNC has only “regular” common stock outstanding. Can you think of any circumstances under which it might want to use some other types of stock?

PNC is considering acquiring another firm by issuing shares. Since owners of the target firm are reluctant in taking common stock, using preferred stock is likely to solve much of the issues that are raised by target company’s stockholders. Firstly, preferred stock holders would not face the same level of risk as common stock owners since preference shareholders enjoy a superior claim on the resources of the company in case of liquidation or bankruptcy. Secondly, preference shareholders also enjoy the right to a fixed amount of dividend which is not at the discretion of the management. On the flip side, preference shareholders would have to give up voting rights to reap these benefits.

3. How does the U.S. market as a whole compare with other world markets in terms of size, liquidity, risk, and historical returns? How do changes in currency exchange rates affect earned returned in different markets? Would you recommend that PNC’s employees allocate some of their retirement funds to overseas in investments? Should one of PNC’s employees based in the U.S. make the same allocation as a Brazilian employee based in Brazil?

The US market in comparison to many of the other markets in the world is larger in size, with higher trading volumes and more listed companies. Similarly, the equity markets also benefit from higher liquidity, lower risk, and stable returns. This is due to increased regulation and superior compliance processes adopted in US. Also, the traditionally low fixed income returns on the US Treasury securities also push much of the investment in the equity sector.

For a foreign investor, who has invested in the US markets, strengthening of the dollar against his local currency would lead to exchange rate gains. This is intuitive since his investments would now be converted to more of his local currency after dollar appreciation. Employees of PNC should invest in overseas markets based their technical and fundamental analysis of the stocks and the market as a whole. Investing in overseas markets would not only bring the possibility of possible exchange rate gains but would also lead to diversification.

4. PNC’s stock is traded in the over-the-counter market, but some directors have suggested that it should be listed on the NYSE or the Nasdaq. Could PNC list its stock at this time? What are the pros and cons of listing versus trading in the over-the-counter market? If PNC could list anywhere it chose, would there be an advantage to going on the NYSE versus the Nasdaq? Since PNC does business all around the world, should it consider listing its stock on one more foreign exchanges?

For PNC, listing its stock on the exchange would bring both benefits and drawbacks for the company. Listing on an exchange would provide greater excess to capital for growth. The company would also be in a position to strengthen its image and generate publicity for itself. This has the potential to be translated into greater market share. Listing the stock on an exchange could also be disadvantageous. PNC would need to comply with increased disclosure and other regulations. The cost of such compliance can be very high.

PNC would also find it difficult to comply with some of the minimum requirements of both NASDAQ and NYSE. The firm could face issues in meeting the criteria of adequate cash flow and minimum earnings. However, listing on NASDAQ should prove to be relatively easier for PNC as there is no cash flow requirement and the condition of minimum share value and earnings is also lower. Listing the stock on foreign exchange would hedge the share prices of PNC against any bubbles in the economy or the stock market.

5. What are reasonable ranges of estimates, and the single best estimate, of the required return (rs) for Pacific, Arrow, and PNC?

6. Pacific Corporation’s internal forecasts indicate that it will grow at the constant rate shown in Table4. Based on this information, does it appear that Pacific’s stock is in a long-run equilibrium, with the actual price equal price equal to the intrinsic value? What growth rate does the $20 price imply that the marginal investor expects, assuming the beta and market risk premium reflect investors views? How sensitive would the price be changes in beta, the market risk premium, or g? What would you recommend that Ray Reed and the other PNC officers and directors do-buy more of Pacific’s stock, sell what they have, or stand pat?