Richard Johnson worked at the packaging and assembly department at National Auto Accessories Ltd, a large Canadian automotive accessory distribution company. He and his brother, Ken planned to invest in a firm Protect-a-plate, which manufactured a licensed plate protector for car plates. Due to the five-year licensed plate policy, both believed that there was a market for this product. They each planned to invest $18,000 and take a bank loan of $30,000. They drew the attention of the sales manager at National about the product. They faced competition from an American company who quoted a price of $1.63. Hence, they aimed to offer a 10 to 15 percent lower price to National. There is presented the analysis of the profitability of the venture. 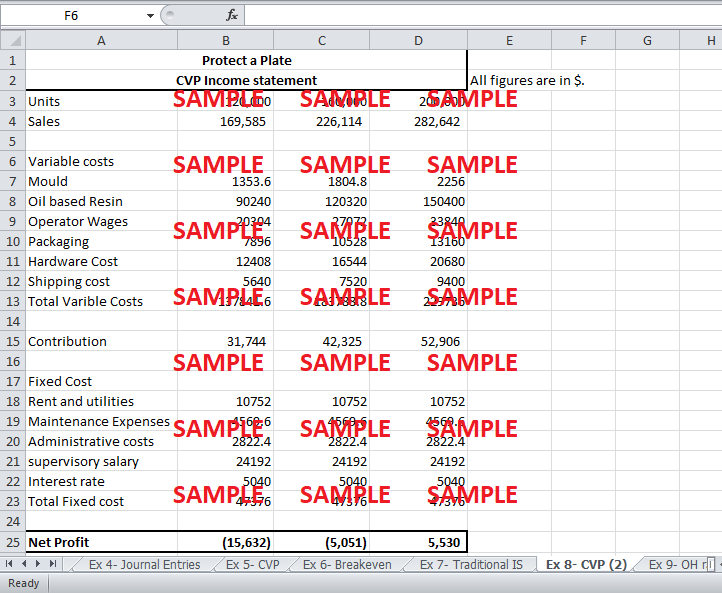 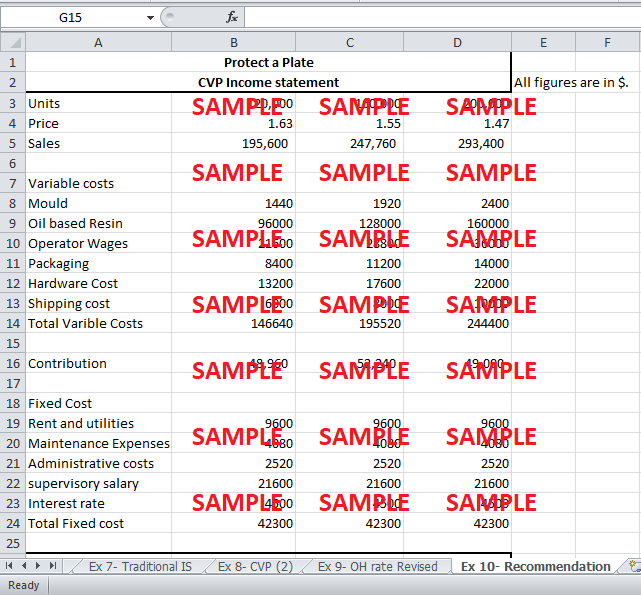 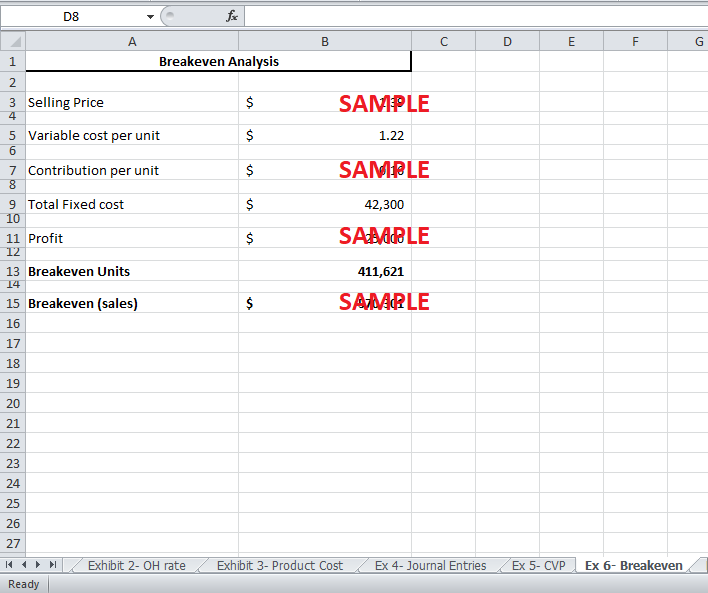 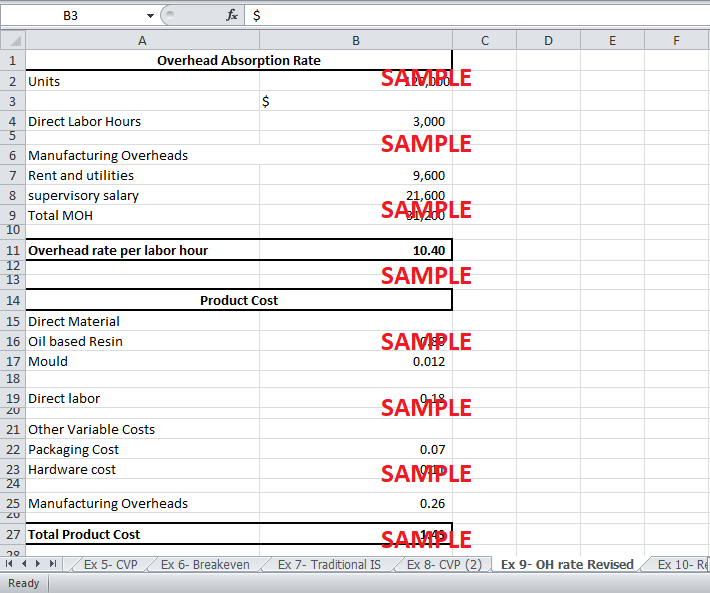 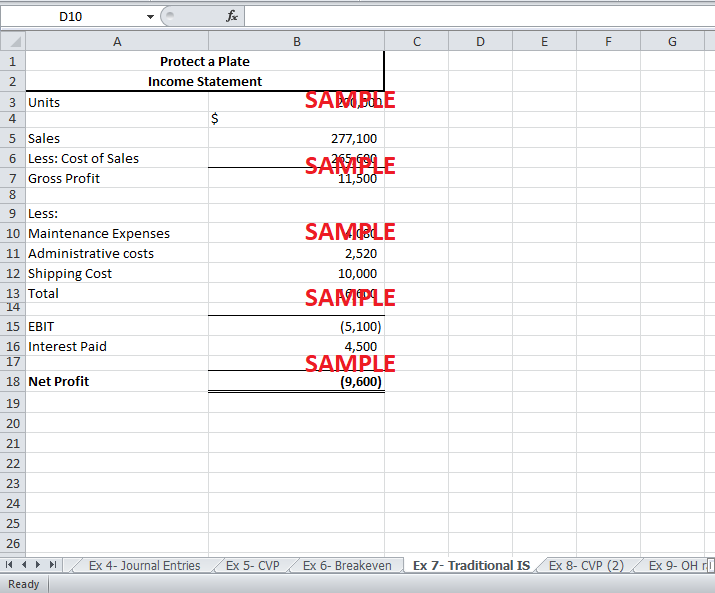 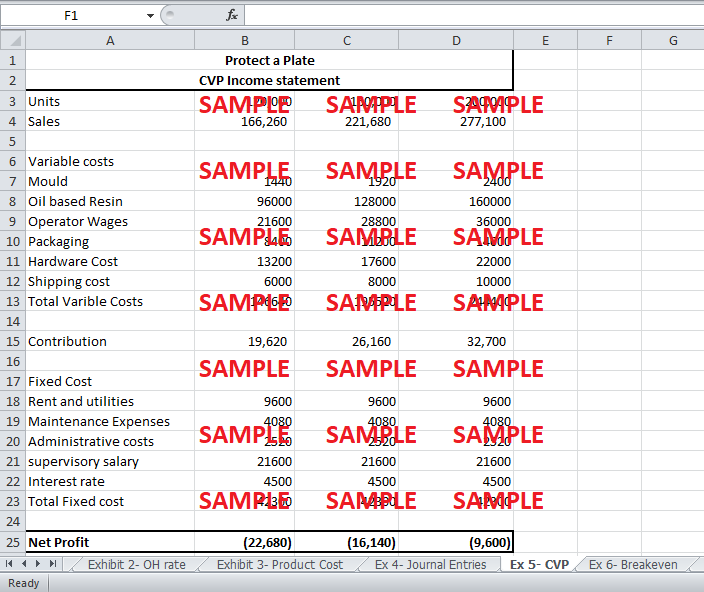 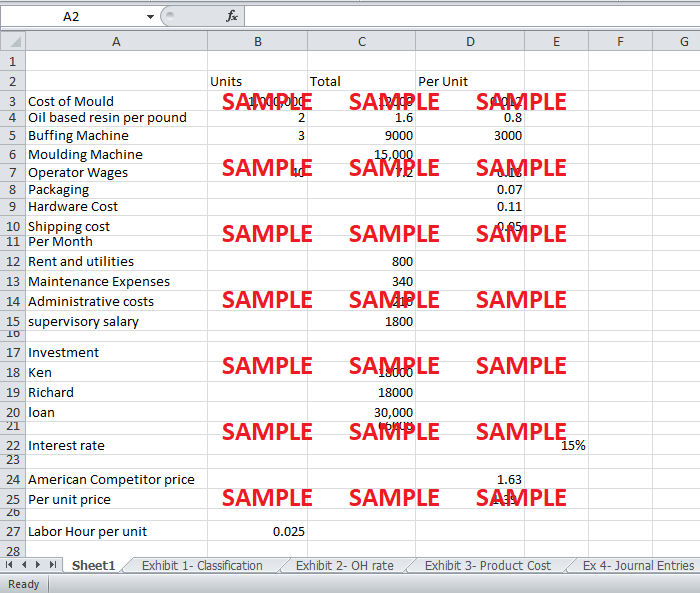 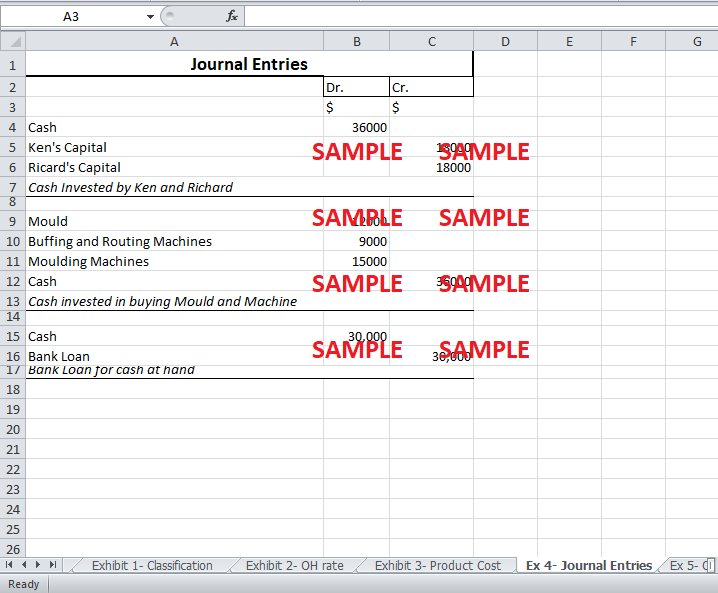 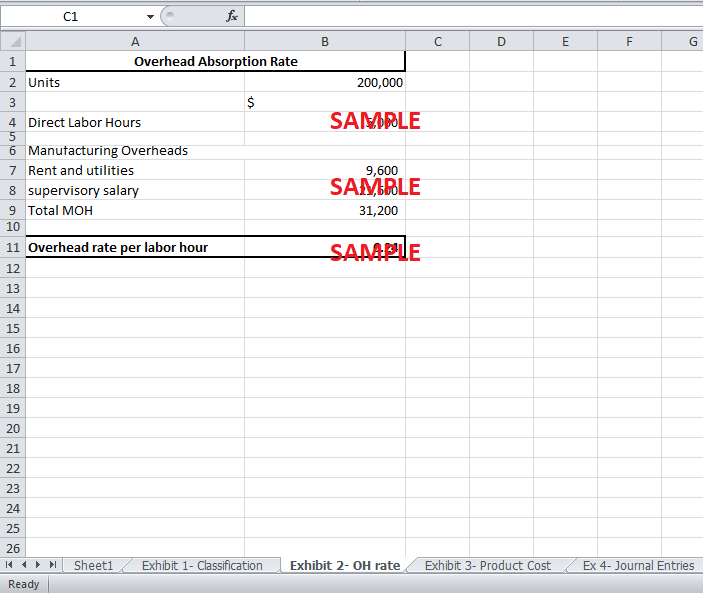 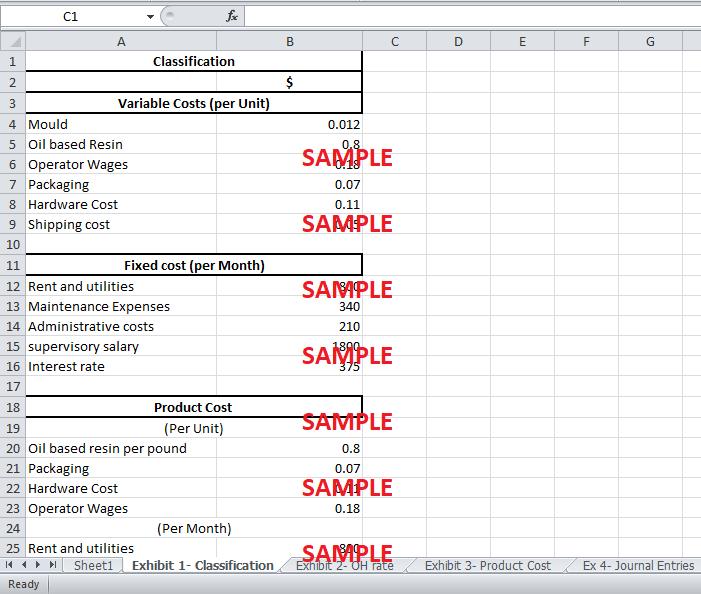 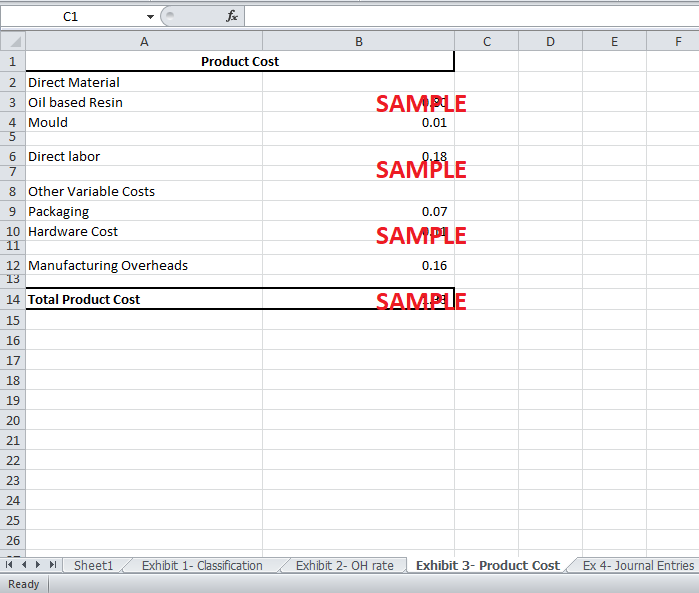 1. Classify costs as either product costs (DM, DL, MOH) or period costs; variable or fixed costs and Opportunity costs and Sunk costs. You need to identify at least two opportunities and sunk costs for this situation. A spreadsheet with dollar amounts (yearly $ for MOH, period costs, fixed costs and per unit for DM, DL and variable costs) Using DL hours as the activity base, calculate the OH rate. (Hint:  MOH should be calculated for the year) Assume that you will sell 200,000 units for the year.

Exhibit 1 shows the classification of costs. It is assumed that mold produces one million units. Hence, if 200,000 units are produced each year, the mold would last for five years. Mould is treated like a fixed asset and depreciated based on the unit produced. Hence, mold depreciation would be a variable cost. Other variable costs include packaging, hardware cost, and shipping cost. Operators’ wages are treated as direct labor expenses. Hence, the Operators’ wages are also variable costs. Additionally, the oil-based resin cost is also included in the variable cost as they vary with the number of units produced.

Fixed cost is the monthly expenses that do not relate to units produced. Rent and Utilities, Maintenance Expenses, administrative cost and supervisor salary are fixed cost. The 15% interest on a $30,000 bank loan adds the monthly interest expense of $375.

From the variable costs, the product cost includes the mold depreciation cost, the oil-based resin cost, the packaging cost, and the hardware cost. The shipping cost will be a period cost. From the fixed cost, rent and utilities cost, and the supervisor salaries are assumed to be indirectly related to the product. Thus, these are product costs. All other fixed costs are period costs.

The opportunity cost for the ventures is the 15% interest receipt on investments by Ken and Richard. Therefore, by investing in Protect-a-plate, they each lose annual interest on savings of $2700. Furthermore, as Richard will resign from his job to supervise the salary, Richard’s forgone salary will also be an opportunity cost.

The mold of $12000, buffing machines of $9,000 and the molding machine of $15,000 would be bought when the operations start. This investment will be irrecoverable. Hence, this will be classified as the sunk cost.

2. Determine the cost of producing one protector for National.

Exhibit 3 shows the product cost of the protector for National. It is assumed that there is no depreciation of equipment in the first year. The material cost of mold and oil-based resin is added to the Operators' wages and other variables cost like hardware and packaging cost. The manufacturing overhead per unit is calculated by multiplying the overhead rate with the labor hours per unit. Hence, the product cost is $1.33.

3. Record any three journal entries for this company.

Exhibit 4 show three main journal entries, required at the start of the business.

Exhibit 5 shows the CVP income statement for 120,000, 160,000 and 200,000 units. The calculations show that for each level of production, the firm will be making a loss. However, the loss decreases as the quantity produced increases. The lowest loss is $9,600 for 200,000 units. This is because as units produced increase, the contribution rises but fixed cost remains constant. This causes the loss to decrease.

The CVP income statement is important for new ventures because it helps in decision making. By using different volumes to calculate costs and profits, the manager can determine the optimal volume for production.

6. Prepare a traditional Income Statement for the 200,000 unit volume.

7. If the following changes were to be made, calculate a new CVP Income Statement: variable costs decrease by 6%; fixed costs increase by 12% and sales price would increase by 2%. Assume you are selling 160,000 units. Should the company consider these changes? Give some examples of cost increases or decreases that could implement these changes for the business.

A few changes are made to the revenue and expenses of the CVP statement in Exhibit 5. The sales revenue is increased by 2%. The variable cost is decreased by 6%, and the fixed costs are increased by 12%.