RightNow Technologies was set up in 1997 by Gianforte and specialized in producing software focused on CRM. Within a few years, the company as able to record remarkable growth in terms of business reach and employees, and its revenue rose exponentially. Due to the company's success, Gianforte received an attractive offer from a large company. Now there were three viable options for the company, which concerned with accepting the offer, plan an IPO, or reject the offer and further grow the company. The following report will evaluate the progress of the company. The market value of equity for the company will be evaluated for better analysis.

Furthermore, the lowest selling price would be considered when considering the selling offer. On the basis of these, recommendations will be given to Gianforte. Also, the strategic approach of Right Now will be compared with traditional CRM companies, and the bootstrapping technique for business growth will also be analyzed. 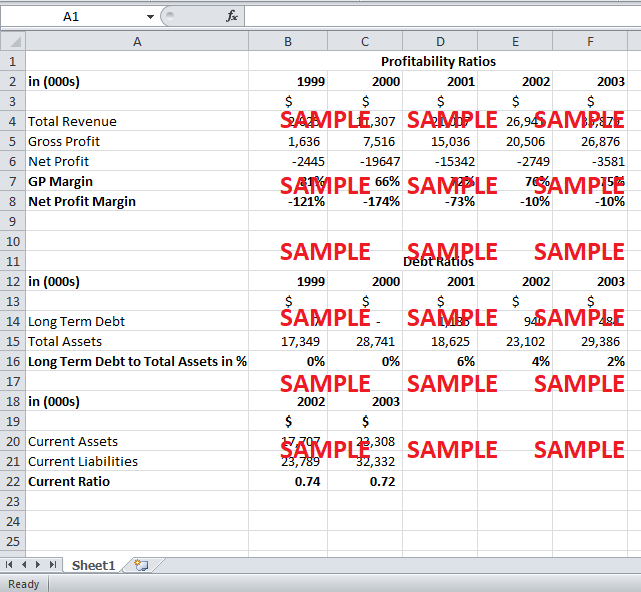 2. The progress of the company and the current business situation

It is quite evident that comparing 2003 with the past years, the company’s net loss position has improved substantially as it fell at -10% from a high level of -73% in 2001. The Gross profit margin also stayed at a reasonable level, declining slightly from the past year.

Furthermore, the long term debt to equity ratio for the company declined to 2% in 2003 from 4% in 2002. The overall leverage of the company is low, which is good from the perspective of the investors.

Moreover, evaluating one of the liquidity ratio, which is the current ratio, it is observed that the liquidity position of the business is not very good as its current liabilities are higher than the current assets. Lack of cash or liquid assets can, therefore, place the business in a difficult situation as its creditors can force it into bankruptcy if it fails to make timely payments.

3. Estimation of the Market Value of Equity based on the Multiples

As per Exhibit 3, which shows the transaction multiples, the average of the trailing Market Value/Revenue Multiple for all the companies for the year 2003 is coming to be 4.5x. This multiple is then multiplied with the software revenue of the company earned in 2003, which is equivalent to $29,300. Multiplying both the numbers, we get a value of approximately equal to $131.85 million. The average of the forward Market Value/Revenue multiple is equivalent to 4x. Multiplying this with the given revenue, we get the Market Value of Equity to be equal to $117.2 million.

The transaction multiple that has been considered for the calculation is the Adjusted Price/Revenue, given in Exhibit 4. As per the data given, the adjusted multiple is coming to be 2.44. Multiplying this with the 2003 revenue of the company of $29,300, we get a value of $71.49 million.

From the perspective of Gianforte, he believes the company to have higher growth prospects and be even more worthy. Hence, while forward market value to sales revenue multiple gives an overall valuation of $117.2 million, the forward Enterprise Value to Sales revenue multiple gives the business value of $90.83 million. Therefore, the lowest value Gianforte would be willing to accept would be $90.83 million.