Sears Holding Corporation is the parent company of "Kmart" and "Sears". The company is an integrated retailer with significant physical and intangible assets and operates nationwide with a network of 1,672 full-time and specialty retail stores (Sears Brands, LLC, 2016). Sears holding corporation (symbol: SHLD) is listed on the NASDAQ index. It belongs to the services industry and within services industry to the department store segment. The market price of its stock is currently $11.22, at its 52-week low. As per annual report 2015, a number of shares outstanding are 106.6 million. Market capitalization amounts to 1.19 Billion. Average weekly return of Sears is -0.1% which when annualized equals -5%. The standard deviation of returns is 8% (Sears Holding Corporation, 2015). 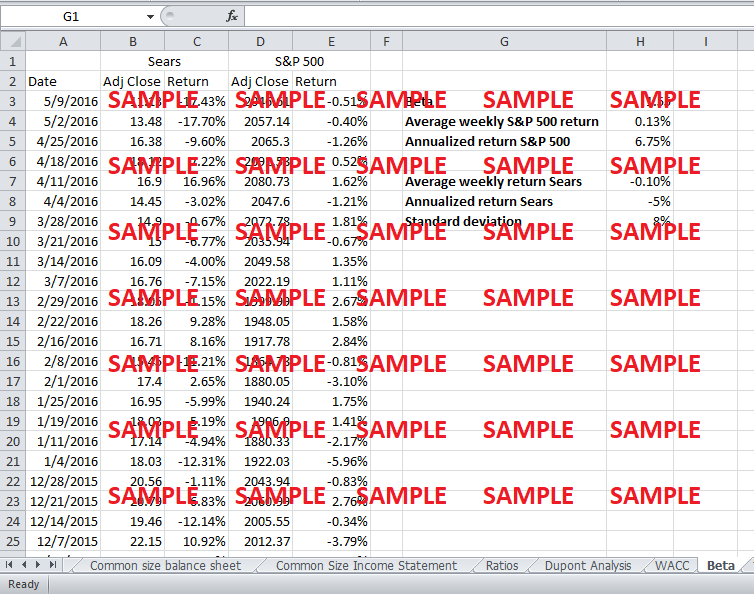 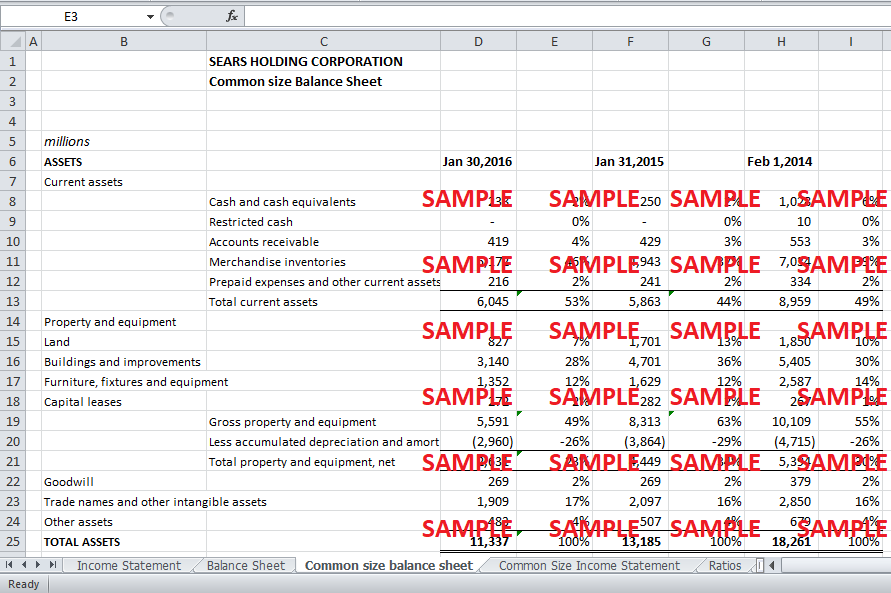 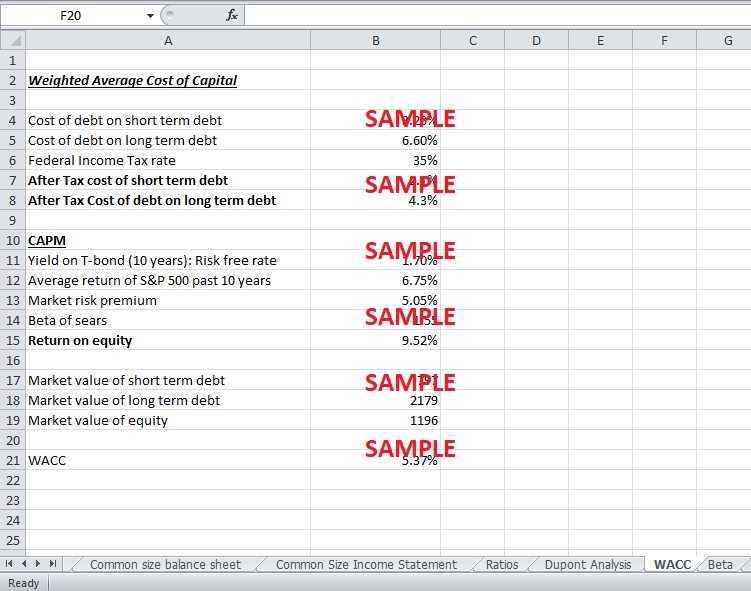 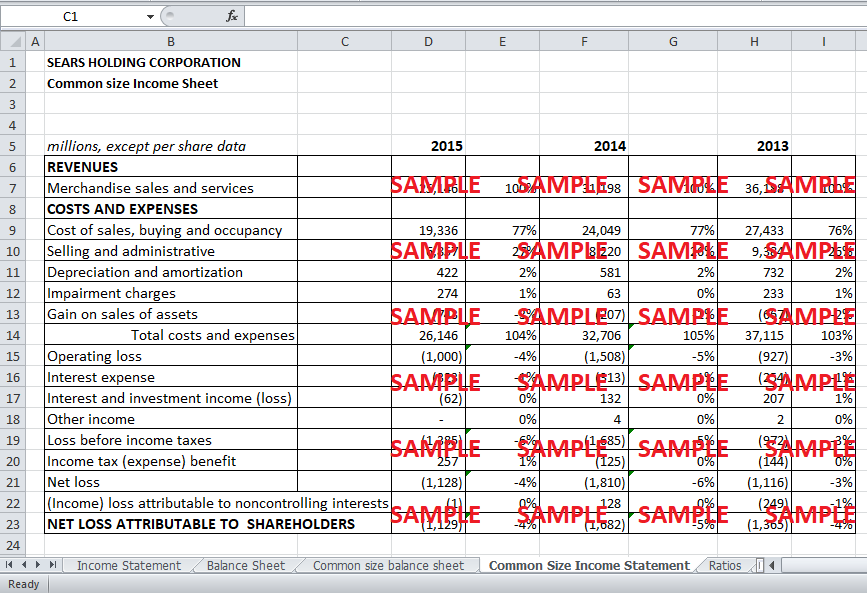 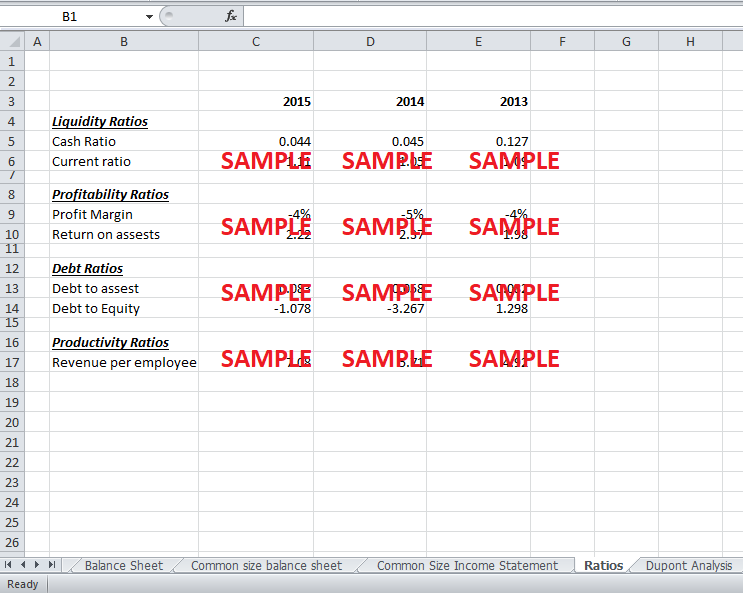 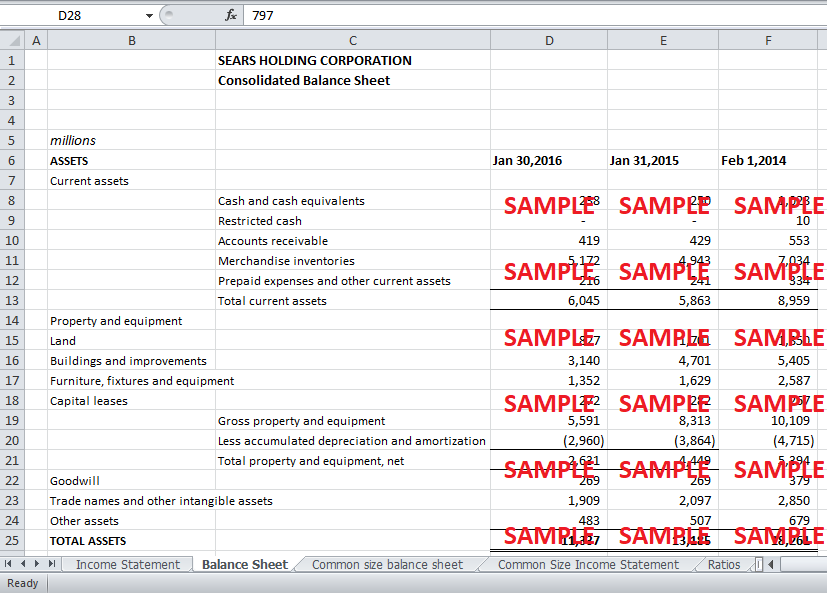 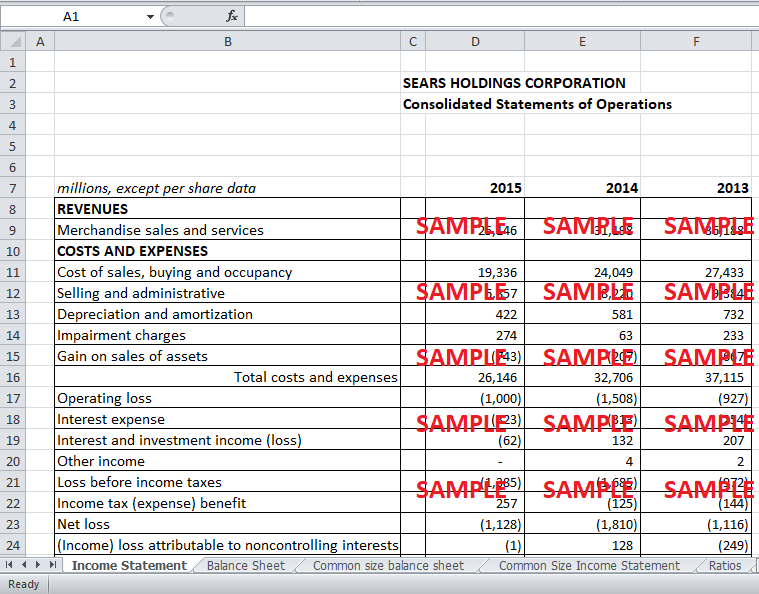 Financial ratios of sears are difficult to interpret because operating income, net income and shareholder’s equity are negative. Liquidity ratios of the company are satisfactory and suggest that company will be able to fulfill its short term obligations. Profitability is a major issue as the company’s net profit margin of -4% is far below the department store segment average of 1.7%. Debt to equity ratio is negative for the company where as the segment average is 69.82. Revenue per employee, a productivity ratio which divides total revenue by a number of employees, shows significant improvement. It has increased from 4.92 in 2013 to 7.08 in 2015 (Sears Holding Corporation, 2015). As per Dupont analysis, the only positive is that company has been able to increase its asset use efficiency which is shown by the increase in asset turnover ratio. Overall, Ratio analysis reinforces the sentiment that the company is in a financially distressed state (Sears Holding Corporation, 2015).

Some trends are visible in the common size balance sheet. Long term debt shows a decrease from 2014. This has been achieved by entering into a sales-leaseback financial transaction with "Seritage’, an independently publicly traded real estate investment fund (REIT) (Sears Holding Corporation, 2014). Also, cash has been used to pay off some short term debt due to which cash also depicts a declining trend. Retained deficit is on the rise (29% of total assets in 2015). This is a source of major concern because negative retained earnings mean a company has no profits to reinvest and will have to seek other modes of financing to remain in the business (Sears Holding Corporation, 2015). Banks are reluctant to provide financing to such companies and hence, it overall impacts the going concern assumption (Brigham & Ehrhardt, 2013).

Risk free rate has been assumed equal to yield on T-bonds (10 years) that is 1.7%. Beta is calculated by regressing 10-years weekly returns of Sears (y-axis) on 10-years weekly return of S&P 500 returns (x-axis). The beta of Sears is 1.55. Market risk premium, the difference between markets return and risk free rate, amounts to 5.05%. The market value of debt has been assumed to equal the book value of debt. The market value of equity is calculated by multiplying current stock price ($11.22) with some shares outstanding (106.6 Million). Weighted average cost of capital comes out to be 5.37%. Please refer to excel sheet for all the calculations (Sears Holding Corporation, 2015).

Sears is currently in a distressed condition. Revenue is decreasing with each passing year whereas operating losses are increasing each year positively contributing to the retained deficit. This also adversely impacts shareholders’ equity. Sears has a negative shareholder equity which effectively means that the company is bankrupt because it does not have sufficient assets to pay off its liabilities.