Seitel, Inc. provides seismic data to oil and gas exploration companies. The company also has its own operations in crude oil and natural gas exploration and production. The company accounts for its seismic data bank as an investment asset and records its amortization over periods ranging from 10-20 years using the income-forecast method. However, the company’s competitors use considerably shorter amortization periods and some of them even account the data bank as inventory. The report poses to think of various inventory accounting techniques that the company can use within the scope of the industry. Studying the business and the industry, it is concluded that the data bank should be recorded as an asset; however, the amortization periods can be regulated to a shorter length. 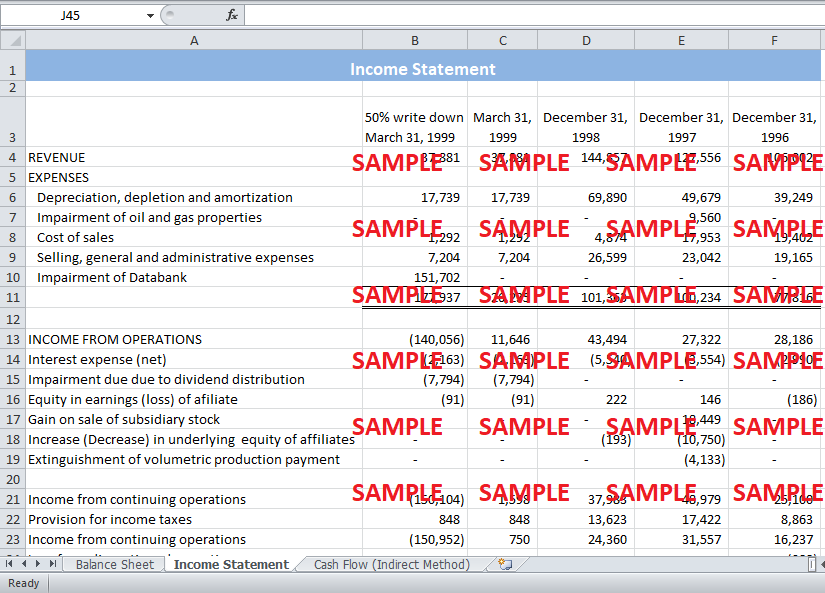 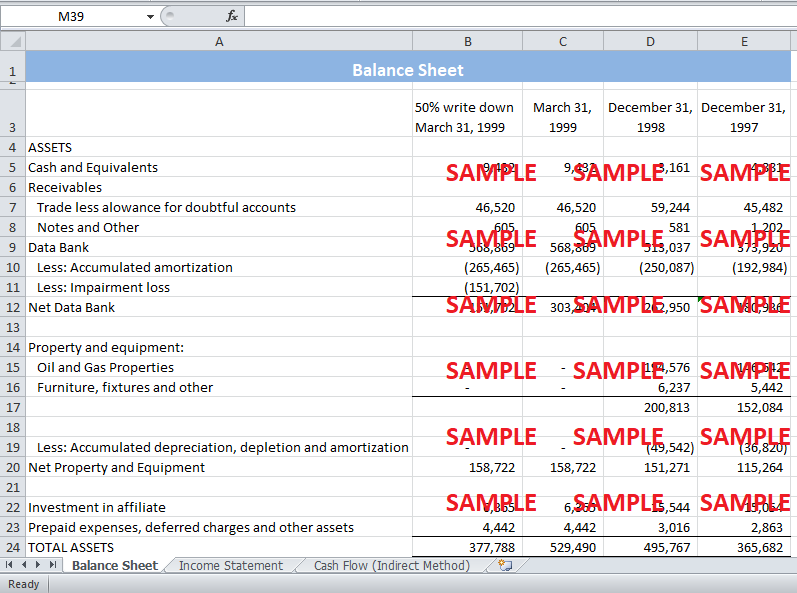 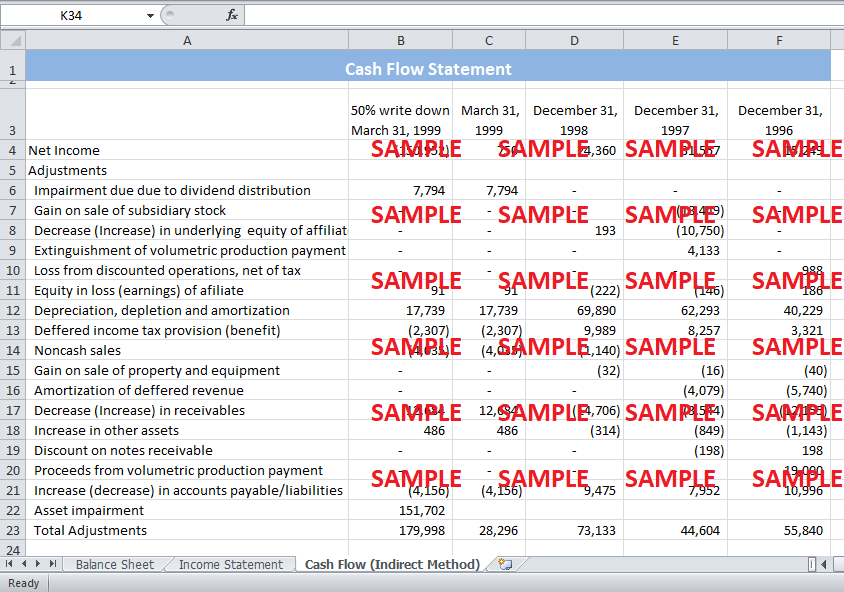 1. Assume the company decided to take a 50% write down this year on its seismic inventory. Restate the Income Statement, Balance Sheet and Statement of Cash Flows.

The impact of write down of 50% of seismic data bank has a very negative impact on the company’s overall financial statements and financial condition. The net data bank of the company at the end of the 1st quarter 1999 was worth $303,404. However, if the data bank is written down by 50%, the company is left with $151,702 worth of the asset. Correspondingly, asset impairment is recorded in the income statement at the same amount under the expenses head. This expense affects the final figure of the net income very adversely taking it from a positive $750 for the quarter to a negative $150,104. However, the company does not have to worry very seriously about this as this is just a one-time expense pertaining to one period only. The company can recover slowly in the subsequent periods and may report profits. Moreover, the nature of this expense is also non-cash which mean that the company has not incurred any cash expenditure in this expense, and there is no effect on the cash reserves/ liquidity of the company. This can be seen in the cash flow statement of the company which reports no ultimate change in the net cash provided by operating activities.

2. You are the new CEO of Seitel. What, if anything, should you change about Seitel’s amortization policy?

The interesting thing to note is that, compared to its competitors, Seitel employed a long amortization period, around 10-20 years compared to competitor’s 4 years.

Before pitching any change in Seitel’s amortization policy, Seitel’s current policy should be weighed against the alternatives available.

Income-Forecast Method vs. Other Amortization Methods

Under the income forecast method, seismic data costs are amortized in line with management’s expectation of future revenues from the data. For intangible assets, such as the seismic data bank in this case, this method of amortization is more in line with the GAAP’s requirement of a “systematic and rational” amortization method as compared to any other amortization methods; Straight Line, Double Declining Method, Modified Accelerated Cost Recovery System (MACRS) and Years Digits Method. The income-forecast method depicts the best possible picture of the costs incurrence as it relates them to the actual amount of revenue generated from them in corresponding periods. Moreover, the competitors are also using the same method. Hence, there is no argument on going for any other method than the income-forecast method and the question now remains of the size of the period to use.

In a long amortization period, assets are kept on the balance sheet for a longer time periods. This spreads out the costs over a longer interval, and there are lesser expenses reported in a specific period, consequently increasing net income in all periods. However, the downside of this is that, in the long term, the company tends to accumulate more and more assets over its balance sheet and in case of any unfavorable circumstance that reduces the estimated future revenues e.g., change in technology; the assets have to be written down all at once, resulting in negative financial statement figures for that period. As mentioned in the case that historic trends indicate that the seismic data is more useful in the initial two years, and there are regular changes in the technology, having long amortization periods can be a potential risk. In short amortization periods, assets are written off the balance sheet sooner, and the risk of having a huge write off at once is mitigated.

Based on the above reasoning, three changes are suggested in Seitel’s amortization policy:

3. If Ms. Lee treats Seitel’s seismic library as inventory, how will it impact the financial statements, financial ratios and Intrinsic Firm value?

The Seismic library has been treated as an investment asset because of two main reasons:

Because of these reasons, Seitel’s data library cannot be recognized as pure inventory. If Ms. Lee treats Seitel’s seismic library as inventory, the financial statements will show huge costs in the early periods when the seismic data is first made available for use to the licensees. The costs will not be spread out evenly over the periods. This will show significant losses in some periods while showing high revenues in others. The effect on financial Statements; balance sheet, Income Statement and cash flow statements, financial ratios and Intrinsic Firm value will be as follows:

The income statement will report huge costs at the time of making data available for the licensees under the cost of goods sold because the entire cost of the data will be recorded at the time of the sale. These costs were earlier being recorded in the depreciation, amortization and depletion heads.

Cash Flow Statement will have no change when either of the approaches is followed because these are non cash expenses.

The company’s key financial ratios will be heavily disturbed in different periods, showing lack of trend and any consistency. This is primarily because of the immediate realization of the entire costs related to the sale at the time of sale. However, It is interesting to note that while the measures of profitability will show extreme results e.g., net profit margin showing losses in earlier periods, the measures of liquidity e.g., Current ratio, Quick Ratio and Net working capital will remain essentially the same as the amount of assets is not disturbed.

Effect on the Firm’s Intrinsic Value

In the long term, the firm’s intrinsic value will have no effect as only method of recording the same amount of costs is being changed under the two treatment methods, the asset-like and the inventory-like treatment. However, in the short run, when greater costs will derive the profits in negative, firm’s value is likely to suffer in specific periods and will affect the shareholders value, as well.