The Acquisition of Consolidated Rail Corp. (B) Case Solution

Conrail was a good acquisition target for both CSX and Norfolk. Conrail offered intermodal service, as well as sea-land services, in the Northeastern region. Thereby, it provided both of the potential acquirers with access to the lucrative Northeastern market. Conrail was also a viable acquisition target because it was inefficiently managed, and had the potential to increase its income through efficient management, superior service and cost reduction. One of the possible reasons for CSX’s bid could have been an attempt to prevent Norfolk from acquiring Conrail. CSX faced intense rivalry from Norfolk – the third largest Eastern railroad company. Norfolk had limited access to the Northeast market and was not able to service long-haul routes in the Northeast. Therefore, CSX feared that Norfolk was also looking to make an acquisition bid for Conrail, as Norfolk had also shown interest in purchasing Conrail when the government was privatizing the company. The suspicion of CSX was confirmed when Norfolk placed a rival bid for a $100 per share within a week of CSX-Conrail merger announcement. Over the next few months, both bidders engaged in an intense bidding war. 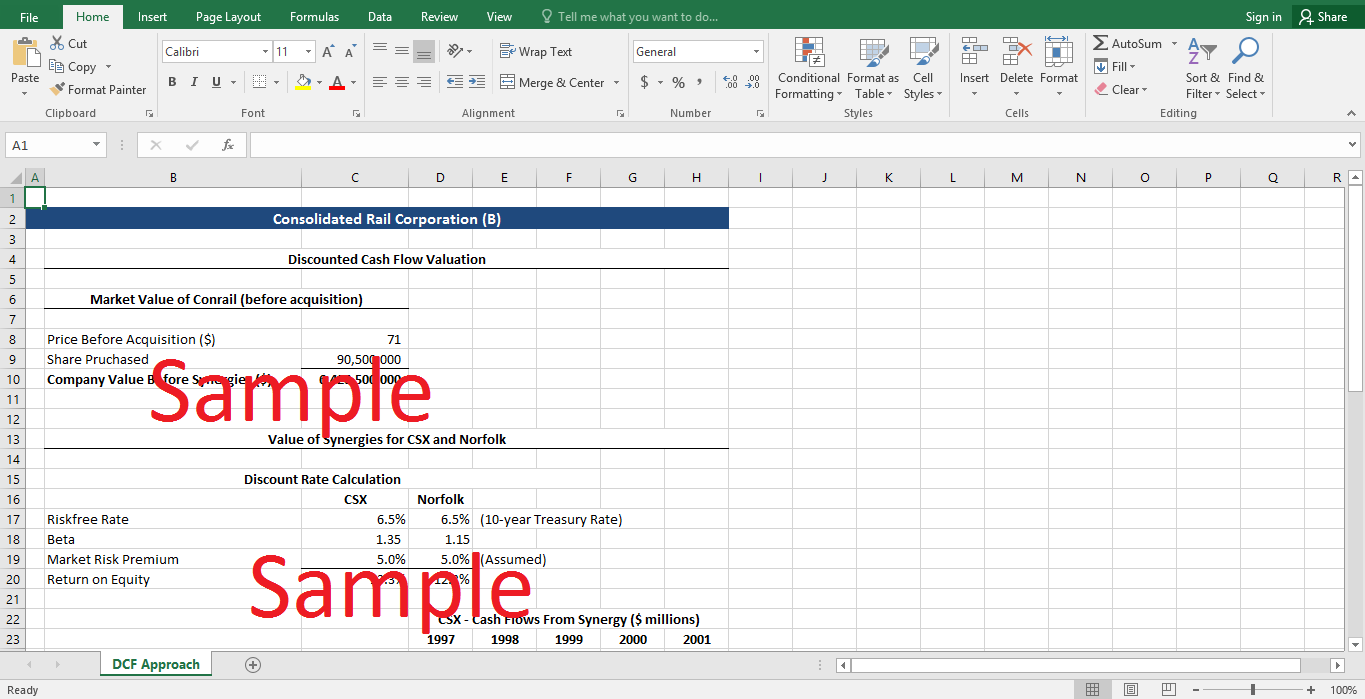 Case Analysis for The Acquisition of Consolidated Rail Corp. (B)

Norfolk Southern made a hostile bid for Conrail because the CSX-Conrail merger was going to result in huge revenue losses for the company. If CSX had acquired Conrail, the consolidated company would have stolen a major portion of Norfolk’s revenue. The CSX-Conrail merger would effectively shut Norfolk out of the Northeastern routes in the United States. Moreover, the transaction would also prevent Norfolk from achieving a competitive cost structure, which depended on savings associated with over-lapping operations and cost-effective long-haul contiguous routes. In addition to these reasons, a merger with Conrail also provided significant benefits to Norfolk. In short, Norfolk was not only negatively affected by CSX-Conrail merger, but it was also foregoing the positive effects of its own merger with Conrail. Therefore, it decided to make its own hostile bid for Conrail.

How much is Conrail worth? In a bidding war, who should be able to pay more, Norfolk Southern, or CSX? Please determine the price that each party should be willing to pay in a bidding war.

Without a merger agreement, the market value of Conrail’s publicly traded shares was $6425.50 million (the pre-merger announcement market price of $71.00 multiplied by the 90.5 million shares outstanding). From a theoretical perspective, CSX seemed to gain more from the merger transaction as the synergies resulting from its merger with Conrail were greater than the synergies resulting from a potential Norfolk-Conrail merger. However, it is important to note that Norfolk would lose a greater amount of revenue if the merger went against it than the revenue Conrail would lose if the merger went against it. Therefore, it is important to calculate the incremental effect of each company in case of a possible merger. In calculating the incremental effect, the possible losses resulting from Conrail merging with the competitor company should also be taken into account. To value the maximum price paid by each company (CSX and Norfolk) for Conrail, the discounted cash flow approach can be employed.

The rationale behind the discounted cash flow approach is that each company should be willing to pay a maximum of the current market value of the company and the present value of the synergies that it expects to be realized from the merger. The expected increase in cash flows resulting from synergies is also provided for both companies in the exhibits of the case study. These cash flows have to be discounted at the appropriate discount rate. It is argued that these surplus cash flows could be classified as additional cash that is available to equity shareholders of the acquirer. Therefore, the cash flows should be discount at the respective required returns on equity for both potential acquirers. The required return of equity can be determined by using the Capital Asset Pricing Model (CAPM). CAPM required estimates of risk-free rate, beta, and market risk premium. The risk-free rate is estimated to be equal to the 10-year treasury rate. The market risk premium is assumed to be 5%, as it is implied by historical difference in returns between S&P500 index and US Treasury rate. The betas for CSX and Norfolk are mentioned in the case study.

Using the required returns on equity for both companies as the appropriate discount rate, the total value of the synergies is estimated to be approximately $4.5 billion for CSX and $5.3 billion for Norfolk. Therefore, according to discounted cash flow model, the maximum market value of Conrail (for CSX) is $10.9 billion, with a maximum acquisition price of $120.1 per share. On the other hand, Norfolk can realize higher synergies from a merger with Conrail, and has a maximum estimate of market value of Conrail at approximately $11.7 billion. Therefore, it can afford to a pay a higher maximum acquisition price of $129.4 per share.

CSX believes that Norfolk’s bid would violate the CSX-Conrail no-talk clause in the merger agreement between CSX and Conrail, if Conrail engages in talks with Norfolk. Moreover, the time delays required in Norfolk’s bid imply that the actual present value of the bid is less than $90.00, if a discount rate of 2% per month is used. Therefore, the present value of Norfolk’ bid is less than Conrail’s initial cash offer of $92.50 per share and quite close to its blended weighted average offer of $87.67 per share. CSX challenges that the bid is not high enough to stop the CSX-Conrail merger from proceeding (by influencing the opt-out vote). CSX further argued that by accepting a bid that is not significantly different from CSX’s initial bid, the management will negate the fiduciary responsibility condition of the no-talk clause. Before the shareholders decided on CSX-Conrail merger (mid-January 1997), Norfolk  should either place a substantially higher bid for Conrail’s shares in order to influence shareholders and sabotage the opt-out vote or convince the board to support their bid. Since the current board is already in the favor of the CSX-Conrail merger and the merger clauses prevent them from supporting competitive bids, the only viable option is to influence the opt out vote by offering a higher share price to Conrail’s shareholders.

As a shareholder would you vote to opt-out of the Pennsylvania anti-takeover statue? What do the capital markets expect will happen?

The situation is quite complicated for shareholders. CSX is visibly anxious that shareholders might vote against opting-out, and is consequently increasing the bid price. It is also trying to emphasize the no-talk clause in order to make sure that Norfolk’s bid is not even considered by the shareholders. On the other hand, Norfolk keeps increasing the price to incentivize shareholders not to opt-out. It is also pressurizing the board to abandon the no-talk clause and consider their merger bid. Despite this apparent uncertainty, 85.5% of the shareholders agree to initially tender their shares in November 1996. The implication is that markets expect CSX will acquire Conrail. This also implies that the market does not consider that Norfolk would be able to convince management to break the no talk clause or bid high enough to influence the opt-out vote. However, as the date of the vote approaches, the market’s perception could change, especially if Norfolk makes a higher bid.

The Acquisition of Consolidated Rail Corp. (B) Case Solution