The relevant cash flows for the Super project are detailed in the excel model. The main heads of relevant cash flows are sales, cost of goods sold, advertising expense, taxes and investment credits. The investment in net working capital has to be taken care of in every year because it has an effect on the net operating cash flows generated from the project. 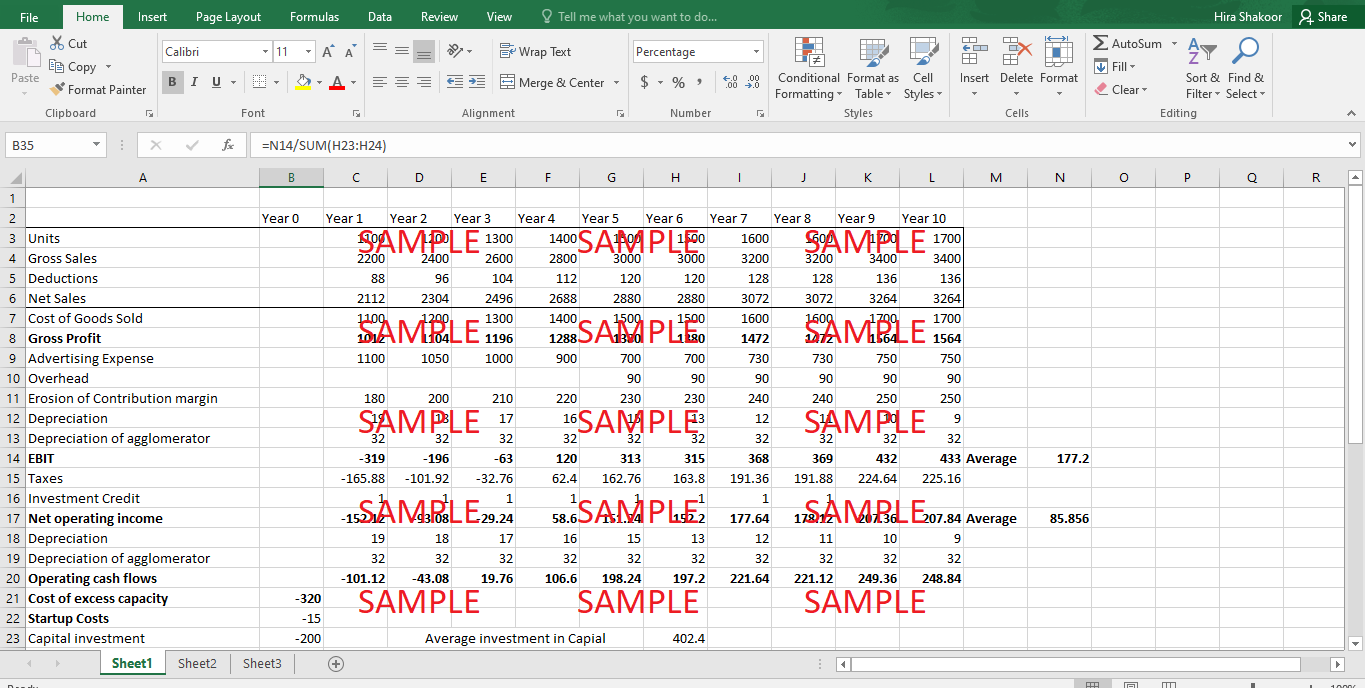 Case Analysis for The Super Project

The specific treatments of the main heads are given below:

Test marketing expenses were incurred while the product was not ready for launch and its feasibility was being tested. For the purposes of evaluating the super project now, these cash flows are not relevant and thus would be treated as a sunk cost, having no impact on the evaluation of the project. These cash flows were important when the decision to whether test market the product or not was under consideration. This cost cannot be saved if the project is rejected which shows that this cost should not have an impact on the evaluation process.

Only the incremental overhead charges should be included in the evaluation of the project since all other overheads will be incurred with or without this project. Overheads are the costs that relate to the company as a whole and should be treated as sunk costs for the evaluation of projects. However, if the projects call for additional overhead charges which can be avoided if the project is rejected, then these overheads have to be taken into account (as has been done for Year 5 and onwards).

The erosion of the Jell-O contribution margin has to be taken into account while evaluation of the decision to invest in Super Project. This is, in fact, the most crucial element to be taken care of. By the launch of Super Project, the sales of the company as a whole will be cannibalized and the contribution margin lost for the lost sales of Jell-O is a relevant cost for this project. The super project should create more value for the firm as a whole. If this cost is not accounted for then there is a possibility of choosing an alternative which in effect reduces the value of the overall firm as it were before the project. By introducing this cost in the evaluation process, the feasible option would be the one with the contribution margin more than that of the lost sales and the firm as a whole will benefit from the move.

5. Allocation of charges for the use of excess agglomerator capacity

The charges for the use of excess agglomerator capacity are indeed a relevant cost for the project. If the agglomerator were not used in the project, it could have been used in some other project, adding value to the firm. Thus, the excess capacity usage constitutes a cost for the project. For the correct calculation of the cost of the project, it is necessary to take into account this cost. Also, the cost of using the agglomerator can be avoided if the project is not taken up, which justifies its inclusion in the relevant cash flows. However, the building cost is irrelevant on the same grounds and thus will be excluded.

6. The attractiveness of the project

For the calculation of NPV, the free cash flows of the project were calculated as follows

The net present value measures the direct value that the project adds to the firm. However, it ignores the more tangible outcome like goodwill which could be potentially generated. The net present value of the project as calculating at 10% WACC (assumed) comes out to be negative by a huge amount of ($166.9). Thus this project will be rejected in terms of NPV. The NPV method is the most efficient way of evaluating capital investment projects because it incorporates all the crucial elements that should be taken into account. This figure is based on the estimated sales price, which can be increased in the future which will have a positive impact on the NPV.

The payback period method evaluates a project on the time that it takes to return its initial investment. The Payback period of this project comes out to be 7.859 years. Although this might be an attractive figure for General Foods this method of evaluating capital investments has many drawbacks. This does not take into account the time value of money nor does it consider any cash flows after the project pays back the entire investment. Thus basing a decision on this method of calculation will not lead to a rational decision.