The final result suggests the value is lower than the base case as the base case value was 12.61, while as per this scenario of acquiring a new player, the strategy value would be 12.25. Based on the model result, we can conclude that the base option sounds better than going with a new player. The major differences highlighted were negative EBITDA and cash flow in the first year. The revenue generated by applying 51 average points for the period of 1998-2007. The incremental revenue of 1.52 for every 1% increase in points was applied to get an eventual figure of revenue. The increase in operating expenses pertaining to an increase in salary of players by 10% will have a negative impact in the first year. 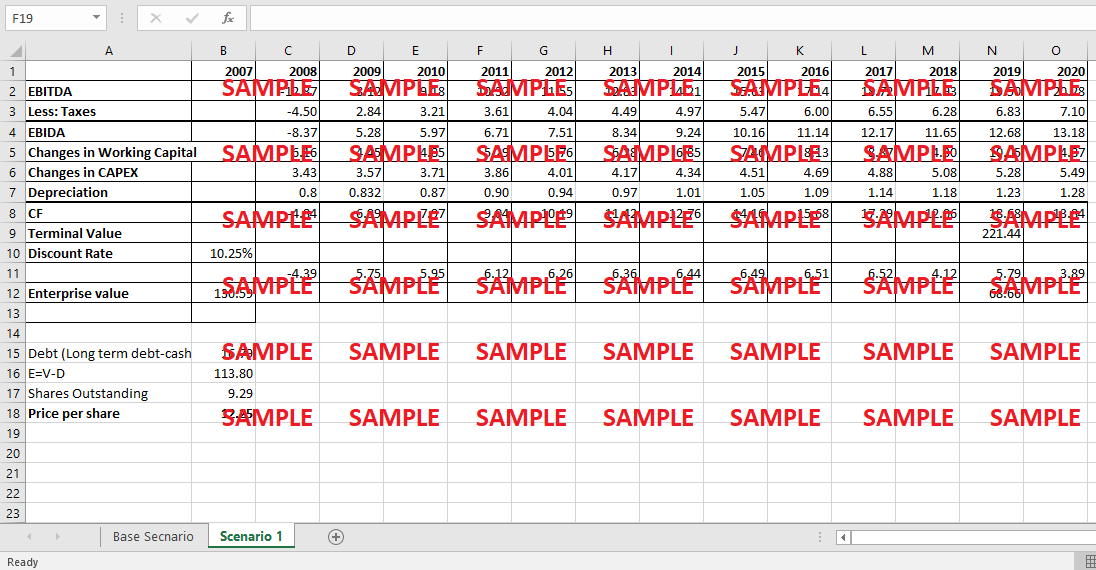 1. Assume that Tottenham Hotspurs continues to operate in its current stadium and follows its current player acquisition strategy (i.e. no change to its existing business structure). Based on this assumption,

i. Create a spreadsheet using the cash flows provided in EXHIBIT 5 of the case. Drawing on your spreadsheet, perform a Discounted Cash Flow (DCF) analysis and, using CAPM, determine the value of the company. Most, but not all, of the data you need for the CAPM formula is in EXHIBIT 1.

(Refer to Excel Sheet and Appendix 1 below).

ii. How does this value compare to the stock price of £13.80, the price stated in the case? Is the stock over or under valued? Write a short (one page) summary explaining your findings and conclusion.

The intrinsic value based on figures of financial statement of the company reveals that book value per share is 12.61 while actually; the stock is trading at 13.8. This signifies that stock is overvalued by 9%.

We got this value of 12.61 discounted back to 13 years after applying an estimated growth rate of 9% in revenue of each year, which resulted in the ultimate 12.61 pounds as an intrinsic price. If our assumptions regarding growth change, the value might differ. For example, we assumed that CAPEX and depreciation are growing at a rate of 4% each year and took 10.25% as a discount rate. We also assumed that our net working capital is growing at the rate of 9%, similar to revenue. Taking the present value of 10 years forecasted data gives 133.94 as the total value of cash flow. After deducting 16.79 of debt (Long term debt – cash), we got 117.15 as equity value, which pertains to investors. Dividing this figure with shares outstanding gave us 12.61, which is book value per share. If these rates vary, the entire model and figures will change, and thus the entire model will give a different figure. Although figure 12.61 has calculations behind it, 13.8 incorporate market sentiments and investor behavior as well. As an investor, it would be a good time to sell or say short Tottenham Hotspurs security in the market.

If we compare the enterprise value with the team valuation in exhibit 2, it appears that the Enterprise value would go down, and probably Tottenham Hotspurs might remain at its current position. The 156 current enterprise values are lesser than the 133 Present values that we got through forecasting.

This stock would be attractive for growth investor who looks for growing stock and not values investor who wants cheap stock. There is an opportunity to go short in this stock.

To further gauge whether our figures reflect the reality, we can Price to earnings ratio and compare trailing Price to earnings with a forward price to earnings. The higher P/E stock would signify there is more speculation involved in the value. But for that, we would need further information.

Another major assumption we have taken is a constant interest rate of 35% and a constant discount rate of 10.25%, which is not necessarily true, and we believe there will be a variation in these percentages with time, especially the discount rate factor.

As far as Capital asset pricing model figures are concerned, the value of 7.89% was calculated after applying 0.51 unlevered beta, a market risk premium of 6.5 %, and adding a risk-free rate of 4.57%. Based on CAPM, the value we got is 17.97, which signifies that stock is undervalued, and thus we should purchase stock as it will revert back to 17.97 from 13.68.