University Club at the University of Regina was undergoing through financial difficulties. It was difficult to continue to subsidize the loss-making club due to cut in the government budget. Therefore, ratio analysis was used to evaluate business viability. 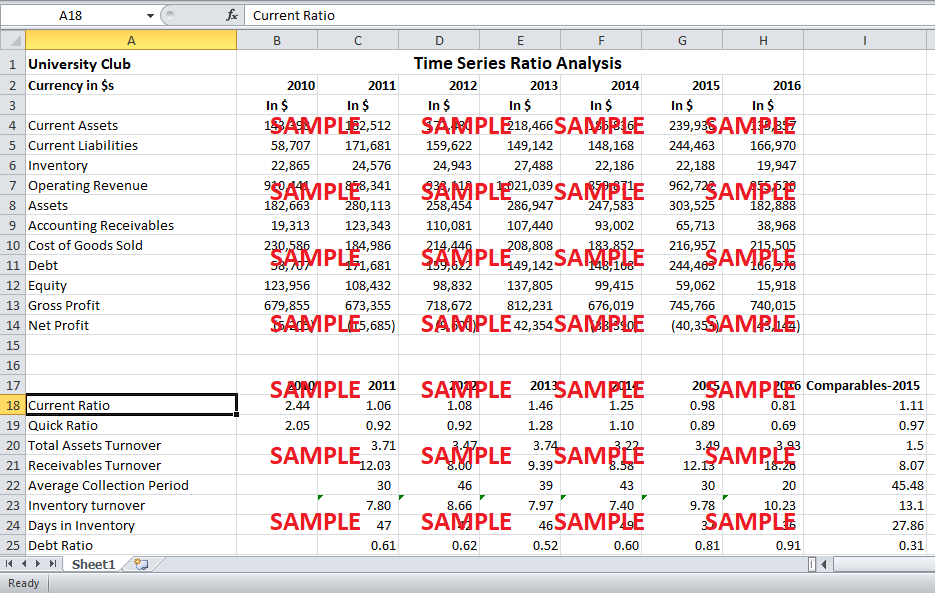 To evaluate the profitability, Gross Profit margin and Net Profit Margin were calculated for the Club for the past 6 years. The GP margin for the Club stayed consistent within 77% to 80%, which was higher than the average Gross Profit Margins of 67% of the two comparable Canadian clubs. However, the net profit margin for the Club was quite low against its comparable company average, which despite lower GP managed to earn a higher Net Profit. Thus, it can be analyzed that the operating, selling and general expenses are high for the University Club and if efficiently managed, the club could become profitable again. Based on the industry average, the position does not seem viable, as the comparable companies are also loss making which questions the viability.

The debt ratio and debt to equity ratio for the University Club can be seen to be following a rising trend over the past 6 years. This is quite higher than the industry average. Despite no long-term debt, the increasing level of current liabilities reflects increasing Payables. This is concerning as failure to pay on time may cause the creditors to force the club into bankruptcy (Ozkan, 2000).

Moving on, the liquidity ratios of the Club, which comprise of current ratio and quick ratio also, show a deteriorating position following 2014 after which the current ratio fell below 1. This showed that the business had insufficient resources to meet its current obligations (Saleem & Rehman, 2011). Furthermore, both the ratios are below the industry average, which supports that the liquidity position of the club is not stable, and can go insolvent.

Assets turnover figure is also quite high for University Club against the industry average. This reflects that the company has lower fixed assets. This is not as good as the company's fixed assets form its asset base. The debtor's collection period is above 30 days over the entire 6 years period considered. Based on the industry average of 20 days, the ratio is quite high. This can affect the working capital cycle as creditor payments will get delayed (Falope & Ajilore, 2009).