Although Lambert’s communication program is designed, especially, keeping in mind Irish laws of not being allowed to advertise directly to consumers; there are some modifications through which they can enhance the effectiveness of their communication program. Although the product can only be bought by the consumer through prescription, it would help WLI’s image to create awareness among the target consumers so that they do demand prescription for Niconil. As mentioned in the case, when patient ask their doctors regarding a strategy to quit smoking, ‘92% of the GPs would offer “firm and clear advice”’. If, however, consumers demand such prescriptions than the GPs would oblige if they feel that the product is genuine. Therefore, it is paramount for WLI to gain approval from the GPs and awareness about the product among the target consumers. 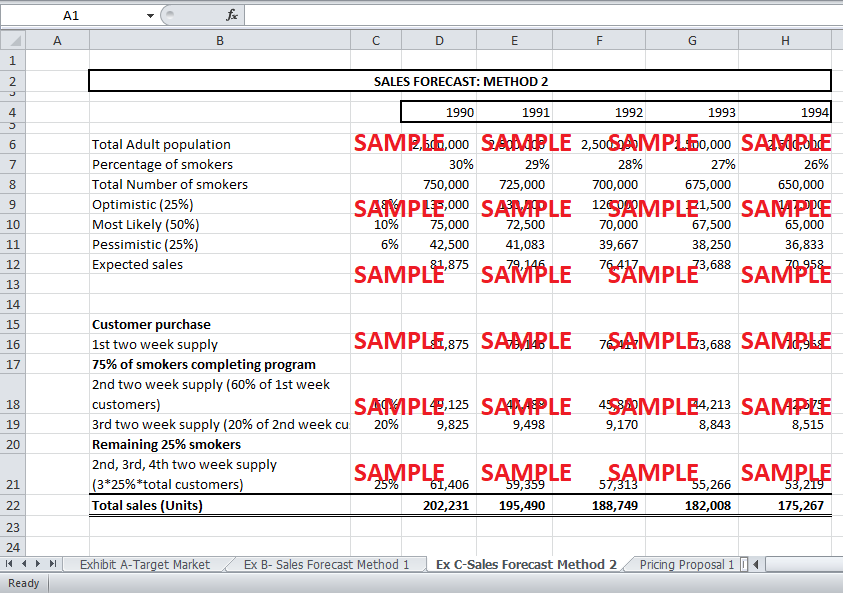 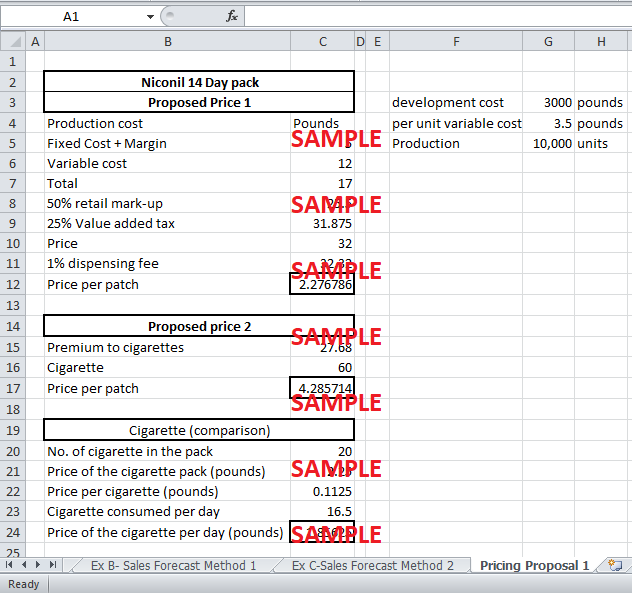 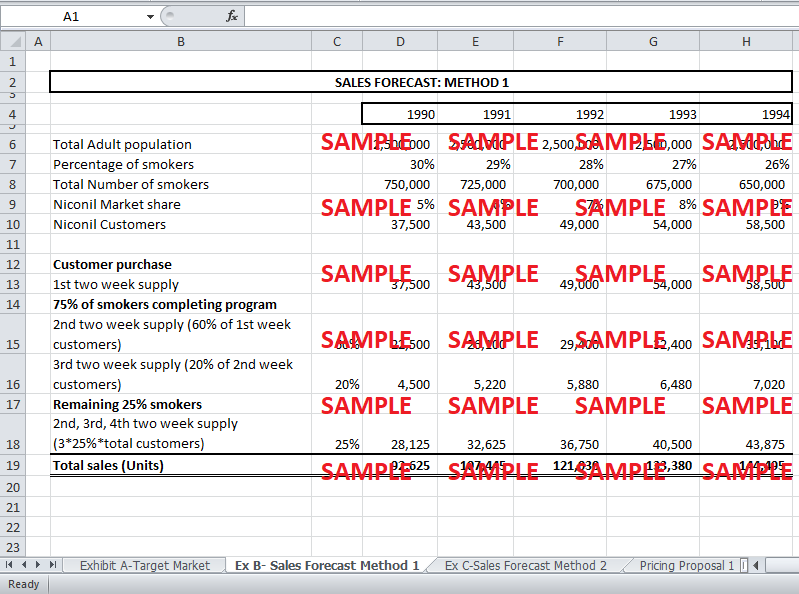 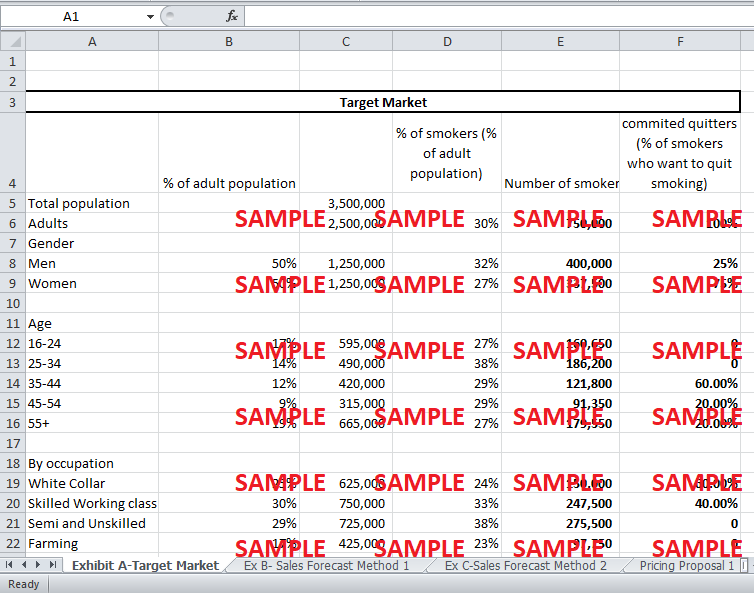 1. What should be the target market for Niconil? What is your estimate for potential sales to this target and why?

Warner Lambert (WLI), an international pharmaceutical company, was introducing a new product, Niconil, in January 1990. This innovative product was developed to aid smokers quit smoking. Niconil was a nicotine patch which, when applied, supplied nicotine to the bloodstream to reduce the negative physical effects of nicotine withdrawal.

WLI was the sixteenth largest pharmaceutical company in worldwide revenue. Considering WLIs reputation made through the introduction of two drugs in the previous months, there is a high probability that Niconil will be acceptable to Irish consumers. The total population of Ireland is 3.5 million. Of these 3.5 million, 2.5 million are adults. Broadly speaking, Niconil targets 30% of this 2.5 million. However, if we narrow down the target market we see that not all the consumers will want to quit smoking. The preference to quit smoking varies among the smoker depending on their age, gender and occupation.  . Exhibit A shows some important information, derived from 1989 survey, regarding Niconil's target market. The first two columns show the population distribution among gender, occupation and age. Next two columns show the distribution of smokers in each category.

The last column is the most important column to represent the narrowed down target market. As mentioned in the case, 10% of the total smokers will try to quit smoking. The column shows the distribution of the 10% of these people who will actually be committed to quit smoking. It shows that, according to the market research, 100% of these committed quitters are adults, 25% more females are committed to quit smoking then male, people above 34 years of age are more dedicated to quit smoking due to health issues and white collar and skilled professional will try to leave smoking under societal pressure. The percentage is that of people who want to quit in each category. They are just a vague probabilities, according to the case. These people are the target customers of WLI. WLI must try to ensure that these people are aware of limited side effects and success rate of Niconil usage.

In order to forecast sales of Niconil, WLI will require a study on the behavior of target customers. This study was conducted in 1989 surveying around 1400 smokers regarding Niconil. This study will facilitate in making accurate judgment regarding the response of the customers and the willingness to buy the product. The case study describes two methods for forecasting sales. These methods are discussed in the proceeding paragraphs.

Exhibit B shows the sales forecast using the assumption that 30% of the adult are smokers and 10% of these smokers want to quit smoking. Of these 10%, WLI will expect to capture 50% of these customers. This assumption seems valid because Niconil has very few side effects and, therefore, will easily be able to attract these customers. Furthermore, it is estimated that the percentage of adult smokers will reduce by 1% and the customer base of Niconil will rise by 10% (of the committed quitters) every subsequent year. This assumption is very conservative showing only a minor increase in market share. Nevertheless, the estimates can be altered once Niconil is launched and the response of those smokers who want to quit smoking can be assessed. Using these assumptions, the sales estimates are 92635, 107445, 121030, 133380 and 144495 14 day packs in 1990, 1991, 1992, 1993 and 1994, respectively.

Exhibit C shoes the second forecasting method using likelihood of purchase data in the survey conducted in 1989. According the data of the survey, of the total 1400 survey respondents, 54% wanted to quit smoking, 30% were willing to use Niconil and 17% were willing to go on purchase it. As a rule of thumb to get more conservative percentages we divided these percentages by three. Then, we defined three scenarios; optimistic, most likely and pessimistic. Under the Optimistic Scenario, all those who want to quit smoking will use Niconil (i.e. 54%). After dividing it by 3 we obtain that 18% of the smoking quitters will use Niconil. In the same way, it is most likely that those who are willing to buy Niconil will actually go and buy it. Thus, 10% of the people quitting smoking will buy Niconil. In the worst possible scenario, only the 17% of the people who are actually interested will purchase the product. Moreover, in order to calculate expected number of customers, it is assumed that the probability of occurrence of the pessimistic and optimistic event is 25% each and that of most likely situation is 50%. Therefore, using this method, the forecasted sales for 1990, 1991, 1992, 1993 and 1994 are 202231, 195490, 188749, 182008 and 175267 respectively.

Although, both these suggested methods seem relevant and appropriate for sales forecasting, each has its own merits and faults. The former method does not use the results of the survey and goes on to estimate sales based on demographics and assumptions. The method does use very conservative estimates of growth and expected customer base. On the other hand, the later method does use the results of the survey and incorporates it in the forecasting. Additionally, the scenario method does result in higher sales estimates which might have the tendency to be overstated. Keeping this in mind, I would suggest the later method which uses the likelihood of purchase data of the 1989 survey because the forecasting method seems more realistic and is backed by the results of the survey. Despite the fact that it gives very high sales estimate, the method is relevant for Niconil.  Moreover, when future sales forecasting is done the likelihood of purchase method will look at historical trend and consumer behavior while method one will ignore it. If the probabilities or the percentages reflected in each scenario occur different than anticipated then these values could be changed to find more accurate estimates of future sales.

2. What should be the packaging and pricing strategy for Niconil? Why?

While considering the packaging and pricing strategy, it is critical to first analyze the circumstances faced by WLI during the launch of Niconil. Firstly, Ireland government has not agreed to allow the sale of Niconil without prescription. Therefore, the only channel of boosting sales available to WLI is through the general practitioner (GP). Secondly, the product i.e. Niconil only alleviate the physical craving for nicotine and does not provide any solution for psychological addiction.

Niconil should be available for sale in both 7-day supply as well as 14-day supply. However, the greater production in Ireland must be for a 7-day supply rather than a 14 days’ supply. This is mainly because, as mentioned in the case, very few Irish people purchase multi-week supply. However, 14-days supply should also be available for sale. The 14-days supply would be more popular in Europe because there people preferred buying cartons. Furthermore, a 6 week carton would not be a very good packaging strategy as the time to remove smoking addiction differs from individual to individual. Also, even after addiction of cigarette is removed people might get addicted to Niconil which will create a very negative brand image for the product in the long run. For a six week pack, most consumers assume that to remove addiction one has to consume the entire carton. Considering the side-effects like nausea and skin irritation that Niconil causes, this might lead to a lot of problems for the consumer of the product.

Also, Niconil packaged with the support system as a complete smoking quitter aiding program. A supplement support program which contained several neatly packaged components like a booklet on tips for smokers who are quitting, a diary to record progress and audio tape containing instructions to help relax the quitters. This was an appropriate addition to the product. This is because when the support system is provided with Niconil the consumer will be able to leave smoking completely by curing both the physical and psychological problems of the smoker. Otherwise, without the support system the customers will not be cured of his addiction and they will question the success of the product. This will lead to a bad word of mouth which will drastically affect the sales of Niconil. Secondly, WLI will need to convince GPs of Ireland regarding the benefits of the use of Niconil and its success in helping committed quitters. A support system with the product itself will be able to convince the GP that the product is a complete solution for those who want to quit smoking. Otherwise, they may not endorse the product because it does not provide a complete solution and has side effects. Niconil packaged with the Support program would also help WLI gain recognition in the Irish National drug board as a product that could be sold without prescription.