This paper starts with the analysis of the proposed Lehman-Berkshire Hathaway deal. It has been evaluated from both investors’ and borrower’s perspectives. How this deal is unfavorable for Williams and what are the implications of the deal terms for Williams, is discussed in details. Further this paper explains the problems faced by Williams, how actually problems occurred, how they decided to address them. How this financially distressed position can be a reason for compromising their business, is also discussed. In the end, Williams’ CEO’s view point is discussed. That includes whether he should accept this deal or not and what other alternatives can be used. 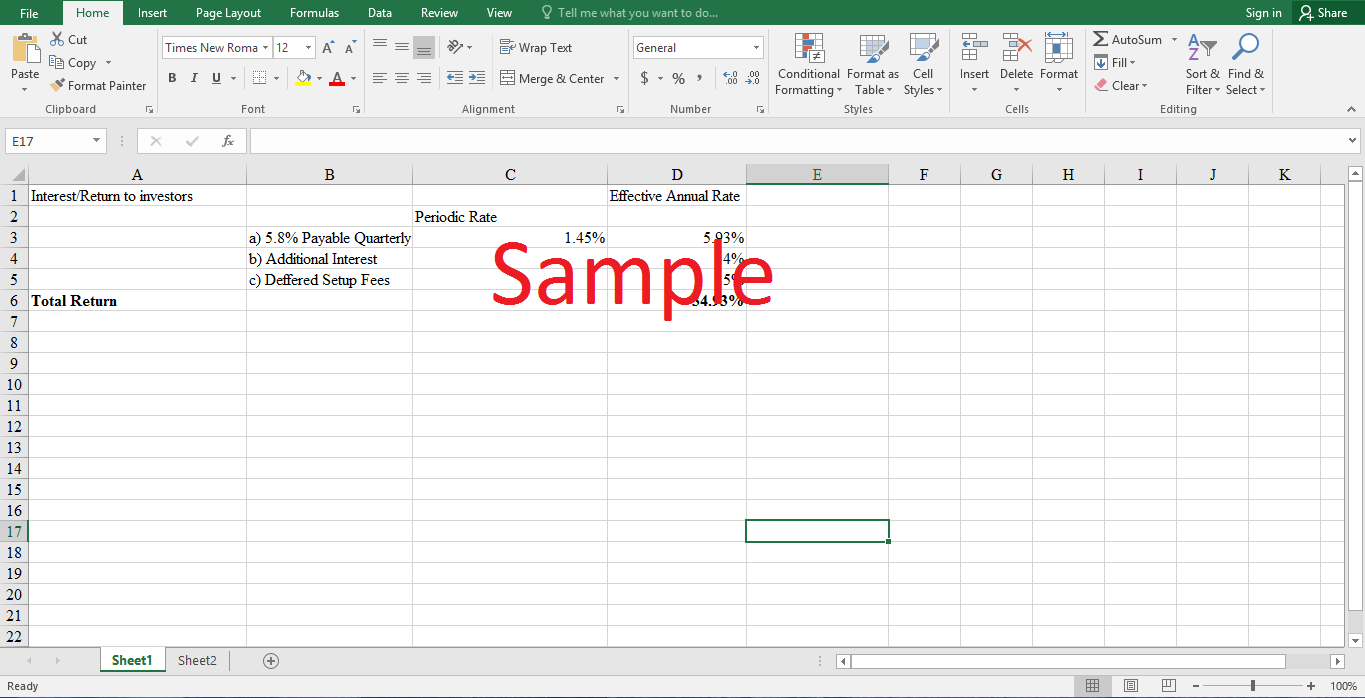 1. Evaluate the terms of the proposed 900 $ million financing from the perspective of both parties. How would you calculate the return to investors in this transaction? If you need more information, what information do you need?

Firstly, case is evaluated from investor’s point of view. First component in analyzing the loan is whether there is enough collateral available or not. The loan is secured by guarantees by Williams Companies and capital stock and assets of RMT of worth $2.8 billion. This is good enough collateral for a loan of $ 900 million, which is approximately 34% of the assets collateralized. Second component to be considered is return. Here, question to consider is “does return exceed (at least justify) the risk?” As, calculation shown in the excel sheet, total effective annual return is around 35%. One assumption here is RMT assets are not sold by the deal date. It is substantial return for investing in this highly indebted company. All the covenants are negative for Williams, which means they are favorable to investors. These covenants will help investor in securing their investment.

Now, let’s see from Williams perspectives whether this deal terms are in his favor or against him. Collateral and guarantees required is substantially more than the loan amount. This is not in his favor because, if they collateralize all of RMT assets for short term loan facility, it will create problems for them if they further need loan. Interest amount is very high. Even though, their rating is B1, but, still 35% is very high. For further commenting on this rate, one needs to know the interest rate on other participants bond with the same rating. This would have greatly helped in judging whether cost justifies the borrowing or not. It is not very clear from the case why they need this short term loan, when they already have unused credit facility of $ 800 million dollars and cash of $ 450 million.

Covenants are very strict, even though in 2001, William’s EBITIDA interest coverage ratio was 4.31, which is very as compared to its competitors. This ratio greatly depends on revenue, so if sales decreases, this ratio would suffer because the interest rate amount is fixed. In 2002 till June 30, this ratio has decreased substantially. As earlier discussed because of this covenant Williams has to stop its communication business, so they must think carefully before agreeing on this term. If Williams is compared with its competitors mentioned in the case, Williams has almost always spent a lot more in capital expenditure than its competitors. Restricting capital expenditure to $ 300 million might create problems for them in the future. In short covenant terms are very unfavorable for Williams.

2. What is the purpose of each of the terms of the proposed financing?

A lender is one, who lends money for interest rate, which is actually the price of the lending. Borrower is one, who buys money and interest rate is cost for him. Mentioning them helps in identifying, who is actually giving money and who is taking it. Maturity helps in identifying when amount will be returned. Initial principal is the amount that would be given to borrower at the time of start of the deal and will be returned back at the maturity. Purpose of identifying security/guarantee is what portion of assets will be sold if the borrower is not able to fulfill his commitments. It also useful because Williams has borrowed from many other sources so it is very important to identify what portion is secured for what amount. It also prevents Williams from borrowing any further funds by collateralizing these same assets. Required payments help in determine the costs for Williams and price for its lenders. Main purpose of covenants is to make sure the borrower must not take excessive risk with the lenders money. It basically disciplines the borrower and safeguards lenders amount. If any of the term is violated, lender can take charge of the collateralized assets and claims its principle. These are very unfavorable particularly in this case; these can become a reason of bankruptcy. Other preconditions of closing are basically conditions that lender first wants borrower to fulfill if borrower actually wants to close the deal. This term is contingent for closing of the deal, which actually means, deal will only be closed if these conditions are fulfilled first.

3. Conduct an analysis of William’s sources and uses of funds during the first half of 2002. How do you expect these numbers to evolve over the second half of 2002? What is the problem facing Williams? How did it get into this situation? How has it tried to address the problem it is facing?

In the first half of 2002, Williams has $25 million from common stock, $840 million from long term debt and $403 million from other sources. Out of this amount, they have given dividend of $207 million, which means they have net cash flow from financing activities of $1061million. They have invested $936 million dollars in capital expenditure, which means around 90% of borrowing is used for capital expenditure. It’s good in a sense that, at least some forms of assets are produced against this borrowing. If one relates this point to new proposed short term financing covenant number 4, which actually requires William to limit its capital expenditure, then, this point does not support new borrowing. Even if, past figures are considered, one thing is very clear that the main use of financing is capital expenditure. These points do not support this financing facility. Williams has to return $500 million in the second half, and if William does not avail the facility offered by Berkshire, this figure might decrease but need some financing as they will be in tough liquidity position.

Main problem Williams currently is facing its liquidity position. They are operating in a business where liquidity is more important than profitability. However, due to company’s strategy of relying on excessive debt, they have used a lot of debt. That has decreased their rating and increased yield to their bonds. Now they further wants to borrow but cannot get more money on reasonable rate. Main problem started when they were not able to fulfill the covenant terms in their telecom business, which eventually they have to close. Even for winding up the operations and guarantees Williams has to bear a loss of more than a billion dollars for full filling the creditor’s obligations. This problem coupled with other issues such as excessive debt financing; customers lost faith in energy trading business; increased yield; downgraded credit rating and SEC inquiry have worsened the situation. They have tried to follow the four fold approach which includes selling assets, reaching a resolution for its energy and trading business, managing and monitoring cash and business and rightsizing.

4. Some might describe Williams as financially distressed. What evidence is there that Williams business may be compromised as a result of its previous financial decisions?

Williams has excessively relied on debt financing, which does not only has increased its debt exposure but substantially downgraded its credit rating and increased yield. Currently they are facing problems in borrowing funds further. This situation is an indication of a financially distressed company. Their total debt has reached a level of $12 billion; still they are in severe liquidity position, and looking for more funds. In 2012, there EBITDA interest coverage ratio has decreased substantially, if this situation continues, they will not be able to pay the interest amount as it becomes due. Even if, they get loans as Berkshire has offered a deal to them, but such deals will be very unaffordable for them to accept. As already mentioned this business needs more cash, which Williams does not have, and also they don’t have access to affordable financing, which will create problems in the future and they will have to compromise on their business.