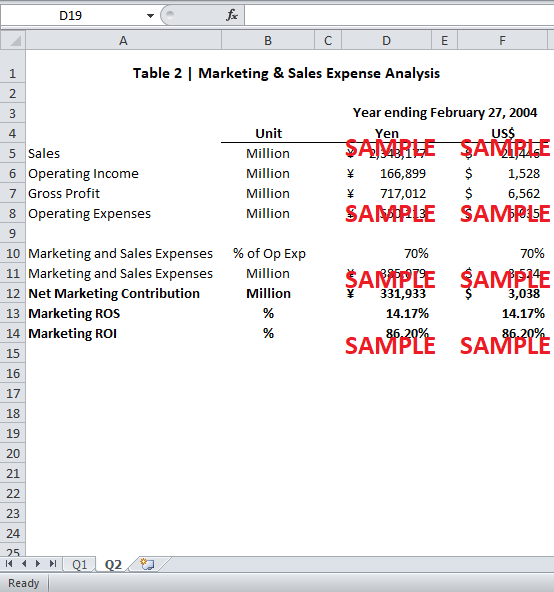 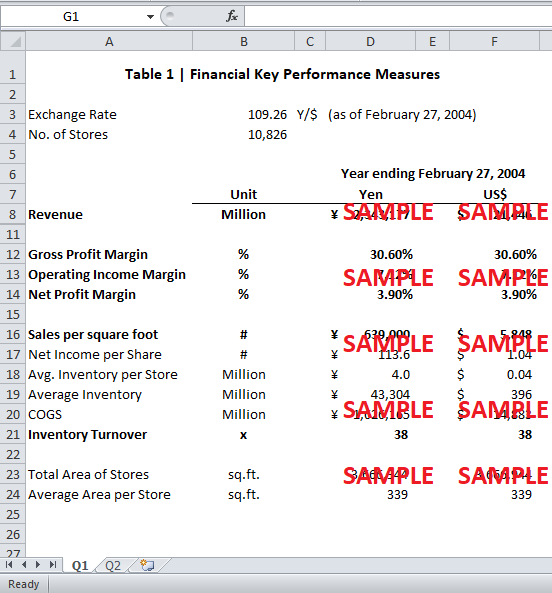 Moreover, the gross margin of the company is 30.6%, as given in Exhibit 1d. The Operating Income margin is 7.12% while the net profit margin is 3.9%. The Inventory Turnover has been calculated by dividing the Cost of Goods Sold (COGS) by Average Inventory per Store. The Average Inventory per Store is worth ¥ 4 million or US$ 36,610 approximately. Since the total number of stores of Seven-Eleven Japan is 10,826, the overall average inventory for the company is ¥ 43,304 million or $ 396 million. The Cost of Goods Sold has been obtained by subtracting the gross profit from the revenue. The Inventory Turnover obtained by dividing COGS by the average inventory is 38. This implies that the inventory is purchased and sold 38 times in a year.

3. Retail management at Seven-Eleven Japan, using Tanpin Kanri, is slightly different from the normal industry practice. Most of the supply chain networks implement automatic replenishment system to replace the inventory that has been sold out, using the point-of-sale (POS) data. Normatively, the items that have sold well in past are ordered in higher quantities. Contrary to this, the replenishment system used in Tanpin Kanri involves other factors in addition to past data in order to gauge the future demand. The employees obtain POS data and incorporate other factors to determine the future demand of a product. As evident, while both use POS data in their inventory replenishment systems, the key difference is that Tanpin Kanri has a forward-looking approach when ordering inventory while other stores rely on past trends only. Moreover, Tanpin Kanri has a manual process of ordering inventory involving human judgement of local employees as opposed to an automated system used by other stores. Another important difference in the Tanpin Kanri system is that POS data is used to identify and eliminate shelf warmers rather than items that sold well.

4. The term “hypothesis” implies “expected demand” according to the judgement of certain local employees. The store employee take the POS data and incorporates other factors that might affect demand to estimate the demand of a certain product. Based on this analysis, the employee will theorize a certain level of demand for each product and whether or not a certain product will sell. This theory or estimate is called hypothesis as this is only their expectation/belief which is yet to be tested.

The retail store employees are responsible for “hypothesizing.” It is their responsibility to understand what might affect demand and observe such factors over time such as consumer activities and purchase behavior, in order to improve the sales activities as well as derive demand.