FPL group is a utility company that has been operating in Florida as a monopoly. As part of its deregulation programs, the United States government is considering a deregulation of the utility industry. Such deregulation has already started in other states like California, and the affected utility companies have realized significant losses because of increased competition. FPL is considering a decrease in its dividend payout ratio in order to conserve resources in the wake of a possible deregulation and changing industry landscape. It is determined that the company can either decrease its dividend payout over time by maintaining a constant dividend or effect a swift decrease in dividend payout by making an immediate dividend cut. Although MM model dictates that dividend policy in irrelevant, the dividend cut might accompany a decrease in share price because of the strong clientele and signaling effect in the utility industry. Moreover, it is believed that the current stock price assumes a strong dividend growth rate, which might not materialize in the adverse industry climate. Therefore, Kate Stark, the analyst following FPL Group, should issue a sell recommendation on the stock. 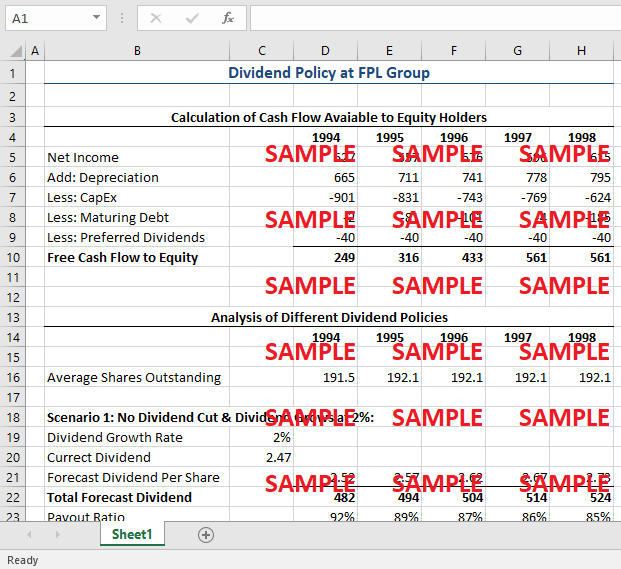 Case Analysis for Dividend Policy at FPL Group Inc A

FPL Group is Florida’s largest electric utility company. The company was formed in 1925 through the consolidation of numerous electric and gas companies. FP&L grew steadily over the next 50 years until rising fuel costs, operating issues, and construction costs began to decrease profitability. To address problems in operations, FPL implemented quality control program, which reduced the scheduled downtime from 18% to 4% and decreased customer complaints by 60%. The new chairman, Broadhead, emphasized a commitment to quality and customer service. He also increased focus on the utilities industry – expanding capacity, and improving cost positions. The company’s performance improved drastically in the recent years. Standard & Poor’s ranked FPL amongst the top 10% investor-owned utility companies. The company performance is expected to be good in the coming periods as it is expected to grow at a higher rate than the industry average. However, the changing landscape of the industry poses certain risks to the future performance of the company. This has given rise to fears that the company may cut its future dividends. This has prompted a review by Kate Stark – an equity analyst following the company.

Until the 1970s and 1980s, the government played a major role in determining the rates, returns, and capacity planning of the power industry. Congress passed several laws regulating the sale of wholesale energy and even formed committees to monitor utility companies’ dealings. During the 1970s and 1980s, deregulation weakened the monopolies in many industries. The focus of the deregulation was now shifting towards the electric utilities industry. In 1992, the National Energy Policy Act (NEPA) was passed that required utility companies to make their transmission lines available to third-party users. Further deregulation might even allow competition in the distribution of electricity to end users. This poses a high risk to the competitive position of FPL. Although FPL is quite efficient in large, investor owned utility companies, it faces a considerable risk from smaller operators under a possible deregulation. California and Michigan have already adopted a certain form of deregulation in the distribution segment: retail wheeling. Retail wheeling allows customers to buy power from any utility, not just their local monopoly supplier. Utility companies in California indicated an average loss of 8% of market value each year because of retail wheeling.

The industry is also characterized by high payout ratios. Data about the investor owned utilities in the Southeast United States reveal that the payout for most companies is higher than 70%. FPL has one of the highest payout ratios of 91%. FPL has also maintained an increasing dividend for the past 47 years - the third highest streak amongst all the publicly traded companies. Miller & Modigliani argues that the dividend payout policy should not matter for an individual. MM model would theorize that, ignoring the tax differences, a decrease in dividends would have no effect on the value of FPL. A decrease in dividends would be compensated by an added increase in the stock price of the company (capital gains) such that the total return remains the same. Thereby, an investor can create ‘home-made’ dividends by selling a portion of his shares.

MM model makes certain restrictive assumptions (such as no tax differences) and ignores many external factors. Many factors influence the dividend policy of a company. Two factors that are relevant to the case of FPL are clientele effect and signaling. There are certain investors who might prefer a high dividend payout ratio. Such investors might have invested in FPL since it has historically paid high dividends. This assertion is also supported by the case study where the shares of FPL are described as a substitute for treasury bonds. Therefore, a drop is dividend policy might not be welcomed by the clientele that prefer high payout stocks. Such investors might want to sell their shares because of low payout ratio, leading to a fall in stock prices. Similarly, dividend increases are meant to signal the competitive strength on the company. This is especially true for a company like FPL that has a 47-year streak of increasing dividend. If the company suddenly decides to make a dividend cut, investors might take it as a negative signal about the future performance of the company. The signaling argument hold some traction because it is reasonable for investors to believe that the company would not want to break its 47-year streak unless the dividend cut is a last resort measure that is absolutely necessary to maintain the profitability of the company.

There seems to be a strong presence of signaling and clientele effect in the utility industry. Historically, dividend cuts by companies have not been received well by investors. In two previous cases, stock prices fell by more than 20% following a cut in dividends. Interestingly, both the companies were financially healthy and the cut is dividends could not be fully attributed to worsening performance of the company. Therefore, it might not be desirable for a company to cut its dividend in the utility industry. FPL should not be looking to cut cut its dividend unless it is necessary.

The company’s has already indicated that it considers its payout ratio to be too high. Therefore, it is clear that the management wants to decrease the payout ratio to the lower spectrum of the industry payout ratios. Dividends are a use of funds available to equity holders. It is important to estimate the funds available to equity holder before we can comment on the appropriateness of different dividend policies. Free cash flows to equity (FCFE) is a measure to the cash flows available to equity shareholders. The attached spreadsheet details the calculation of FCFE. It is calculated by adjusting the net income for non-cash charges (depreciation and amortization), capital expenditures, debt, and preferred dividends. The FCFE details the maximum cash that can be distributed to shareholders as dividend. Therefore, the FCFE can be compared to various possible dividend policies to investigate their prospects.