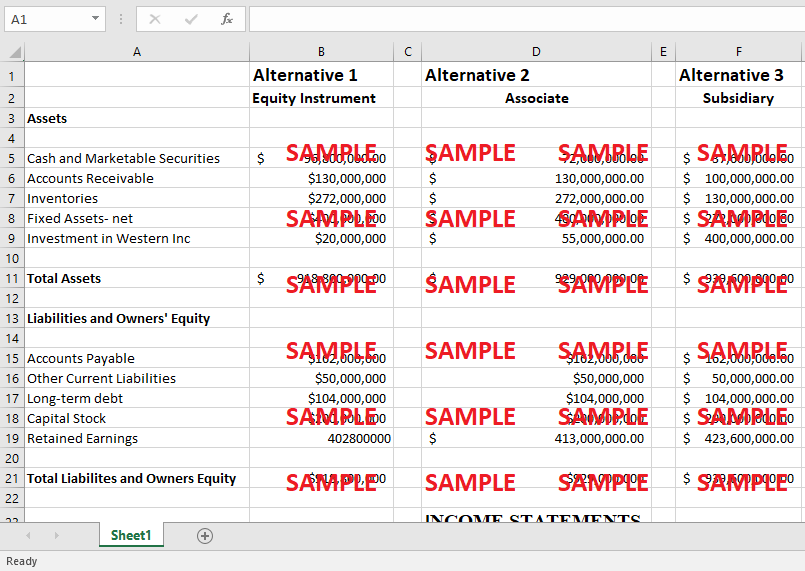 As the company owns 15 % of equity in Western Inc, dividends of 15 % from the net income of Western Inc would be added to the cash account of EMI and will also be added back to the equity section in retained earnings. In the Income Statement, dividends received would be added as Other Income, which would increase, EMI’s net income. The standard IAS 39 would be applied to equity instrument where if the intention for sale is within one year of an asset than it would be categorized as Held for Trading and any unrealized gain or loss would be charged in Profit and Loss statement. If an asset would be retained for more than a year, than it would be classified as “Available for Sale”, and any unrealized gain or loss would be charged in other comprehensive Income.

The second alternative is that EMI acquires 30 % of Western Inc, thus according to IFRS standards, this would mean that the parent company, EMI, is creating as its associate. EMI will have significant influence over Western Inc financial and operating policies. In the balance sheet, investment account of $ 55 million is created after adding post acquisition profit of $23.4 million and deducting the unrealized profit of $ 8.4 million. In the equity section, $ 55 million is added to retained earnings. In the Income statement, $ 15 million is added as Income from Associate which is calculated by deducting $ 23.4 million from $ 8.4 million. EMI has created Western as its associate, and it has significant control over its operating and financing decisions. Also, it has 30 % share in Western’s net income. The standard applied for the association will be IAS 28 and equity method would be applied where the parent takes the post acquisition profit share.

The third alternative is that EMI acquires 80% of Western Inc, which according to IFRS standards mean that it has created Western Inc as its subsidiary. EMI will have total control over Western Inc operating and financing activities and will earn 80% of Western’s profit. Goodwill is calculated as Non controlling interest, and other adjustments are deducted from initial investment. Original investment is deducted from cash and dividends received is added. In the equity section, dividends received are added, too. Business combination IFRS 3 would be applied where the company will be shown as a single economic entity and Western Inc as its subsidiary. Any barter transaction will not be accounted, and profit of the parent company in the subsidiary will be shown in profit and loss statement of the parent company.