Cost of capital is the cost a company bears for raising funds. It is a useful parameter as it enables the investors to determine the financial feasibility of multiple investments or projects by matching the total returns with the cost (Miller & Modigliani, 1958). From the balance sheet, it can be seen that Encana has mainly financed through a combination of short-term obligations as well as long term debt obligations as well as equity. The long-term debt has been much expensive for Encana as compared to the short term debt but it would be much practical to take the bond yield as a metric to determine the cost of debt rather than the coupon rate. Hence, cost of capital can be equated with the total cost of doing business and it is preferred to retain it lower levels so that the business’s profitability can be improved and there is more money available to retain and reinvest in the business (Hung, et al., 2002). 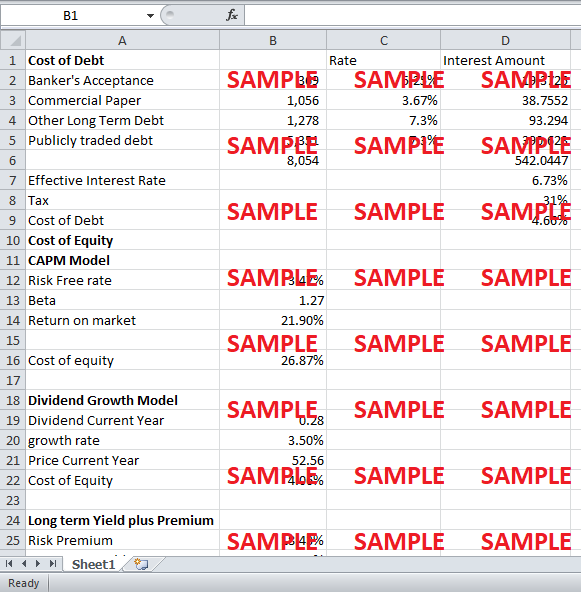 Case Analysis for Encana Corporation The Cost Of Capital

2. Critically discuss and calculate the cost of debt in relation to EnCana. Include in your discussion the significance of using a before-tax or after-tax rate for the cost of debt.

The cost of debt concerns with the interest rate that the business has to pay in relation to the debt it has taken from banks in the form of loan, bond or some other debt instrument (Van Binsbergen, et al., 2010). In the case of EnCana, the short-term debt of the company is quite less as compared to its long term debt, on which it bears different rates of interest based on the maturity of the debt. The short-term debt of the company is only borrowed from two sources which comprises of short term notes and commercial paper. While the loan from banks is 5.25%, the interest rate on three-month commercial paper that it takes is 3.67% which is again significantly low. However, to calculate the total cost of debt, a weighted average need to be taken for different borrowed amounts against their respective interest rates.

The cost of debt would therefore be calculated as follows:

When calculating the cost of debt, it needs to account for tax adjustments. That’s why the total amount of income tax that can be easily charged to the business is reduced because of the interest rate that has been paid on debt. This is also discussed to as the interest tax shield. It is for this reason; the tax deductibility helps in lowering the overall cost of debt, when comparing it with the gross cost of debt. Hence, it is important to use the after tax rate for the cost of debt calculations as it gives a realistic picture (Mello & Parsons, 1992).

3. Critically discuss the cost of equity providing three methods of how it is calculated.

The cost of equity refers to the financial returns that a company has to pay its equity investors for the amount of capital they have invested in the company. It is important for the firms to lock in a lower cost of equity as it determines the predictability of revenue stream and the profitability of the company (Botosan, 1997).