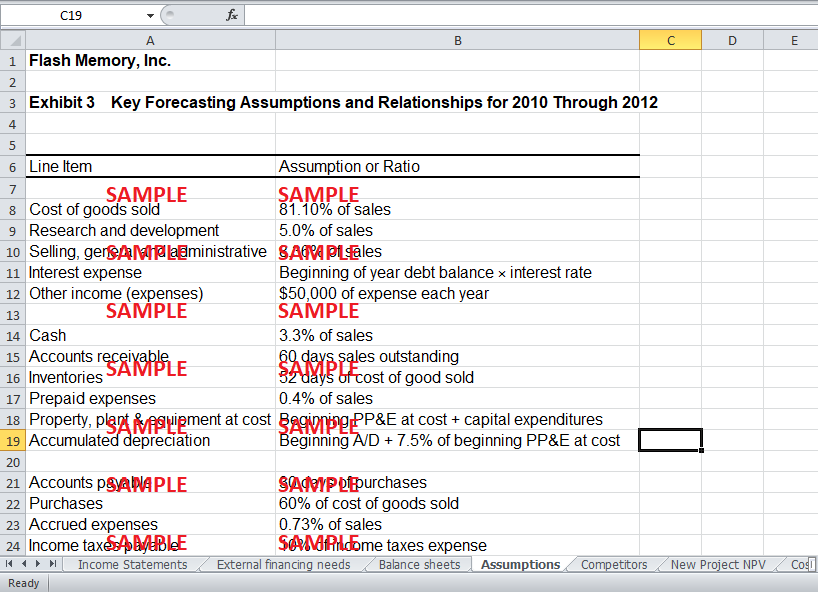 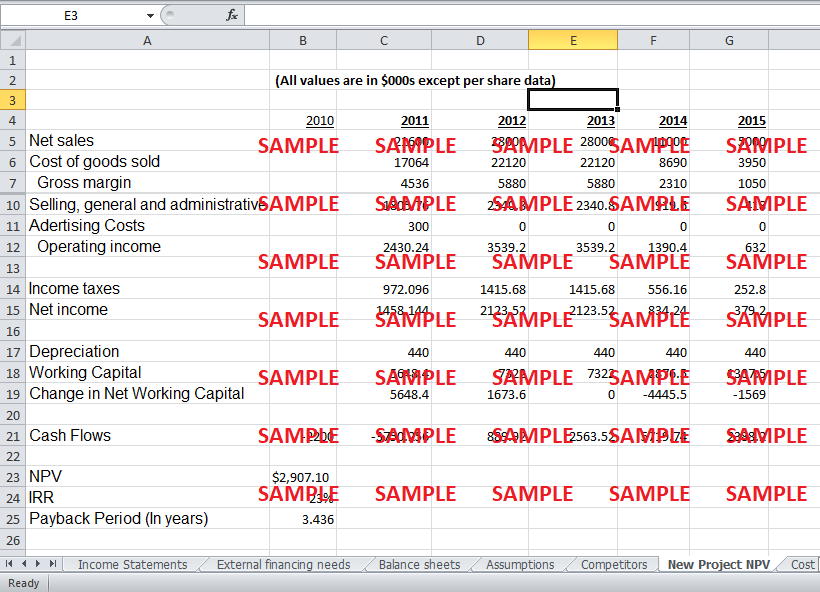 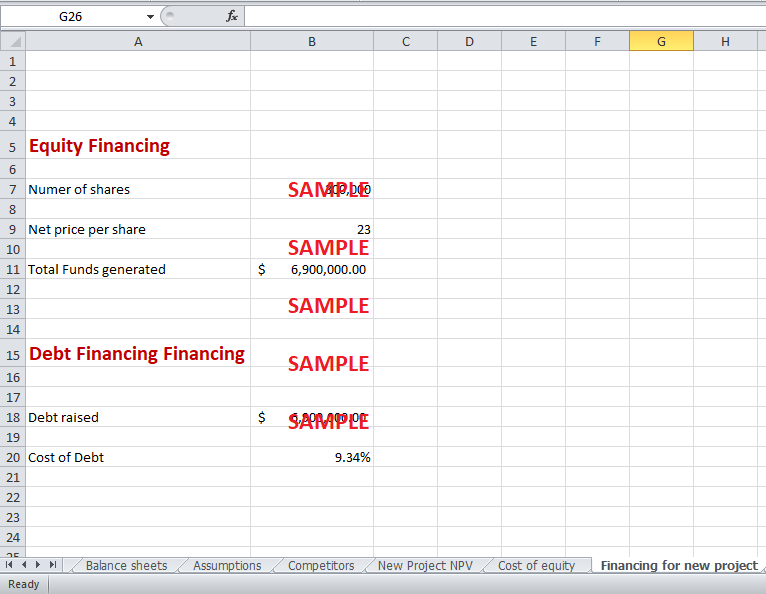 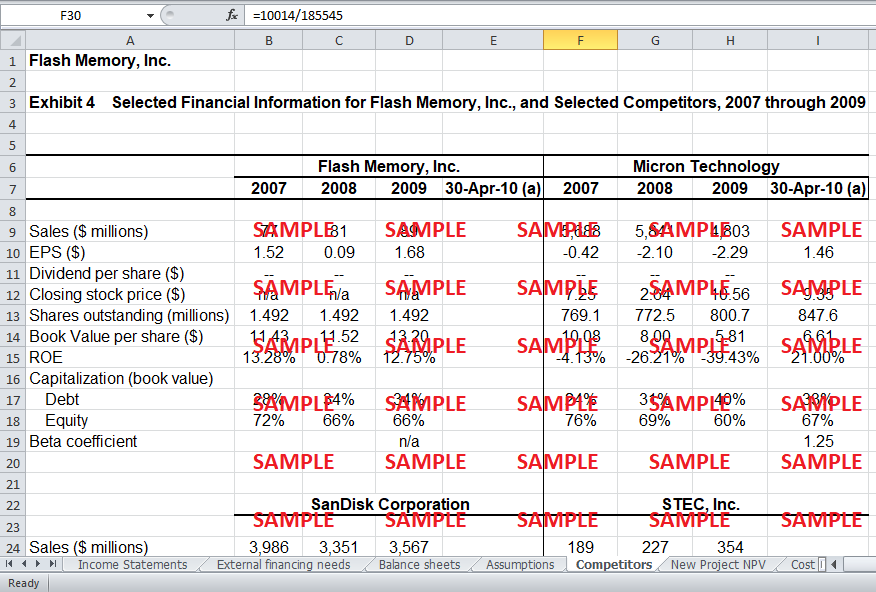 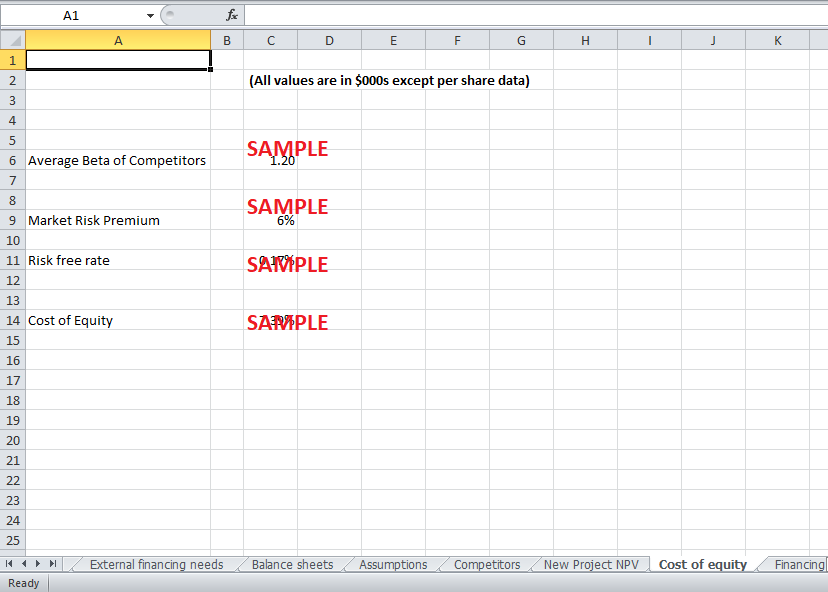 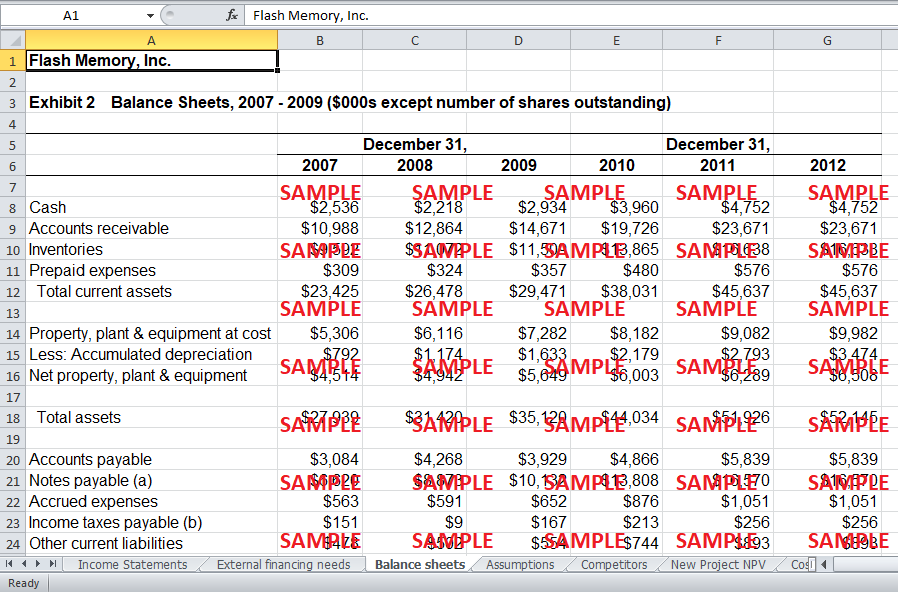 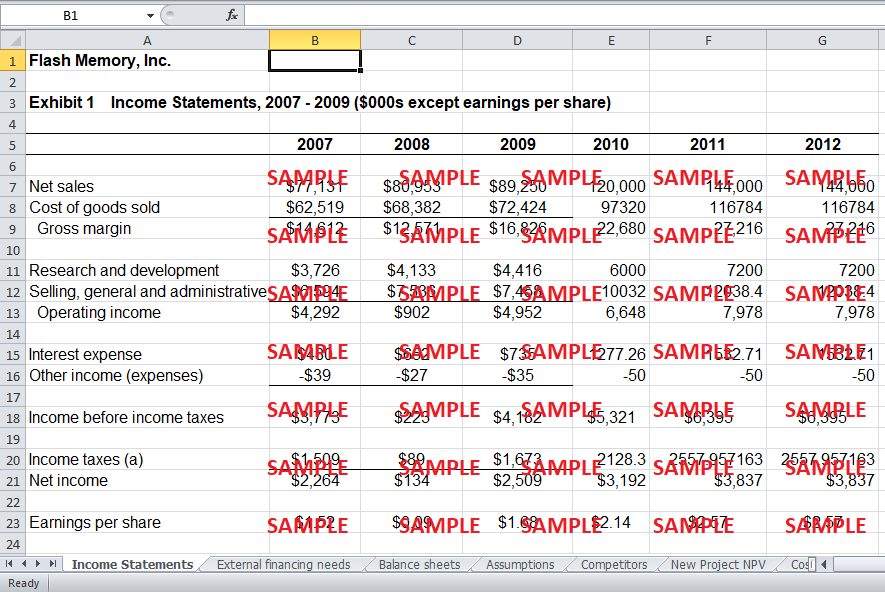 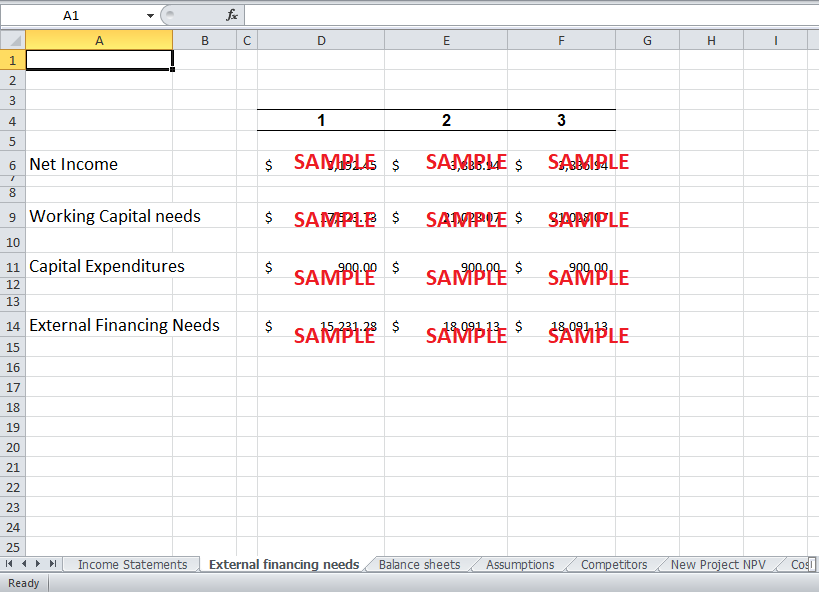 Interest expense for a particular year can be given by multiplying the cost of debt by the amount of notes payable outstanding at the beginning of that particular year. Although this will not be actual interest expense, but looking at the financial statements in the past, it can be safely assumed that such an estimate is very close to the actual values. Other expenses for next three years have been estimated to be $50,000 for next three years. Effective income tax for the company for next three years has been estimated to be 40%. Using all these values, Net income after taxes comes out to be $3,192 million, $3,837 million and $3,837 million for years 2010, 2011 and 2012 respectively.

Calculations for balance sheet items depend a lot on the estimates based upon which income statement has been calculated. The first item of the balance sheet, cash, has been estimated to be 3.3% of the net sales for all the three years. Accounts receivable had been estimated to be 60 days of sales outstanding. Using the formula for day’s sales outstanding, the accounts receivable of the company for three years can be calculated easily by multiplying 60/365 with sales. One very important assumption in these calculations is that all sales of the company will be credit sales for all the three years. Similarly, inventory will remain at 52 days of cost of goods sold while accounts payable will be 30 days of purchases for next three years. As far as calculations for notes payable are concerned, it has been estimated that the company will borrow funds from a commercial bank in a way that ending value of notes payable will be 70% of the accounts receivable for that year. Accrued expenses will remain 0.735 of the net sales for next three years. Income taxes will be paid in such a way that 10% of the income tax for that particular year will remain payable at the end of the year. The number of shares outstanding will remain the same and thus, the only change in the equity side of the balance sheets for the next three years will be the change in the amount of retained earnings. This change will be equal to the net income of the company for last year because the company will not pay a dividend.

2. Assume that the firm will issue equity if it decides to go ahead with the new project

a. Construct a table showing all the project cash flows from initial outlay to termination.

b. Calculate the NPV, IRR and Payback period for the project.

For the purpose of calculating the net present value of the project, an appropriate cost of capital has to be calculated at which free cash flows of the project should be discounted. Since the project will be solely financed by selling new shares, cost of equity will be used as the discount rate. Beta for the company can be assumed to be equal to average of the betas of the competitors of the company. This average beta value comes out to be 1.2. Risk free rate is 0.17% while risk premium has been estimated to be 6%. Thus by putting these values in CAPM formula, we can find the cost of equity for the company which is 7.39%.

Free cash flows of the project for next five years can be calculated by adding depreciation values and subtracting changes in working capital from net income. In 2010, there will be a cash outflow of $2.2 million as capital expenditure. In 2011, there will be an additional one time cash outflow of $300,000 as an advertising expense. Using net free cash flow values for next five years and discount rate for discounting, NPV for the project comes out to be $2907, 100. The rate of return at which net present value becomes zero i.e. IRR comes out to be 23%. This is a very high value even though cash flows of the project beyond 2015 have been ignored. This IRR value is much higher than the return on assets of the company and hence, inclusion of this project will increase the ROA of the company as a whole. In addition to the initial outflow of $2.2 million in 2010, the projects cash flow for year 2011 is also negative because of the extremely high change in working capital and one time advertising cost of $300,000. Therefore, these outflows of cash in first two years will be recovered by the cash inflows in next three years. Precisely, the payback period of the investment, as shown in excel sheet, comes out to be 3.436 years.

c. Should the company accept or reject this investment opportunity?