Foldrite furniture company needs to tackle the increased demand for the summer. For this reason, there are several options that Fodrite needs to consider. Not only the cost savings but other qualitative aspects of the options also need to be considered. Let's discuss the options one by one and compare them with each other. Before moving forward to the analysis of the situations, the amount of existing labor needs to be calculated. The following table depicts the computations. 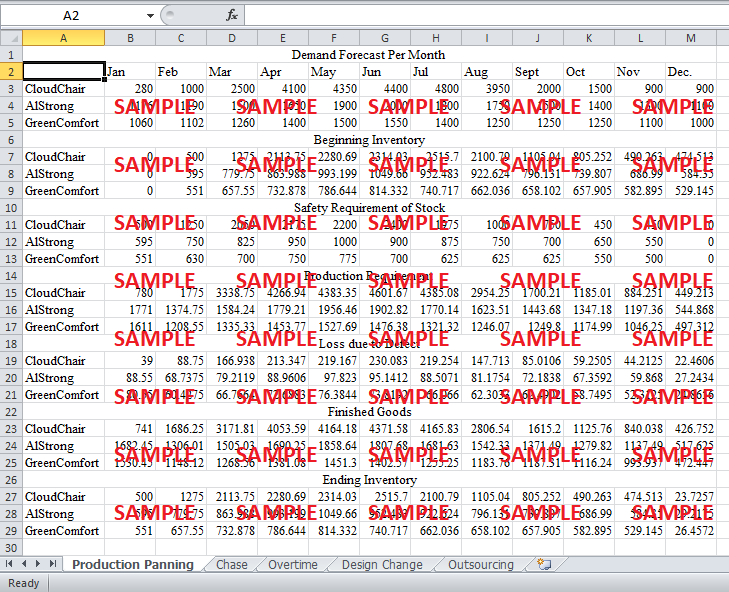 According to the first strategy, additional labour needs to be inducted into the company for catering to the seasonal demand. For this scenario, two types of costs are relevant. Firstly, the hiring costs of the skilled and unskilled employees. Secondly, the cost that the new employees will add. The analysis of the demand and current portion shows that in total 53 skilled and 187 unskilled workers need to be hired over the course of next six months. The additional labour will constitute hiring costs of $178,186. Additionally, they will also cost an additional $576,100 in salaries. Hence, in total, the cost of hired labour amounts to $754,287. There are a lot of risks associated with this strategy. When the demand will decrease in late summer, the new workers had to be laid off. Hence, the cost of hiring will essentially be lost. Also, the morale of employees will get lowered as their hiring and firing decisions correspond to the seasonal demand. The second strategy comprises of overtime working by the existing employees. In total, a single labour will add 10 overtime hours per week (40 hours per month). The demand for the first six months dictates that 56 additional skilled workers and 186 unskilled workers need to put up the overtime. The cost of overtime is higher than the standard cost. The total costs of overtime come out to be $636,461. The overtime strategy also includes many risks. The quality of work will decrease along with the profitability.

The design change only considers one brand, the cloud chair. Additionally, only the work done by the unskilled workers will be reduced. The time will be reduced by 1/60. Taking this figure into perspective, the savings from the labour costs stand at $11,177. The total cost of design change is $15000. It is quite probable that the design change will recover its cost in the coming years. Hence, the design change should be implemented because, in the long run, it will tend to generate a positive inflow to the company. The last options comprises of outsourcing the additional or excess demand. This case is quite similar to the scenario of overtime. However, there is a difference. In overtime, the excess demand was met by the labour force of the company while in this case, it is being met by external sources. The excess demand forecasts shows that the outsourcing will cost the firm a total of $653,691. Outsourcing denounces the motivation of labour and it also poses quality issues.