McCoy operates a dairy milk farm, in which he has a number of goats that produce milk, which he then sells it to local customers. He received an offer from a nearby resort who wished to rent goats for clearing a section on the property, which could not be cleared using machines due to the rugged terrain. Mc Coy was therefore faced with a decision whether to rent goats or not. This decision was based on the profitability it would generate for McCoy. 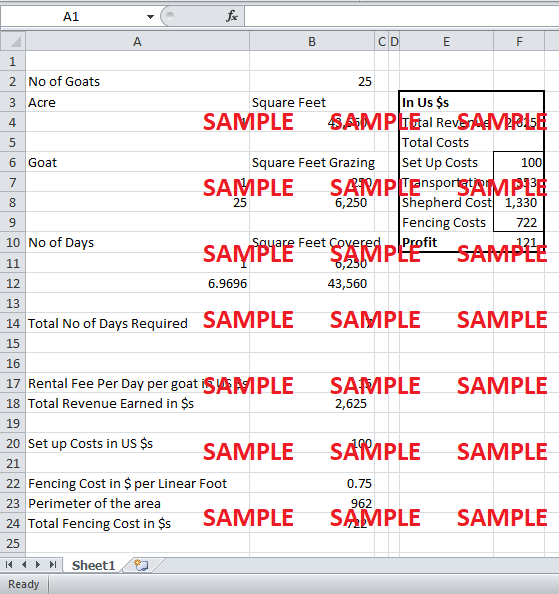 Case Analysis for Goats The Green Alternative A

The project expenses are as follows:

A total of 7 days has been calculated based on the area that will be required to cover and the number of goats that will be used to graze the area. The fixed expenses are fencing costs and shepherd costs that will have to be incurred irrespective. Mc Coy will have to incur these costs. The variable costs for the business would include forage and green mixture costs, which would be setup costs, vehicle maintenance costs since the working of the vehicle would increase, and the fuel costs, which would form a part of the transportation costs. The project expenses that have been calculated are as follows:

The total cost of the suggested job for the resort would, therefore, amount to $2,504, the breakup for which is as follows:

Based on the suggested price, it can be seen that the total revenue that would be generated by renting 25 goats on a $15 per day for 7 days would result in revenue of $2,625. Hence, the job will generate a profit of $121 as shown in the following table