AIFS is an American company that international exchange opportunities to both college and high school students. While the company’s revenues are generated in American Dollars (USD), a large proportion of their costs are incurred foreign currencies such as Euros (EUR) and British Pounds (GBP). Moreover, the company provides a guarantee that it will not change its prices that are announced in advance. Therefore, foreign exchange hedging is important to mitigate the currency risk of AIFS. The company has two alternatives to hedge its currency risk: forward contracts and currency options. The essay determines the approximate cost of each alternative and elaborates the reasons for the difference. A further attempt is made to outline the scenarios in which each alternative will be more advantageous. In the end, possible consequences of an increase or decrease in projected sales are outlined. 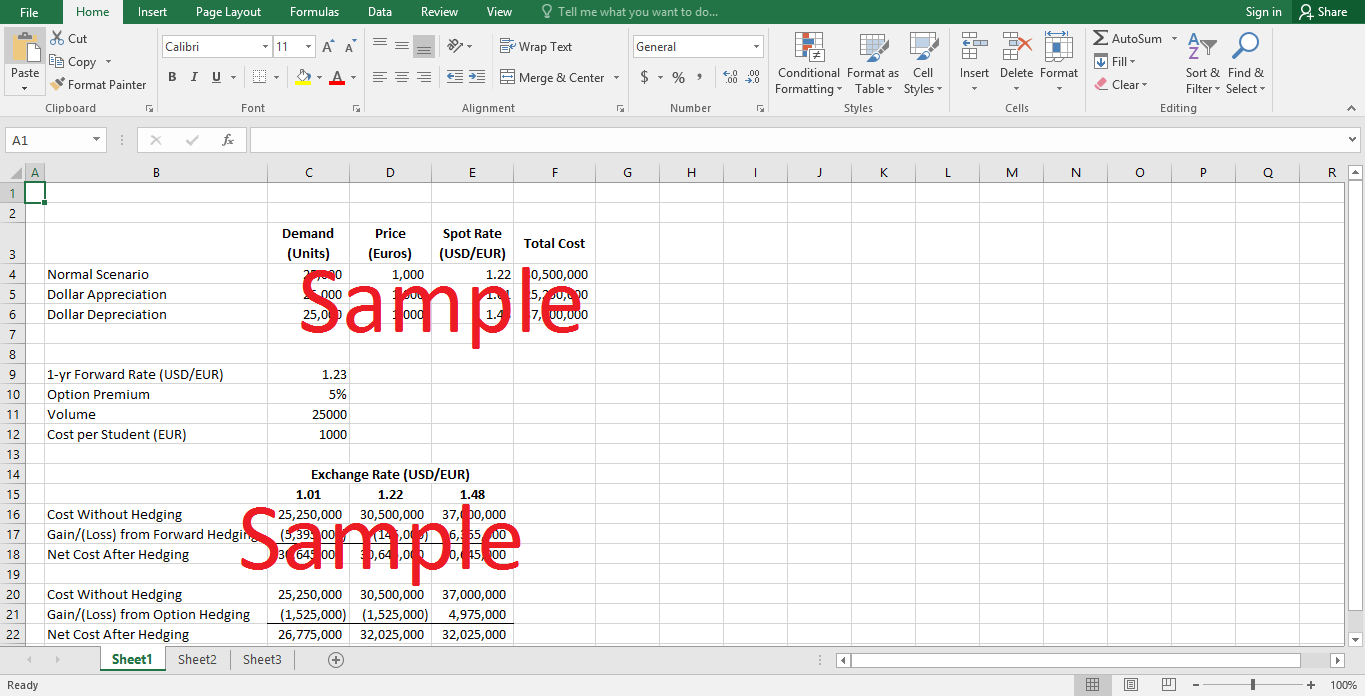 1. What gives rise to the currency exposure at AIFS?

The AIFS has two separate programs: a semester-long program for college students, and a similar program for high school students. These students are sent to various countries – including the UK and other European countries – to complete an educational or cultural exchange program. These students originate from the US and pay for the cost of the program is US dollars. Therefore, the revenues of AIFS are collected in the US dollars. On the other hand, a majority of the expenditure related to the program is incurred in the currency of the areas where they are sent. Thereby, for students that go to Europe, the costs are likely to be incurred in Pounds or Euros. Therefore, a change in the exchange rate between USD and GBP or between USD and EUR could lead to a mismatch between revenues and costs. For instant, a depreciation of US dollar relative to Pounds to Euros may lead to higher costs in US dollar terms. Moreover, the problem is further exacerbated by the fact that the company gives a guarantee that the prices will not change from the level previously announced. Since the option to adjust prices in response to exchange rate changes is not present, the company’s only recourse to minimize variations resulting from changes in exchange rate is to hedge its foreign currency risk.

2. What would happen if Archer-Lock and Tabaczynski did not hedge at all?

If the company does not involve in hedging, it will be exposed to foreign currency risk – the unexpected movements in foreign currencies. The cost for the exchange students is incurred in foreign currencies such as Pounds and Euros while the revenues are generated in US dollars. A depreciation of the local currency will lead to higher cost in local currency terms, while an appreciation of the local currency will lead to lower cost in local currency terms. Therefore, the net effect of an unhedged position could be both positive and negative. While these exchange rate gains and losses may cancel each other over long-term, the short-term variations in profits may not be desirable. To determine the magnitude of the change in cost that can be caused by fluctuations in exchange rate, let us look at the data provided in the case.

Under the current scenario, where the demand is for 25000 students and the spot rate is USD 1.22 / EUR, the total cost incurred by the company is expected to be $30.5 million. If the currency risk in not hedged, exchange rate appreciation to USD 1.01 /EUR could decrease the dollar cost to $25.25 million. On the other hand, exchange rate depreciation to USD 1.48 / EUR could increase the cost to $37 million.

3. What would happen with a 100% hedge with forwards? A100% hedge with options? Use the forecast final sales volume of 25,000 and analyze the possible outcomes relative to the ‘zero impact’ scenario described in the case?

4. What happens if sales volumes are lower or higher than expected as outlined at the end of the case?

If the sales are different from expected, the optimum hedging strategy will depend on the direction that exchange rates take. If the sales turn out to be lower lower and the exchange rate also appreciate, the forward contract can magnify the impact by costing extra money for the company. The currency options will be more suited in this case because the company can choose against exercising the out-of-money options. However, if the sales are lower and the exchange rate depreciates, the company might be able to reap greater benefits from the forward contract because they are cheaper than the currency options.