The two division of Humana – Health Plan and Hospitals – are growing increasingly divergent with the passage of time. Although the company has not fallen into any trouble, there are clear signs that the company’s performance is deteriorating. The company has suffered has received some negative publicity and conflicts of interests regarding the inter-company transaction between the two business segments. The company has identified some potent alternatives to address its problems. It is believed that the spin off option is the most effective of those options. The company’s business segments have been independently valued using the multiples as well as the discounted value approach. It is believed that the spinoff would add considerable value to the company. It is, therefore, recommended that the company proceeds with the spin-off option. 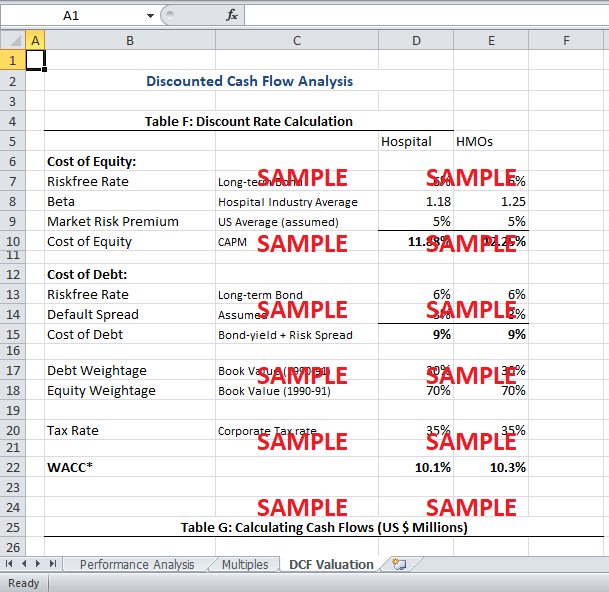 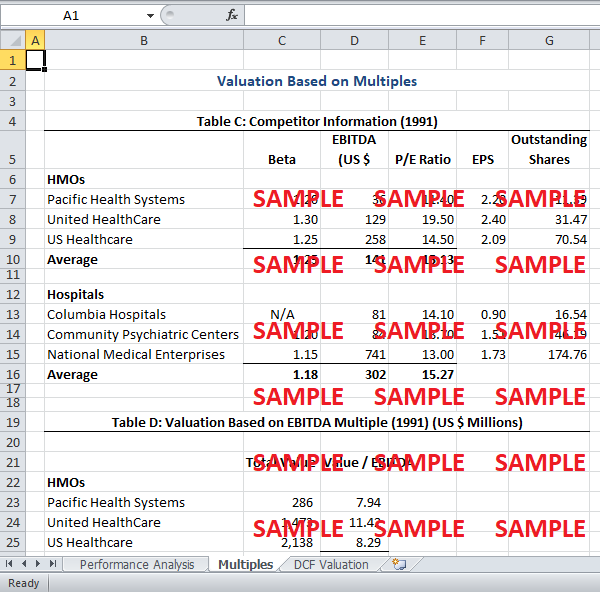 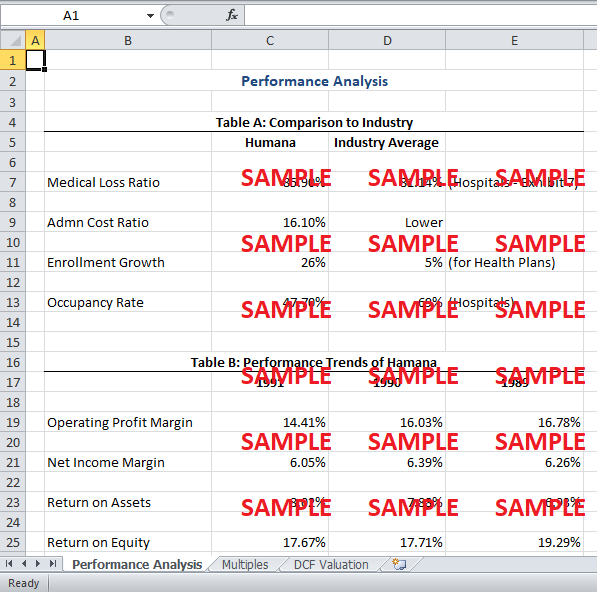 Case Analysis for Humana Inc. Managing in a Changing Industry

The hospital division was the older business segment of Humana. The company had started its operations with medical clinics and expanded into the hospitals business as it offered greater returns. The company currently operated 78 hospitals across USA, as well as 3 overseas hospitals. The changing health sector in the United States has reduced the potential profits from the hospital sector as hospital occupancy rates decrease. In order to attract more patients to its hospitals, Humana expanded into providing health plans through HMOs and PPOs – health maintenance organizations and preferred provider organizations.

The health plans section of the company became a huge success and produced high profits. On the other hand, the hospital section was struggling. At the end of 1991, the health plan industry had a price multiple (price to earnings ratio) of 26 times, while Humana’s price multiple of 10 times was more reflective of the hospital industry. It was believed that the hospital business was inhibiting the growth of the health plans business. Humana had initiated the health plan segment with a view to feed patients into its hospitals. However, recent results indicated that the two business segments were growing increasingly divergent and an integrated strategy might prove to be detrimental to both the businesses. The integrated strategy had also invited some disapproval from physicians over the favorable rates charged between the two segments at the expense of the physicians. This had led to bad publicity for the business. The operating ratios had also taken a dent and the complex nature of the transactions between the differing business segments could be seen as one of the reasons. The company was, therefore, considering a number of options to solve the problem. A spin-off of the hospitals business into an independent, new company appeared to be the options favored by management.

There is no doubt that the hospital industry has suffered a set-back in the recent year. The main reason for the decrease in profitability could be seen as Medicare patients. In 1991, 60% of US hospitals operated at a loss on their Medicare patients. The ageing population meant that the future was not very promising, and there was an apprehension that they government might decrease its expenditure on Medicare. Similarly, the occupancy rates were dwindling, and it was estimated that one-third of the hospitals would need to be closed within the next five years. Therefore, the worsening profitability of Humana hospitals was to be expected in a declining industry. However, it would be critical to determine how the company was performing relative to its peers.

The attached spreadsheet contains a performance analysis for Humana. Table A present a comparison of Humana Hospitals to its competitors within the United States. It can be seen that the hospital business was not doing so well relative to industry. The expenses for the hospital segment were soaring. The administrative cost ratio of 16.1% was higher than the industry. Similarly, the medical loss ratio for Humana hospitals was the second highest amongst its competitors – at 85.9%. It had grown from 84.4% only a year earlier – this was indicative of worsening performance. The occupancy rates, which are indicative of operating efficiency, for the hospitals were also significantly lower than the industry average. On the other hand, the health plans segment was experience massive growth where the HMOs had grown at 26% compared to the industry average of 5%. For the next five years, HMOs were expected to continue growing at a higher rate - between 6% and 10% - than industry average.

Due to its declining profitability, it is no surprise that the return on equity for the company has declined over the past three years. This explains the decline in the company’s stock prices, as shown is exhibit 1 of the case study. The company has not done well in terms of liquidity either. The current ratio of the company has declined over the past three years, and is barely over 1 – the minimum required level of liquidity. The quick ratio is a stricter version of current ratio that removes the effect of illiquid current assets (like inventory) from the calculations. The quick ratio was at the safe level of above 1 in 1989, but it has decreased to a potentially dangerous level of 0.86 for the past two years. A ratio lower than 1 implies that the company is unable to meet its short-term obligation through its liquid assets, and may have to resort to expensive borrowing or liquidation of assets to meet its financial obligations. The company has also reduced its long-term debt to about 30% over the past three years. This may not be a bad thing if the company wants to engage in a spin-off, as the restructured company might be able to issue cheaper debt. However, the profitability and the liquidity of the company are showing worsening trends, and it is important that the company make some changes before the current hiccups translate into major problems.

The management is certain that the integrated strategy can no longer work for the company. Such a view may be disputed given that the integrated strategy has worked quite well for Kaiser Permanente. However, Kaiser is a much smaller organization that operates in a small geographic area (California). Kaiser has also specialized its hospital operations by dealing exclusively with its health plan segment. The physicians of Kaiser are employed by the company – this eliminates any conflict of interests. The integrated strategy had worked quite well for Humana too. It was only until they started growing that the businesses grew divergent as other parties came into the equation. This is not the case for Kaiser, which has concentrated on inter-segment transactions.

Therefore, it is apparent that Kaiser’s situation does not apply to Humana, and the management may be right to propose a change in its operating strategy. However, besides the spin-off alternative, there are many other options on the table that need to be considered. One of the options is to issue targeted stock for the two business segments. This might mitigate the valuation problem as the targeted stock would represent separate claims on the cash flows from the two business segments. However, the businesses would remain integrated under the same management structure. Therefore, such an option might not resolve the conflicts between the business segments or control inflating expenses.

The alternative option to implement more competitive price and remove conflict with physician may not solve the problem of diseconomies resulting from integration of the increasingly divergent business segments. Similarly, any of the options that propose the integrated approach suffer from the same drawback – the combines operations lack synergies because the business segments have grown divergent. Moreover, the options of selling unprofitable hospitals and leverage buyout are also deemed unfavorable because of the ensuing government regulations. The option of buying back shares of the company to address the problem of the low debt-to-capital ratio makes sense, but it does not address the problems of soaring expenses and decreasing profitability. It is clear that the main problem of the company lies in its integrated approach. The health plan and hospitals business have diverged into separate line of businesses and it no longer makes sense to group them together. Therefore, the spin-off option makes the most sense.

It is obvious that the Health Plan segment promise high opportunities for growth. However, in its current structure, it would continue to be overshadowed by the Hospital business. The Hospital business has reached its maturity and no longer offers high opportunities for growth. Therefore, the company is right to dissociate from the Hospital segment, and associate its name – Humana – with the Health Plan segment. Thereby, the publicly traded price of Humana would reflect the Health Plan business, while the Hospital business would be traded under a separate name. The industry multiples data provided in the case indicates that the added value from extrication the two business segments could be substantial. The attached spreadsheet attempts to value the separate business segments through two different approaches: the multiples approach and the discounted cash flow (DCF) approach.

The multiples data for the competitors can be obtained from Exhibit 5 of the case study. Table C in the attached spreadsheet summarizes the data that is relevant for multiples analysis. The table contains the earnings before interest, taxes, depreciation, and amortization (EBITDA) for the competitors. The value of each of the competitors can be estimated through multiplying the Price to Earnings (P/E) ratios by the earnings per share, and multiplying the result by the number of shares outstanding. The value for each competitor can be divided by the respective EBITDA to obtain the relevant EBITDA multiple. The average EBITDA multiples for the competitors can be multiplied by that EBITDA of Humana to get the value of Humana. Table D in the attached spreadsheet details this process. Separate EBITDA multiples have been calculated for HMOs and Hospital segments. The EBITDA break-up for the two segments of Humana can be obtained from Exhibit 10. The negative EBITDA for the common corporate overheads has been allocated between HMOs and Hospitals segment on the basis of their revenues. Using the EBITDA multiple, the hospital segment has been valued at $6.26 billion, while the HMOs segment has been valued at $396 million.