The case suggests that Husky did not have any proper marketing and sales plan while developing the business strategy. Husky only depended on the customer’s word of mouth and high quality of its products. Husky failed to brand its product or conduct advertising of any kind. The company failed to pay any particular attention to the marketing of business. To create awareness of the Husky brand, the company could have launched an extensive brand promotion strategy to create awareness about the quality products that it offers. For instance, Husky could have opted for Above the Line strategy for mass marketing, which includes billboards, running television campaigns and print marketing. Husky should have recruited expert market professionals who would develop brand and marketing strategies to reinforce the basic focus of Husky in the industry which was quality. 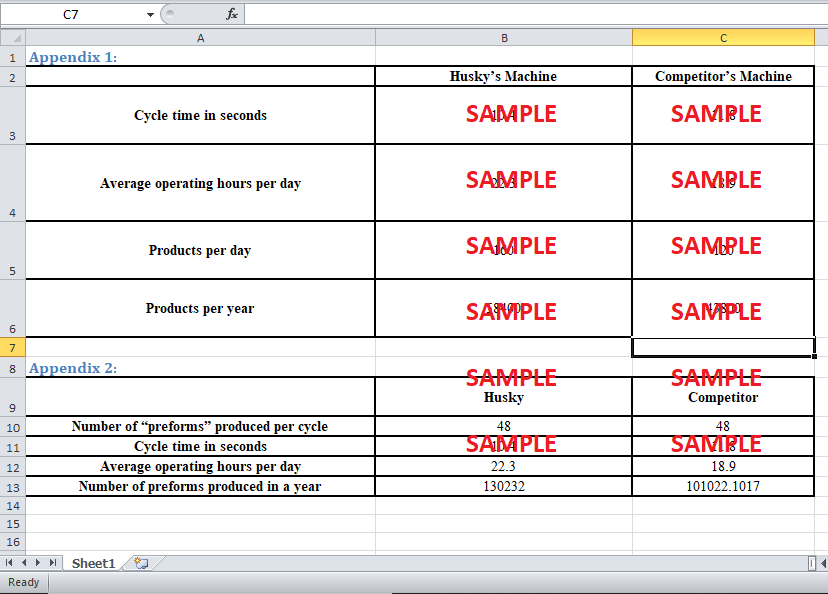 Husky Injection Molding Limited is a company based in Canada founded in the year 1953. The core function of the company is to supply injection molding systems to the plastic industry worldwide. The company’s clientele is based in more than 100 countries with approximately 41 sales and services offices globally. The company mainly caters to the American, European and Asian markets. It has diverse machinery facilities ranging from medium tonnage machines, molds to robotics. Husky has a major share in four market segments which are:

Husky is considered to be the global market leader in manufacturing of injection molding systems for PET. It has a market share of 50% in this market. According to the case given, Husky’s sales figure for the year 1995 were an astonishing $608.7 million. There were 1700 employees working directly or indirectly with Husky.

Husky’s main focus has been to offer products at premium quality. For premium quality, Husky has been charging a premium price from its customers. Husky’s main strategy was to provide high quality products to its end customer. For this purpose, Husky had invested huge money in installing efficient and high technology machines in its factory facilities. Husky’s management has been mainly focusing on product differentiation, for this the main concern of Husky has been to pay extra attention to every detail and to ensure extreme high quality in each of their products. Husky was one of the early entrants in the plastic industry; therefore Husky had a competitive edge over its competitors. Husky has been dependent on its quality reputation in the market to survive. During the early 90’s, Husky enjoyed the prime of its business. In terms of sales, its sales increased fourfold during the years 1992 and 1995. During the same time, Husky appreciated return on equity as high as 40%. The main product behind the success of Husky was PET and Husky also considered PET the most lucrative product. Husky had high tech and well advanced machinery in its factory floors which gave a competitive advantage. Husky was able to manufacture products with thinner walls at a faster rate than its competitors. The cost was also lower than the cost afforded by the competitors. All in all, low raw material costs, premium quality products and well reputed brand name have guided Husky to be a success in the industry. However, the dimension of the market was changing, and there was strong challenged showed by the competitors. Husky had no longer the option to stick to its current strategy. To thrive successfully in the industry, Husky had to come up with a better strategy to overcome its competitors.

3. Comparison of Husky and Its Competitors

The information given in the case under Exhibit 6 suggests that Husky charges a premium price of $200,000 for its products higher than other manufacturers in the industry. To further comment on the premium pricing strategy of Husky, it is necessary to analyze if the premium price charged by husky is justified.

The information given in the case, according to the calculations based on the quantity of products manufactured by Husky and its competitors during one year with the facilities installed by competitors and Husky. It is evidently observed that Husky produces 160 PET units per day and approximately 58400 units per year. On the other hand, the competitors in the market produce 120 PET units per day and 43800 units per year approximately (Appendix 1). Therefore, Husky Limited manages to produce 14824 units of PET products more than its competitors. The large amount of manufacturing every year reduces the overall cost of production for Husky. However, Husky is able to charge a premium price because of the maintained quality at such low costs.

Similarly, the data and information given in the case, Husky is able to produce 135241K units of “performs” as compared to its competitors, which are only able to produce 101022K units of “performs” (Appendix 2). Therefore, Husky can save immensely on electricity, as well as, on the cost of producing “performs”. The reason for such a huge amount of savings by Husky is because Husky has installed more efficient machines than its competitors. Moreover, the machines do not cover up a big portion of floor space in the factory. This helps Husky to install more machines than its competitors. Similarly, the machines consume lesser amount of electricity, raw material usage and capital expenditure per amount which results in a great amount of cost savings overall. It is clear that the cost saving experienced by Husky is entirely based upon the output produced by Husky. Another assumption taken to calculate the figures for the analysis is that Husky operates its machines at their full capacity throughout the year.

There are two main reasons identified in the case which were the cause of the difficulties faced by Husky. The problems are: