The relevant stock price table lists out the calculated prices given a range of exit multiples and discount rates or WACC. Three cash flow exit multiples are used in the table (14x, 15x and 16x). At the same time, the discount rate which in essence is the implied WACC of Interco ranges from 10% to 14%. As a result of these assumptions, twelve different prices are obtained. The starting point of the calculations incorporates the formulation of free cash flows for the next ten years. Free cash flow can be computed by inputting the following formula: 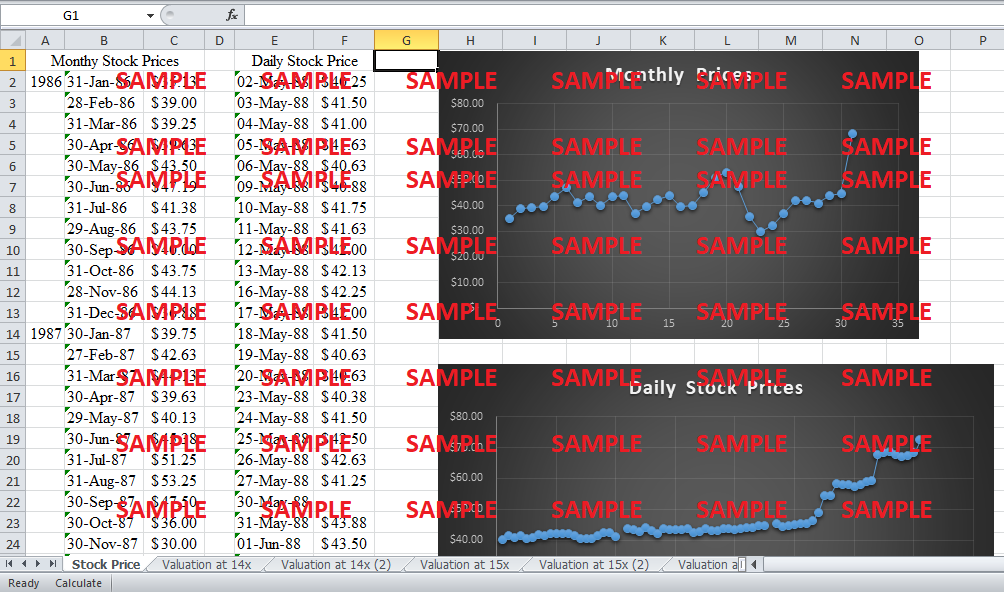 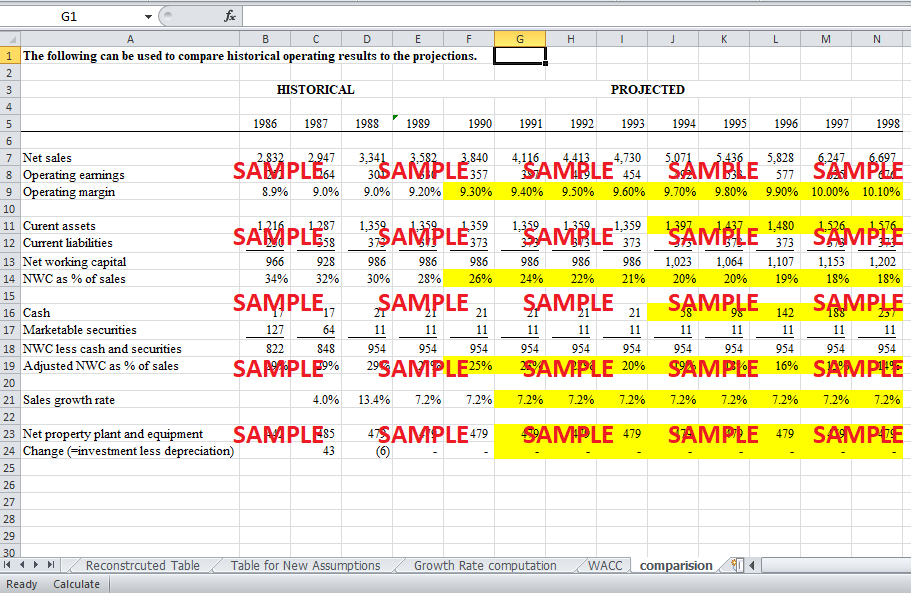 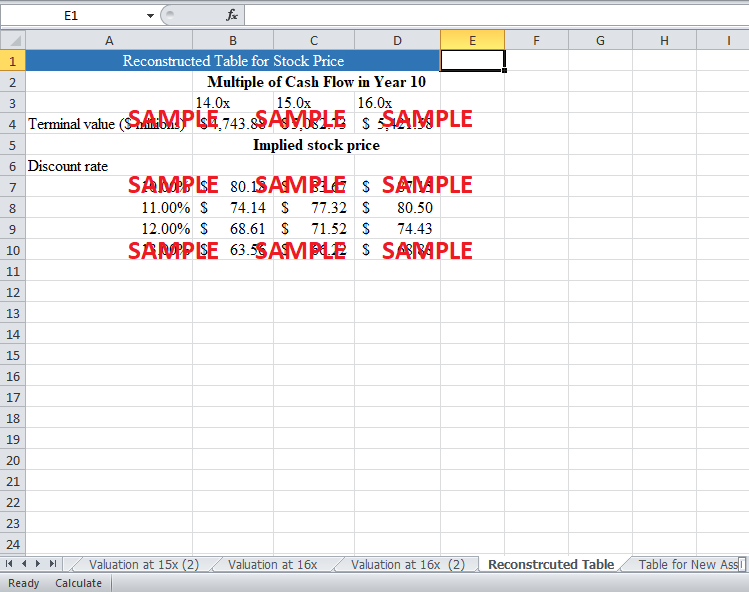 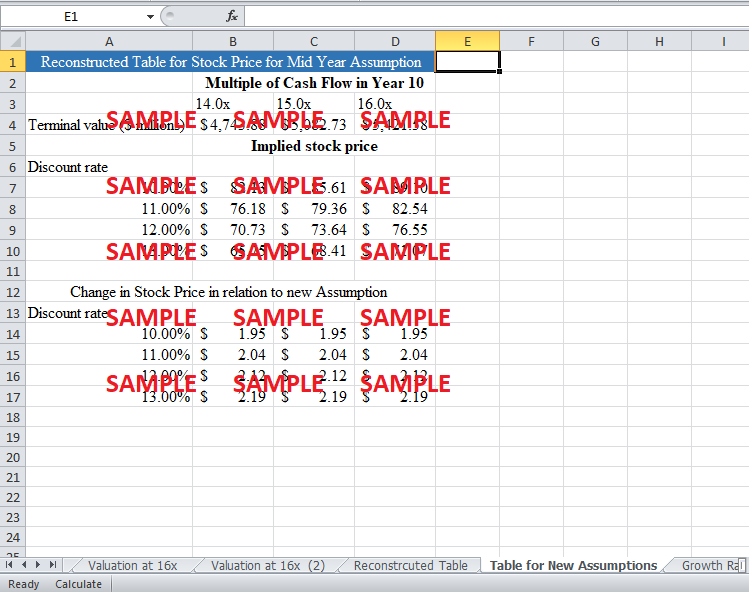 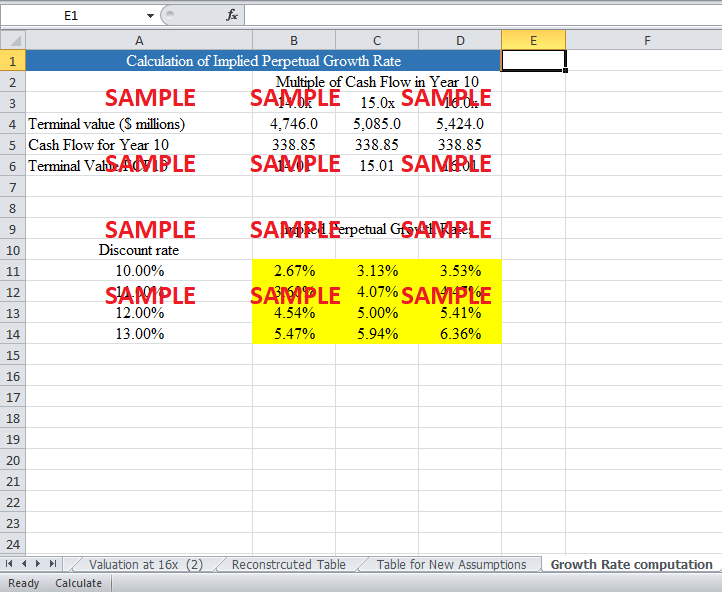 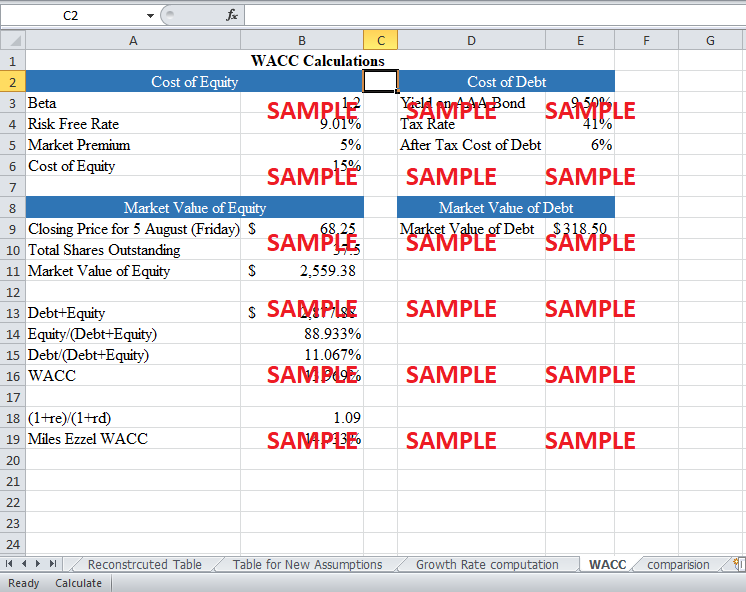 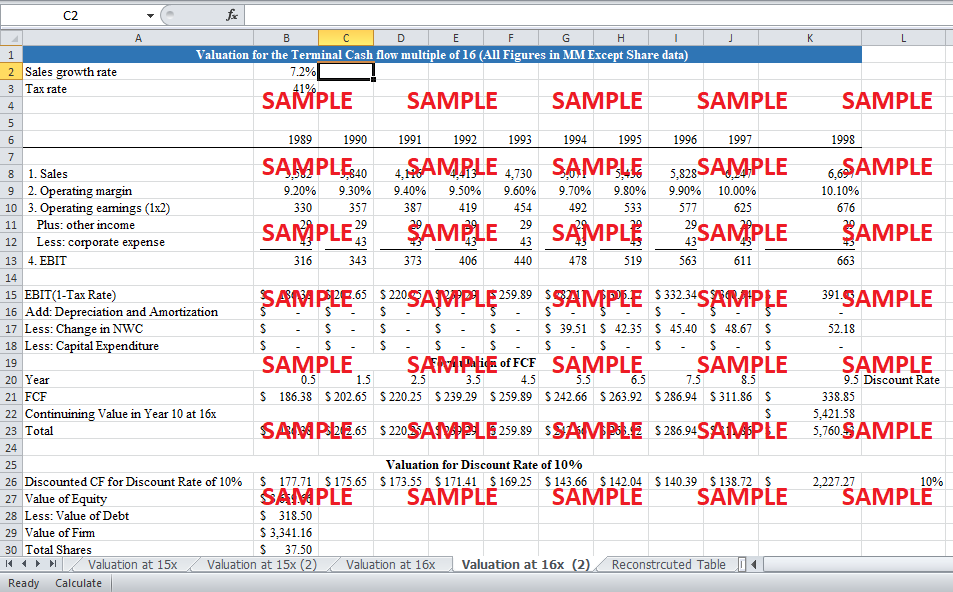 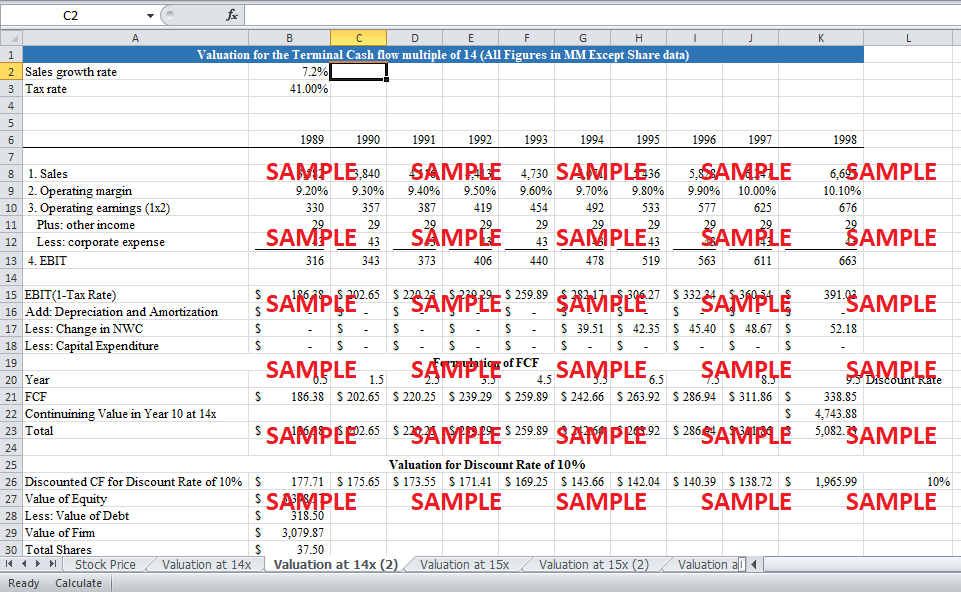 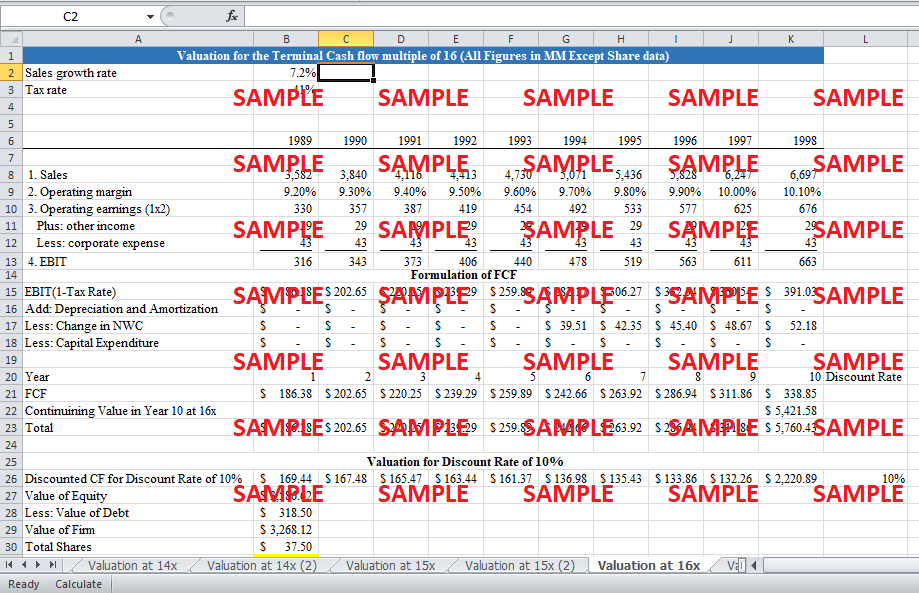 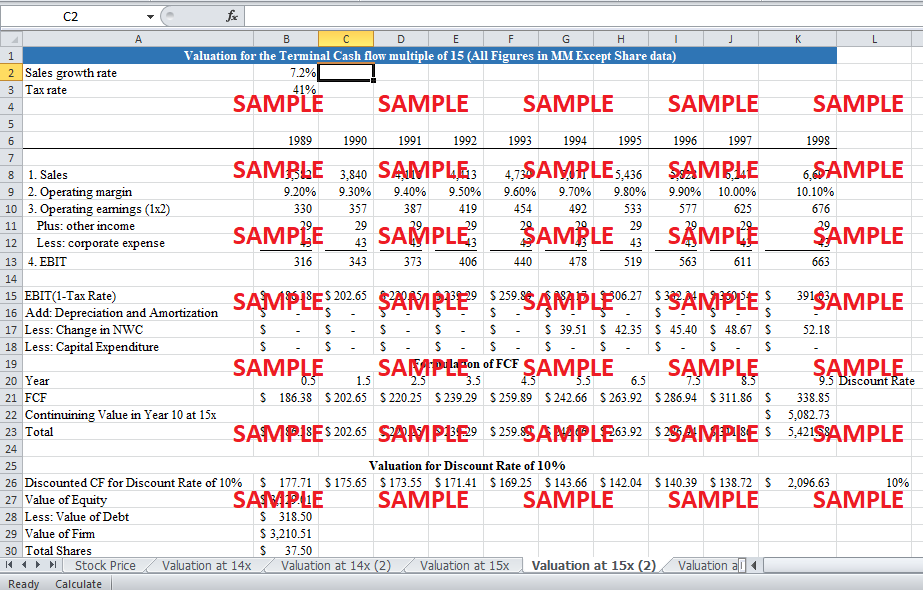 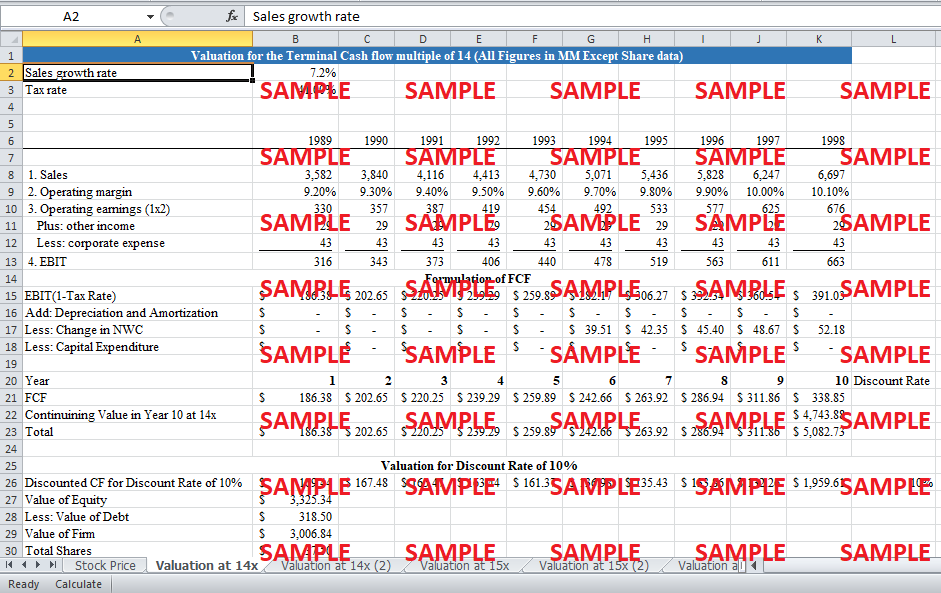 The EBIT is calculated by applying the following accounting equation:

In the current case, the sales are projected to grow at a consistent annual rate of 7.2% for the span of next ten years. One of the most critical assumptions or information alters the nature of FCF calculations to a large extent. The capital investment or the capital expenditure is projected or assumed to be equal to the depreciation. A close look at the formula reveals that the prescribed nature of the relationship cancels out the two terms (+ depreciation and - capital expenditure). Hence, the FCF formula essentially reduces to the following format.

The terminal cash flow is calculated by equaling it to the relevant cash flow exit multiple.

Practically, the cash flow does not simply pop out at the end of the fiscal year. The year-end value represents the cash flows that are attained throughout the year. Hence, using the year-end discounting is not a suitable task. Ideally, the cash flows should be discounted by the mid-year connotation because this step smooth out the time differences rooted from the monthly cash flows. Hence, for year 1, the discounting factor of 0.5 should be applied as it rightfully represents the mid-year discounting. Similarly, for year 2, the relevant value of 1.5 should be applied and so forth. However, the instance of exit multiple does not follow the same rule. The exit multiple occurs at the end of the 10th year. Therefore; it should be discounted separately from the 10th-year cash flow. The terminal value should be discounted with a factor of 10 while the 10th-year cash flow should incorporate 9.5 as the relevant factor. In this scenario, the present value of the individual cash flow increases as now the discounted factories closer to the starting point of the timeline. Hence, as a result of an increase in the present value of cash flows, the stock price increases. The following four tables show the calculations of stock price under the assumption of mid-year discounting. Note that the proposition of increase in the stock price is confirmed by the calculations.