Invast Precision Products engages in the casting business. The company is facing strong growth prospects. It has historically employed an ineffective capital budgeting process, but is looking to remodel its capital budgeting around the more relevant net present value approach. The company is considering six different projects under the current period and has a shortage of funds. It may not be possible for Invast to arrange equity and debt financing, which limits the company to internally generated funds. The company is at a crucial point and faces good opportunities for investment that are in line with its growth prospects. Therefore, it is recommended that the company sell its land investment to free up more funds for its capital budgeting projects. The net present value for four projects have already been calculated and we calculate the net present values for the two remaining projects. The projects are sorted in terms of their profitability index where the projects with high profitability index should be preferred as they generate the most return, relative to their initial investment. The company should not accept any investment that has a negative NPV. It is recommended that the company should undertake the platforms and sand blaster projects in any case. The company should also accept the broach project if it is found that it generates a positive NPV when all of the relevant cash flows are considered. If the company is able to sell its Hawaiian land, the company should use those funds to finance its casting renovation project as well as the land acquisition project. 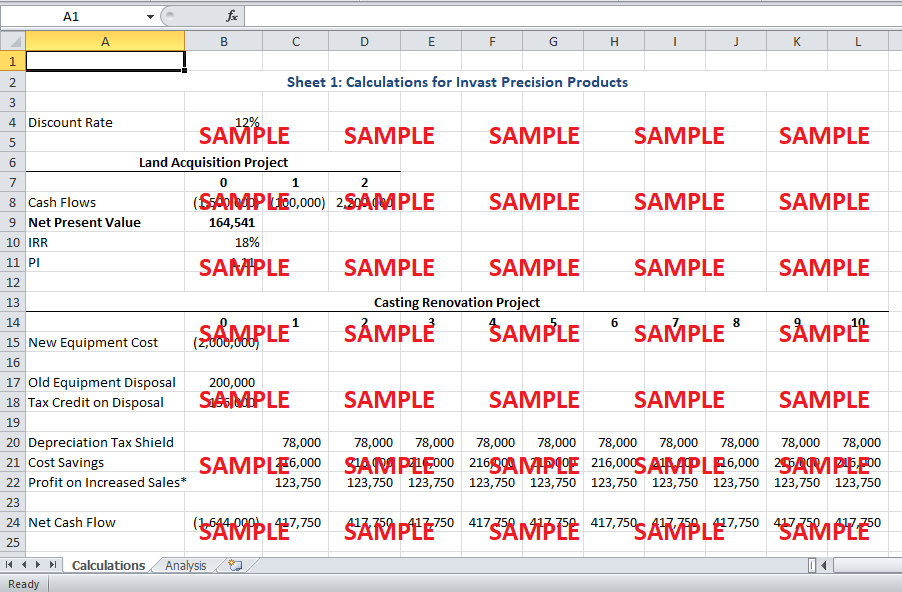 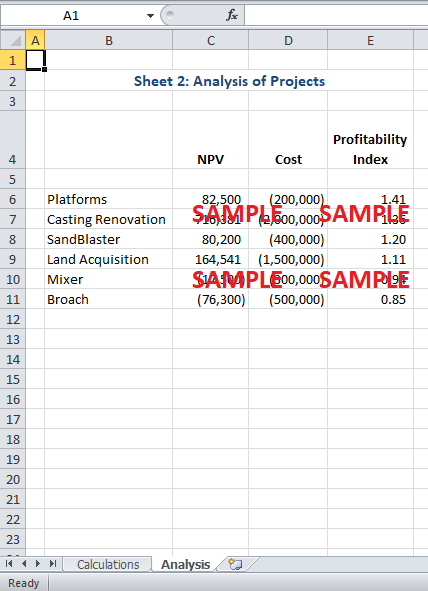 Invast Precision is involved in the casting business. A privately owned company, Invast Precision has grown at a significant rate. The growth estimates are as high as 15%, while another analyst estimates that the company is expected to grow at 9% for the foreseeable future. The company insiders believe that such growth is likely to continue for at least another 15 years. The company has received many project proposals on the pretext of its strong growth. Currently, the company has about six capital budgeting projects that it can undertake. However, the company does not employ an effective capital budgeting procedure in order to evaluate these projects. Presently, Invast evaluates its capital budgeting projects on the basis of its payback period and average ten-year return on capital employed (ROCE). The company has realized that both these methods have serious drawbacks and wants to evaluate its current projects based on a superior investment appraisal technique – the net present value approach. The company has already calculated the NPVs for four of its project proposals. However, the two recently proposed projects are yet to be evaluated. The company also faces a stringent capital constraint and there is some uncertainty regarding the appropriate discount rate for the net present value calculations.

Invast Precision had about $1.2 million available for investment projects. The required initial investments for the six projects far exceeded the available capital budget. In fact, the required investment for the two new capital projects alone exceeded $1.2 million. It was clear that the company would have to arrange for more financing if it wanted to undertake these projects. However, the two other sources of financing – debt and equity – were not readily available. The company already had a high debt ratio and the chairman of the company – Mr. Gruber – believed that further debt would put a strain on the company’s cash flows. Mr. Gruber was not in favor of equity financing either, as it would dilute his 20% stock ownership. Moreover, it was believed that the company’s stock price was undervalued. Therefore, the timing was not appropriate for an equity issue. However, the company had invested in a land property for speculation (investment) purposes. The Hawaii acreage, held by the company, could be sold for $3.5 million and this money could be used to finance the projects. It is believed that the projects under consideration are vital to the growth and operative effectiveness of the company. Therefore, the company should make every effort to ensure that the projects that are important to the strategic interest of the company as well as the projects that create substantial value for the company be accepted. The Hawaiian land owned by the company is not related to the core business of Invast Precision Products. Unless the company hopes to realize a substantial gain on the land in the near future, the company should not lock its money in the property while its core business suffers. Therefore, it is recommended that the company sell the Hawaii acreage for $3.5 million – its realizable value – in order to raise funds for its capital budgeting projects. The analysis and recommendations presented in the following sections will assume that Invast Precision will sell the land and will have a total budget of $4.7 million for its capital budgeting projects.

The cash flows associated with the land acquisition projects are fairly simple. The company has to invest $1.5 million right now and then develop the land for another $100,000 after one year. In the second year following the acquisition of loan, the company can expect to sell it for $2.2 million. The main problem arises when selecting the appropriate discount rate to discount these cash flows. It is mentioned in the case that the interest rate on a new debt issue would be around 10%. It is reasonable to assume that the required return on equity will be higher than 10% since equity holders face a higher risk than debt holders do. Therefore, the assertion that the company’s overall discount rate is around 10% may biased downwards. Taking a conservative approach, the appropriate discount rate has been assumed equal to 12% – 2% higher than the rate suggested in the case study.

The cash flows for the casting renovation project span over a longer period of ten years. This is a replacement project where older machinery will be replaced by new machinery. The benefits from the new machinery will be realized in the form of cost savings and higher sales. The new machinery will also provide a tax advantage through higher depreciation, which is a tax-deductible expense. The initial investment required for the project is $2 million, which is the cost of the machinery that is required to be purchased. The cost impact is slightly dampened by the sale of old machinery, which is expected to generate 200,000. The proceeds from the old machinery are expected to be lower than the book value of the machinery. Therefore, the sale of old machinery will also generate a tax credit on the difference between the book value and proceeds from disposal of the machinery. It is assumed that the company will be able to realize the tax credit in the same year in which the machinery is sold – that is year 0. This leads to a net cash outflow of $1.644 million at the beginning of the project. This calculation and the subsequent cash flow calculations related to the project are detailed in Sheet 1 of the attached spreadsheet. For the subsequent years, the benefits received from the project are calculated.

In each of the years from 1 to 10, the cash inflows fall into three categories: the tax shields generated by additional depreciation, the cost savings realized from the operation of new machinery, and the profit on increased sales. The depreciation tax shield is calculated by subtracting the depreciation of the old machinery from the depreciation on the new machinery. The balance is then multiplied by the tax rate of the company. This resulting amount is recognized as an inflow because it represents the amount that the company does not have to pay because of the additional depreciation on the new machinery. The cost savings on the new machinery are provided in the case study. These savings are adjusted for the tax rates to obtain the after-tax cost savings. The profit on increased sales in calculated by multiplying the additional sales from the 25% added capacity by the return on sales. It is assumed that the demand will be sufficient for the company to sell the additional output. Moreover, it is assumed that the 9% return on sales, mentioned in the case study, is on after-tax basis.

The two projects outlined above have a positive net present value. This means that the company might be better-off undertaking it. However, the company is operating under a restrictive capital budget and has four other projects to consider as well. Sheet 2 in the attached spreadsheet summarizes the details of the six projects under a 12% discount rate. For independent projects, the profitability index is a useful tool when the capital budget of a company is limited. The profitability index can be used to rank projects that add the most value relative to their required investment. The projects in Sheet 2 have been listed in the order of higher to lower profitability index. A profitability index of less than 1 indicates a negative NPV projects. Therefore, the Mixer and Broach projects should not be accepted as they have negative NPVs. However, the calculations for the Broach project have not been performed correctly. The incremental cash flows for the project should include all the cash flows associated with the project since the old machinery is no longer operative. The net present value of the Broach project might be positive if all the cash flows are taken into account. Even if the NPV is negative, it might be in the strategic interests of the company to undertake the Broach project as the company might not want to discontinue that line of business.

If the company sells the Hawaii acreage and has $4.7 million available for investment, it can undertake all of its positive NPV projects – that is platforms, casting renovation, sand blaster, and land acquisition project. It can be argued that the land acquisition project is not related to the core business of the company, but it might be a good way to invest the surplus funds in the absence of any other positive NPV projects. These four projects constitute a total cash outflow of $4.1 million. This means that the company still has enough funds left to finance the broach project if it has a positive NPV (when considering all cash flows).