The purchase of paint mixing machines to reduce labor costs would result in payback, net present value and IRR of 7 years, ($ 844.35) and 11.49% respectively. Payback of 7 years is a positive indicator considering the company would recover back its initial investment in the approximate half-life of the project (Total life of the project is 15 years). IRR results, however, indicate that management should not go ahead with the project as 11.49% is less than the weighted average cost of capital (WACC) of the project that is 12% and hence the thumb rule that for a project to be selected, IRR should be greater than WACC is not satisfied. NPV calculation is also in contradiction to what payback suggests. It shows that the project would adversely affect the shareholder’s wealth and add a negative value of $844.35 to the company. 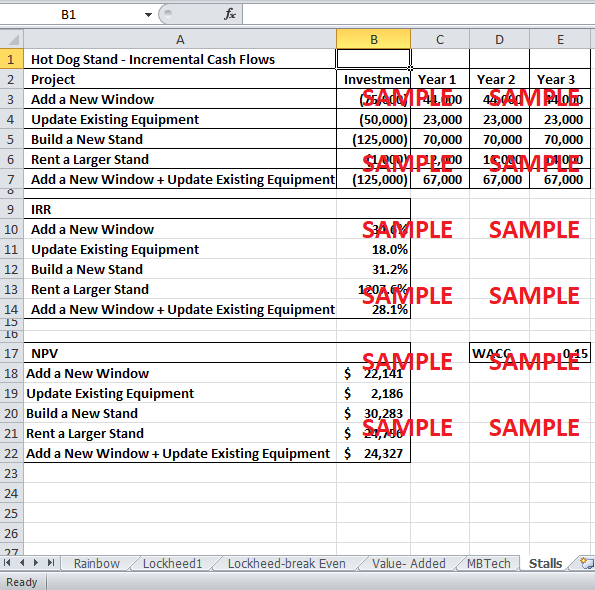 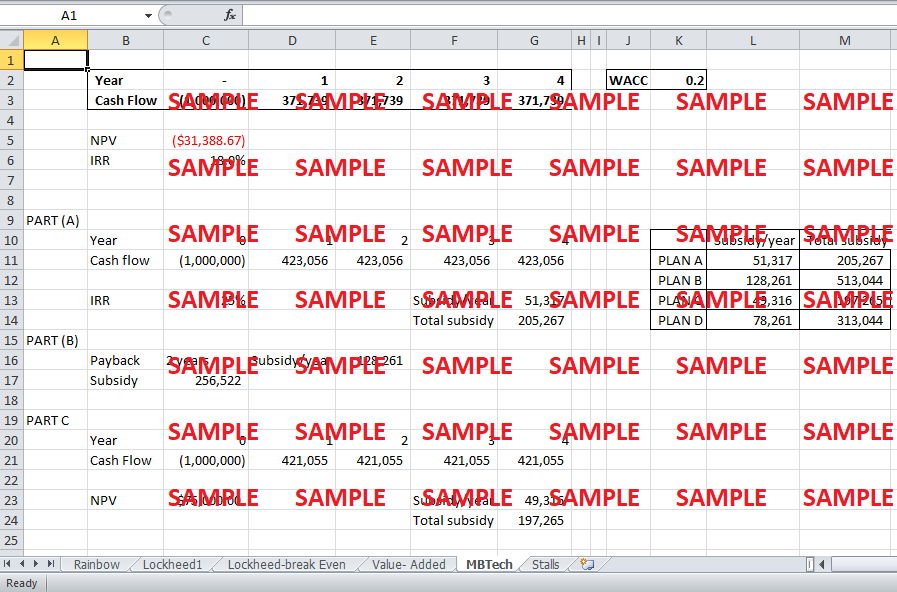 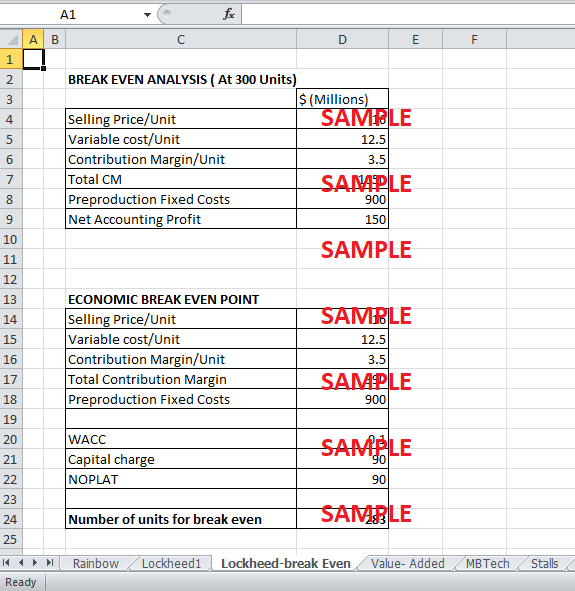 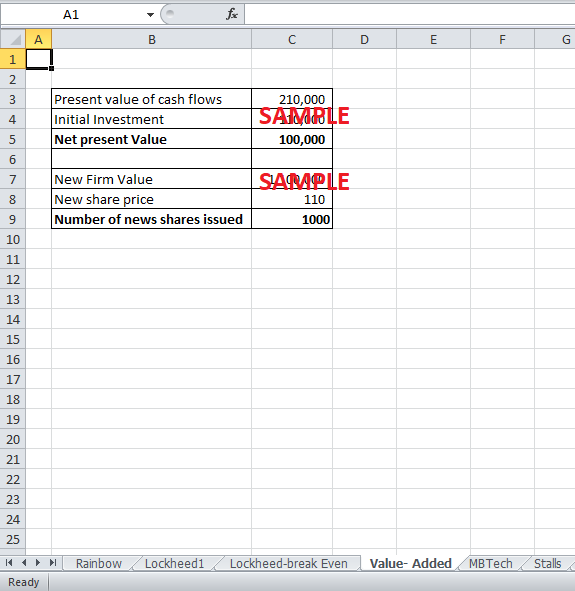 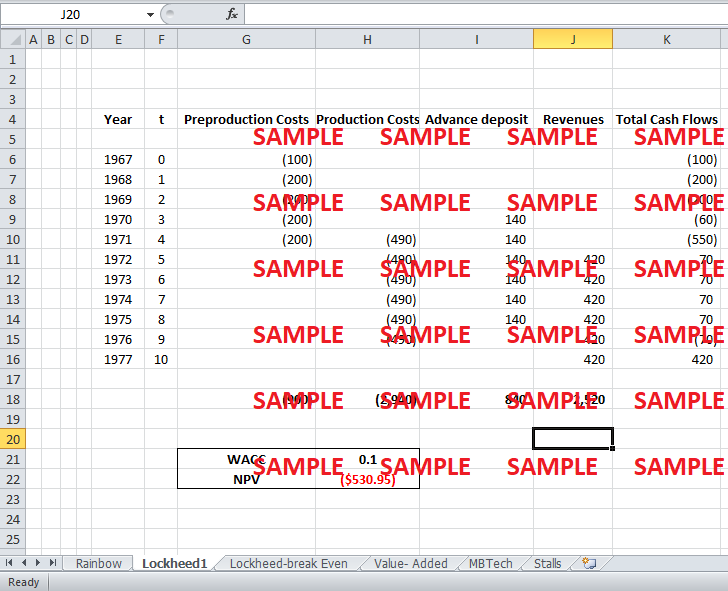 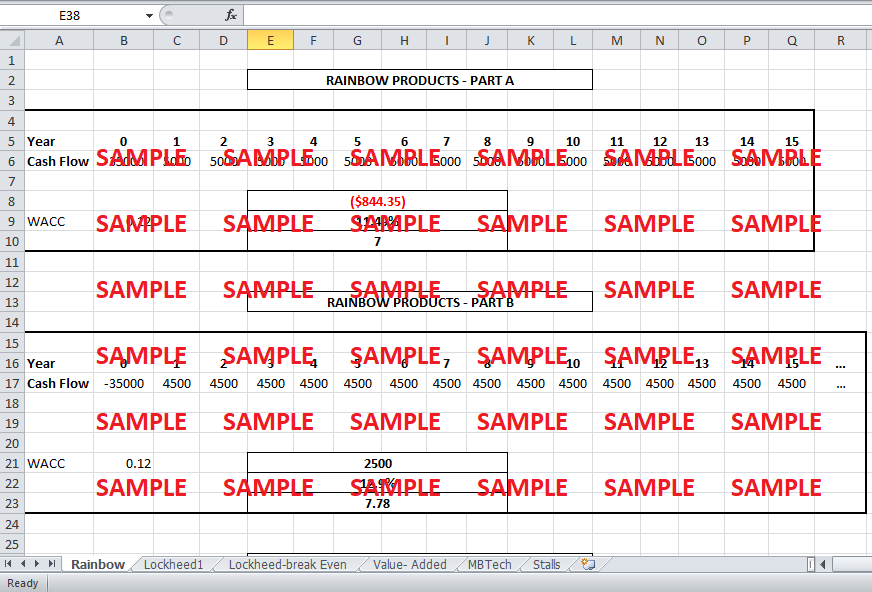 The company should base its decision on NPV and IRR as they are more accurate and sophisticated methods as compared to payback and hence should reject the project of purchasing the paint mixing machine.

The purchase of the “Good As New” service contract would result in payback, net present value and IRR of 7.78 years, $ 2500, and 12.9% respectively. We assumed weighted average cost of capital to be equal to 12% as the purchase of service contract didn’t affect the risk of the project substantially. All three methods employed indicate that the company should purchase the machine with a service contract and incur an additional expenditure of $500 each year as this would positively impact the firm’s value and increase shareholders' wealth.

The plan of reinvesting annual cost savings would result in payback, net present value and IRR of 7.65 years, $ 15000, and 15.4% respectively. We assumed weighted average cost of capital to be equal to 12% as reinvestment of annual cost savings didn’t affect the risk of the project substantially. All the three criterions used for determining the financial feasibility indicate that management go for the project.

Refer to the excel sheet for all the calculations.

The purchase of a paint mixing machine without a service contract or reinvesting plan is not at all an option to go for as it would decrease the firm’s value. Service contract plan and reinvesting of cost savings plan are mutually exclusive that is only one of the two can be implemented. When we compare both the plans we clearly see that the reinvestment plan is a better choice in terms of all the three criteria employed. It has a higher net present value, higher IRR and lowers payback period compared to the service contract. Hence, the management should purchase the paint mixing machine with the plan to reinvest a fixed percentage of cost savings into new machine parts. This would result in a maximum increase in shareholders' wealth.

Based on IRR, each proposal is eligible for selection as IRR is greater than the weighted average cost of capital in every case. As all proposals are mutually exclusive of each other (apart from adding a new window and updating the existing equipment which are independent) we need to select the proposal with the highest IRR which in this case is renting a larger stand which has an IRR of 1207.6%.

Each proposal results in positive net present value which means that each of them contributes positively towards the firm’s value. As we face the constraint that proposals are mutually exclusive (apart from adding a new window and updating the existing equipment which is independent) we need to select the proposal which gives us the highest NPV value. Hence according to NPV criteria, we should go for building a new stand which would result in NPV of $30,283.

NPV and IRR can give conflicting rankings when analyzing mutually exclusive projects. The difference in ranking can occur due to many different reason like the timing of cash flows, size of investment and project, etc. One of the major reasons for the difference in NPV and IRR ranking is because of a difference in an underlying assumption. NPV assumes that cash flows are reinvested at a rate equal to weighted average cost of capital whereas IRR assumes that cash flows are reinvested at a rate equal to IRR. When IRR is very high for example in this case renting a larger stand gives an IRR of 1207.6% it doesn’t make any sense that cash flows can be reinvested at such a high rate. Hence, NPV is considered superior to IRR because it uses the “correct” discount rate (WACC), unlike IRR which is an arbitrary rate normally calculated through trial and error. Also Net present value is a more meaningful indicator to measure the financial impact of an investment.

The Net present value calculated using discount rate of 12% and IRR of the project without any subsidy comes out to be ($31,389) and 18 % respectively. This indicates that MBAtech Inc. should not go for this project unless subsidy is offered by the mayor.

We assume that total subsidy will be paid in equal installments each year.

In order to subsidize the project so that the IRR equals 25%, the mayor has to offer a total subsidy of $205,267. This is calculated by using goal seek function in excel by putting the target cell equal to 25%. The total subsidy would be given out in four equal installments that is $51,317 each year.