One of the critical success factors in the IT industry was the presence of a qualified and talented workforce. As this is a purely service based industry a firm needed the absolute best professionals in the market in order to sustain its customer base and to achieve stable growth. Keane achieved this via constantly monitoring the industry for small businesses, which it could acquire and retain its top professionals which would add value to its business. Metro was regarded as having outstanding professionals who stayed loyal to the firm and Keane was aiming to target this particular trait of the company in order to expand its base of professionals. Non-compete agreements in Metro Information Services financial statements, which meant that employees could not work for a competitor, were valued at $1.9 million which showed how much they valued their employees.

The second success factor was expanding and maintaining a customer base with reliable service and/or products. As one-time customers became long term relationships, a firm was better able to hedge itself against the cyclical behavior of industry as the IT industry was plagued by price wars and competition from smaller startups. If a customer has committed to one firm, it would only stay loyal if it received satisfactory services towards which Keane and Metro Information Services were leaning against. In Keane’s financial statements, they had identified customer-based intangibles and Metro Information Services had done the same. Metro Information Services customer base was estimated to be worth $17 million for the year ended 31st December 2000. 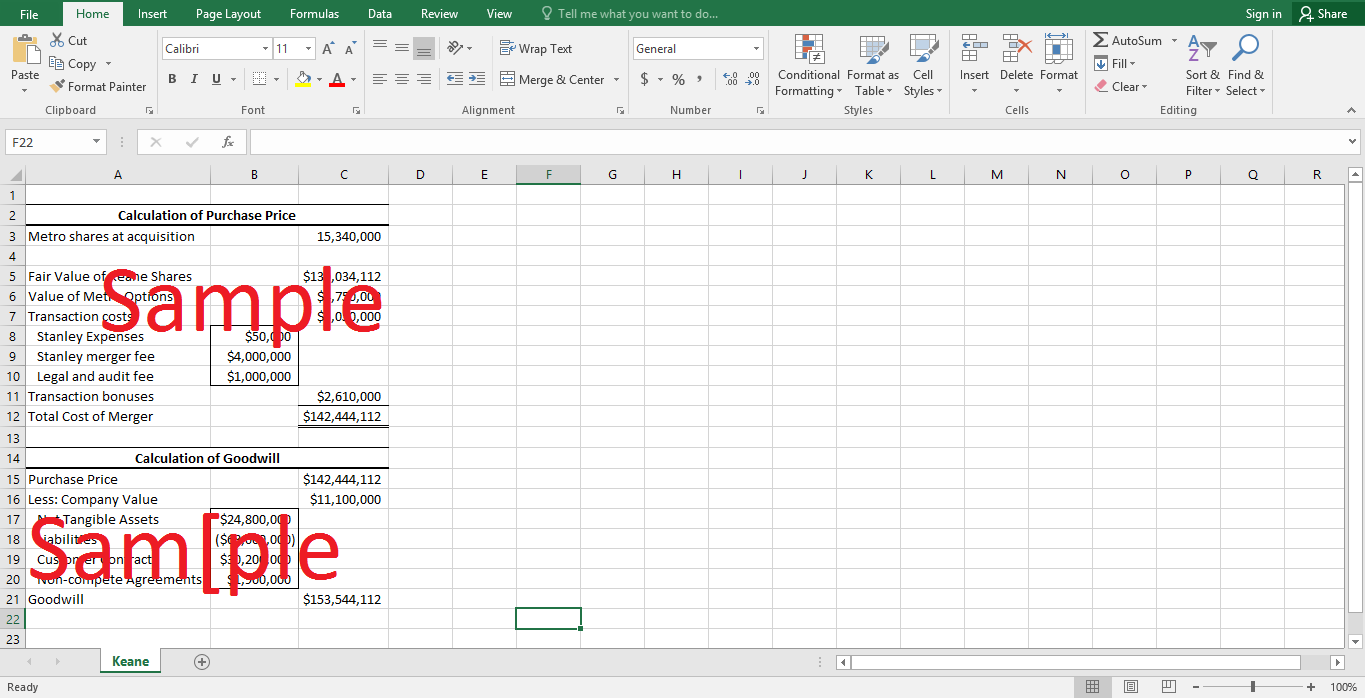 The acquisition transaction of Metro Information Services was to be accounted for via the Purchase Method. Keane had hired Morgan Stanley to be its financial advisor for the acquisition and had said that they would reimburse Stanley for $50,000 of expenses and would pay a $4 million fee upon completion of the merger. Under the terms of the merger, Keane would exchange 0.48 shares for each share of Metro. Additionally, Keane were to exchange share options of Metro worth $4.75 million. Additionally, legal and audit fees regarding the acquisition came out to be about $1 million. Keane’s average share price before and after the merger came out to be about $17.55 per share.

Hence, Keane acquired an average of 15.34 million shares of common stock. According to the share exchange of 0.48 shares for every share, Keane exchanged roughly 7,363,200 shares at $17.66 which amounted to around $130 million. The value of options assumed came to be around $4.75 million as stated above. The transaction fees consisted of the fees payable to Morgan Stanley, audit fees and legal fees which amounted to $5.1 million in total. Also, in the merger agreement, Keane had to make sure to disarm any potential conflicts of interest between the management and shareholders of Metro hence the executives of Metro were to derive financial benefits in the form of transaction bonuses amounting to $2.61 million. They were also to claim severance packages if their employment was terminated, but as there wasn’t any termination, no severance pay was given out.

Keane is buying net tangible assets worth $24.8 million, liabilities with fair value of $68 million and intangibles worth $32.1 million which included customer contracts and non-competing agreements. Also, while not noted in the financials, Keane was buying the management and professionals of Metro, as well as none of the executives were sacked after the acquisition.

Assume that Keane only identifies the assets described in page 5 of the case. How much of the acquisition price would be allocated to goodwill? What does goodwill include? What other intangible assets acquired from Metro would investors like to know about? Why doesn’t Keane allocate part of the acquisition price to those assets? What recommendations would you give to Keane’s CFO with respect to communicating to statement users the different components of goodwill and their valuation?

If Keane had only identified the assets and liabilities identified in page 5 of the case, the goodwill would come out to be $153 million as shown in the attached excel file. Goodwill includes mainly customer base contracts and the brand name of Metro Information Systems estimated at around $106 million. Investors would like to know specifically about the quality of professionals working in Metro, and how Metro had instilled loyalty in them, their vast and diverse network of 33 branches located throughout the United States and the increased synergy between the two companies as they would be able to gain around $15 million in cost savings by eliminating redundancies in their overall operating framework.