Kinder Morgan Inc, a North America based leading transporter and distributor of energy, is evaluating an acquisition offer of $107.50 per share from a consortium led by the senior management. Soon after receiving the offer by Richard Kinder, the CEO of KMI, the board of directors formed an independent committee called “special committee” who was responsible for fair judgement of the acquisition offer. The special committee further hired Morgan Stanley and Blackstone as independent advisors for the evaluation of the deal. As per the special committee’s decisions, the offer had increased from $100 to the current final offer of $107.50. The job of the special committee is now to make a concluding decision for the deal in the light of the final offer. In addition to determining the appropriateness of the price, the committee must also consider the legal and regulatory implications of the deal. 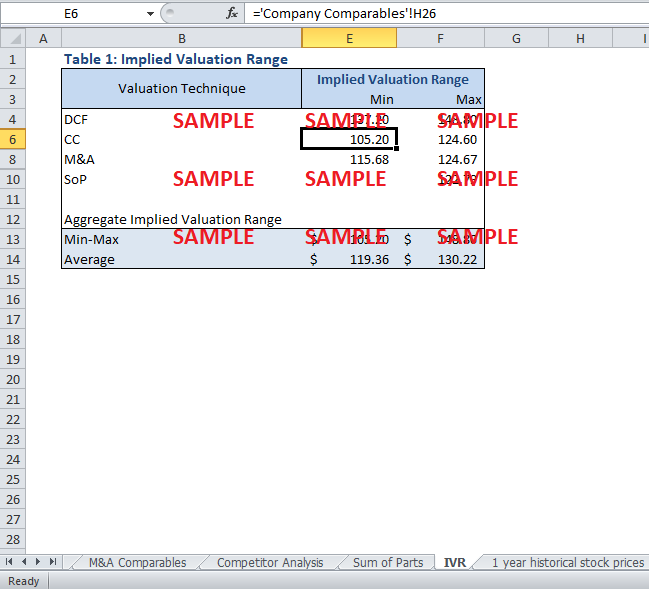 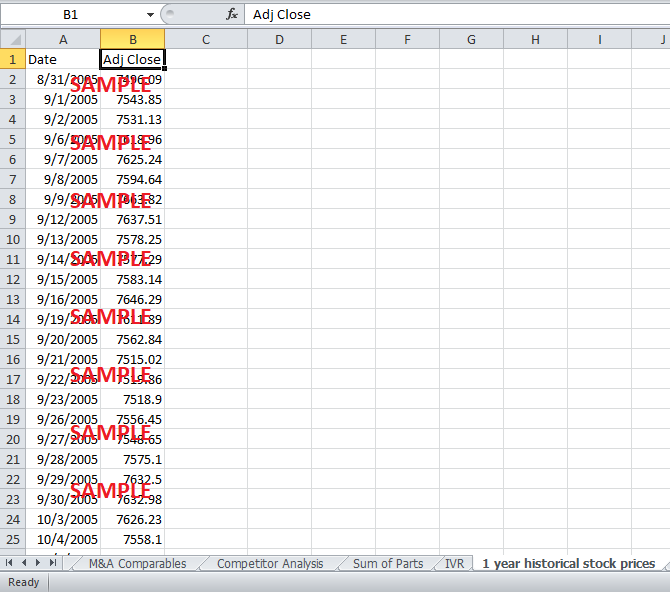 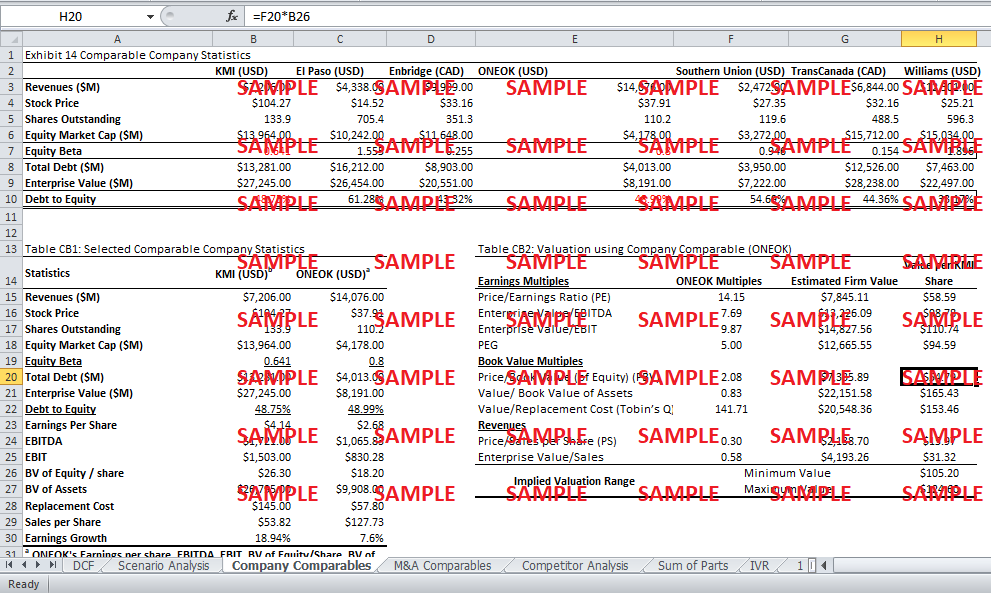 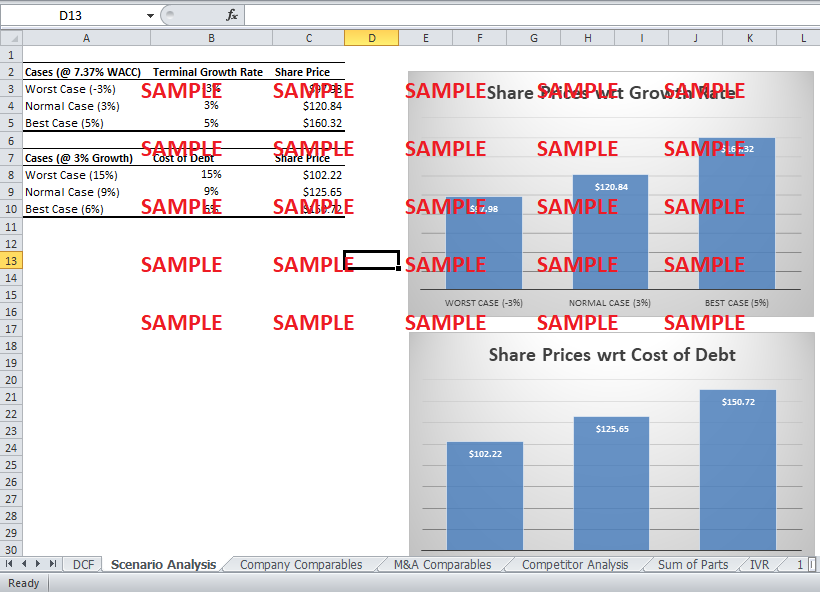 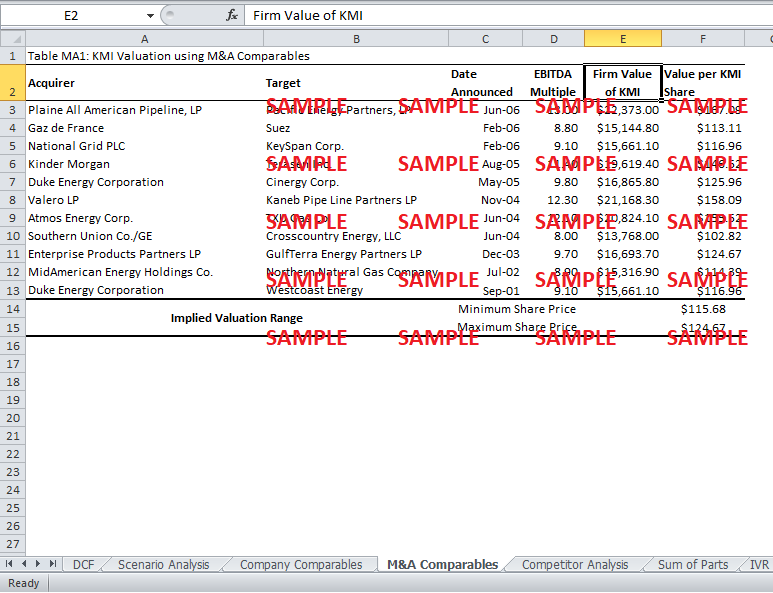 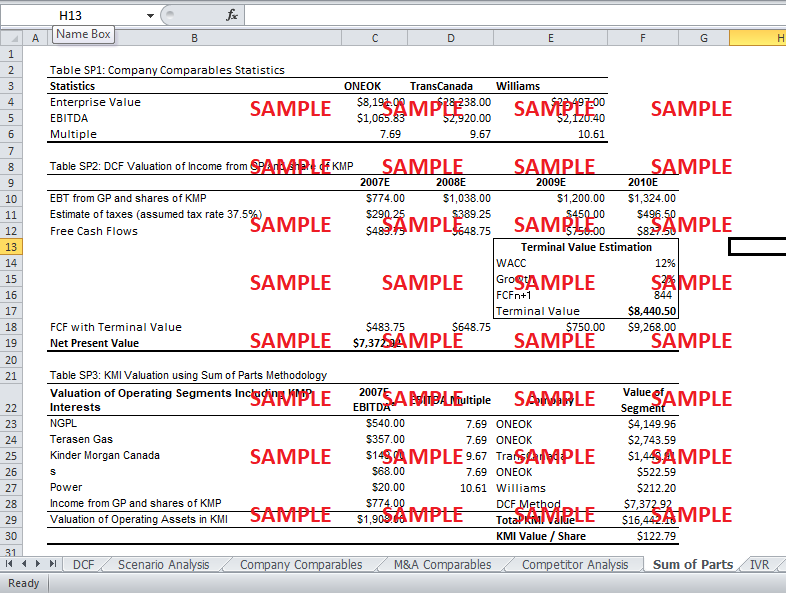 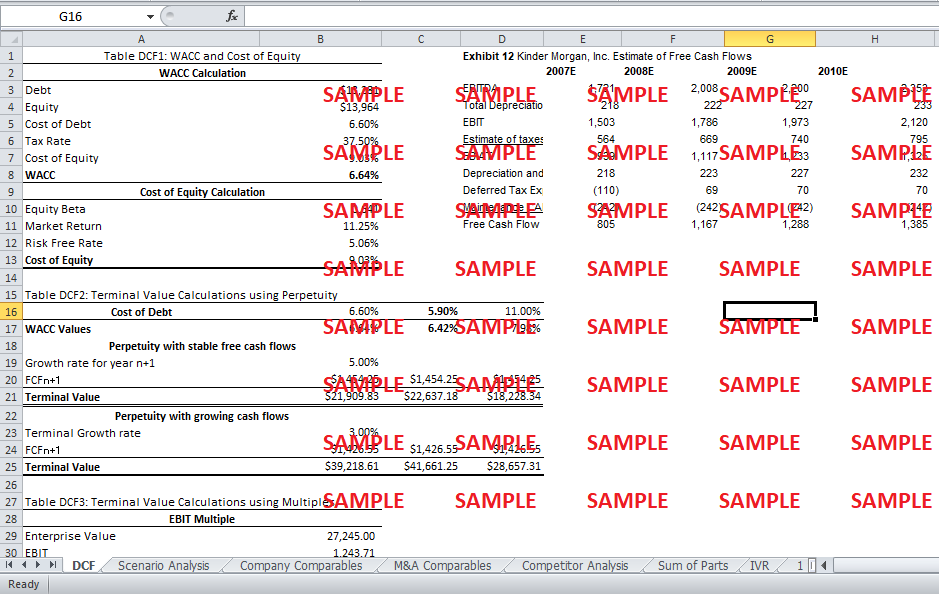 In this report, independent evaluation of the acquisition offer has been conducted to reach a conclusion on behalf of the special committee. Firstly, the bidding strategy of the buyers has been briefly discussed. Moreover, to account for the legal implications, nonprice elements of the deal are also being discussed in the light of the two lawsuits filed against the transaction. Then, valuation of the KMI share has been performed using four different valuation techniques including DCF, company comparable multiples and M&A multiple and sum of parts. Finally, the last section derives recommendations based on the analysis and concludes.

Kinder Morgan Inc. (KMI) is a leading transporter and distributor of energy, such as natural gas, CO2 and petroleum, in North America. KMI owns and operates an extensive network of pipelines throughout the United States and Canada. Thus, one of the main sources of revenue for KMI is the customers who directly use the infrastructure of KMI. Furthermore, Kinder Morgan Energy Partners (KMP) is a Masters Limited Partner of KMI who owns most of the pipeline assets that are operated by KMI. Hence, another major source of revenue for the company is the management fee paid by KMP. Figure 1 and 2 below show the SWOT analysis, Porter’s analysis and competitors analysis respectively.

Furthermore, the competitor analysis of KMI’s major competitors - based on financial metrics such as market capitalization, growth rate and other market and capital structure ratios - reveals that the financial position of KMI is much stronger than its industry and direct competitors (Morningstar, 2017). See appendix A for reference.

Management buyout (MBO) is a buyout in which the company is purchased by the running managers of the company (Eilenberger, et al., 2009, p. 72). Furthermore, Leveraged Management Buyout (LMBO) is the one in which the management uses the company’s assets to obtain debt funding for the purchase (Eilenberger, et al., 2009, p. 72). The current scenario is the latter. The senior management of Kinder Morgan Inc. has formed a consortium with some shareholders and a group of financial sponsors led by Goldman Sachs who will raise the necessary debt financing for the buyout. Empirical evidence suggests that MBOs are healthy for the future performance of the company because the existing management has a very good understanding of the business (Berry & Green, 2016, p. 32). Furthermore, by becoming owners rather than employees, the management will have better incentive to increase the value of the company (Berry & Green, 2016, p. 32).

The bidding consortium, led by Kinder, is at a highly-advantaged position being the initiators of the deal. As highlighted in the case, the share price of KMI recently decreased to $89.5 from $93 which is perceived to be much below the true share value indicating an increase in stock price in near future. The management consortium availed this opportunity window by making an offer while the share price is below the true value. Moreover, the management led consortium also has a first mover advantage. This is because the management has access to private insider information to the true potential – and hence true worth - of the company. Any outside investor would be at a disadvantage against the management, and hence, may end up paying more than the true worth of the company’s shares. This fends off investors from entering the bidding process. Furthermore, since there are no competing bidders, the consortium does not face a pressure to increase the offer price, hence, the risk of losing value to the target shareholders is very low. Overall, the bidding strategy of the consortium seems to be successful in creating a favorable bidding environment.

Two separate lawsuits have been filed against the deal by minority shareholders. One claim is that the MBO negotiations lack a proper bidding process. The second claim is that the potential buyout transaction is grossly inadequate and unfair. The evaluation of fairness in an MBO deal is inherently controversial because there is a high possibility of the buyer having an insider advantage. Therefore, the shareholders may not be able to assess the true value of the company given that the buyers have a manipulative power over the company assets (Mao & Renneboog, 2013). In other words, management may speak down of the true potential of the company to decrease its value. It has been observed that the management has the tendency to press the stock price of the company down in the market and then buy the company against the low market price of the share (Mao & Renneboog, 2013). In the case of KMI, the share price of the company had decreased after an announcement about the acquisition of a KMP expansion project which was widely believed as a prosperous project for the company by analysts. As mentioned in the case, analysts expected the true share price to lie between $100 to $120. In the light of these facts, it seems that the decrease in share price is a market induced phenomenon and has nothing to do with the management.

One of the main devices that are used to ensure a fair deal and to protect the rights of the shareholders who are not a part of the bidding consortium is to form a Special Committee (Coates IV, 2005). The Special Committee is responsible as well as authorized to accept or reject the bid based on its evaluation. It is common for the Special Committee to hire financial advisors to help with the valuation of the firm and other related matters (Coates IV, 2005). In this case, the board of directors of KMI formed a Special Committee for the deal under discussion, soon after the bid was initiated by the management. Furthermore, the committee hired Blackstone and Morgan Stanley as it financial advisors, both of whom are uninterested in being a part of the consortium or the bidding process.

Another main device used to ensure fairness of an MBO is market-check or shopping for potential investors (Subramanian, 2016). The target shareholders seek other investors or buyers to make the bidding process more competitive. As mentioned above, it is hard to find competitive bidders to make the process fair as any external buyer would inherently be at a disadvantage against a buyer with extensive insider information, the management (Subramanian, 2016). To increase competition, the Special Committee of KMI has interviewed almost 35 potential buyers, none of whom showed any interest. Hence, consistent with the literature, the Special Committee has not been able to identify any other interested buyer for KMI in the shopping process. Therefore, the Special Committee must evaluate the bid as a sole offer based on its perceived true value of the company’s share.

In the light of facts presented in the case, the legal implications of the lawsuits seem harmless. The formation of the Special Committee, appointment of independent financial advisors and market-check or shopping indicate that the fairness test of the MBO transaction is likely to be clear. Furthermore, the independent due diligence by the financial advisors and the special committee will ensure that the decision is made against the fair value of the company. Hence, the rights of all of the noncontinuing shareholders are well-preserved in the negotiations of the deal.

As already mentioned, the share of KMI has been evaluated using four different valuation techniques; discounted cashflow (DCF), company comparable, M&A multiple and sum of parts. This section conducts a detailed discussion of the calculations and results of each valuation method and determines an implied valuation range.

WACC is estimated using the formula given below:

While return on equity is estimated using capital asset pricing model formula, as given below: