Kota Fibres, Ltd., is a nylon fiber production firm situated in Kota, India. Eleven members of the family own a majority stake in the business, which pays out dividends regularly. Kota Fibres is a prosperous firm, yet they are plagued with acute financial problems and frequently needs to borrow from a bank to keep up its operations. In the last three weeks, the firm has overdrawn its bank account three times. This means that until Kota Fibres' CEO, MS. Pundir, offers a detailed action plan and financial prognosis, the loan officer will refuse to give further credit to the company. Using the financial projections and ideas from the firm's Field Sales Manager, Transportation Manager, Purchasing Agent, and Operations Manager Ms. Pundir came up with a financial plan that addressed the issues at hand and demonstrated the potential of the company to clear up the loan by year-end. In this article, we examine the important forecast assumptions made and then do a scenario analysis to determine what activities, internal and external environments, were responsible for the cash deficits in the company's operating budget. Using SWOT analysis and Porter’s five forces, we design our strategy and present our proposed solution and execution plan. 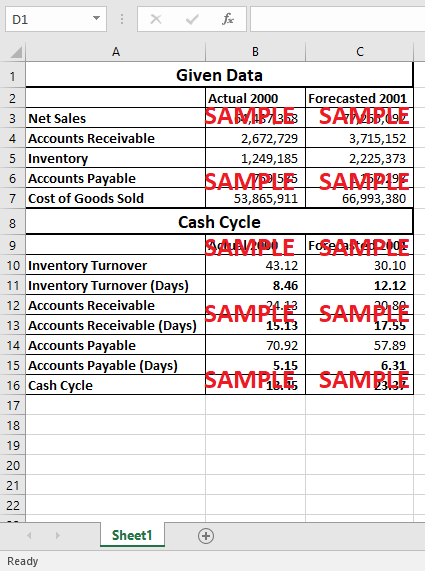 Mehta used the existing operational assumptions of Kota Fibres to create the financial forecast. Various factors are taken into accounts, such as the cost of items sold, income tax, excise tax, and running costs. Assumptions include the salaries of employees, a minimum cash balance of INR 750,000, and a dividend payment of INR 500,000 per quarter, just to name just a few. With the company's sales collection tendencies in mind, Mehta came up with an accounts receivable prediction. As an example, 40% of last month's sales and 60% of the previous month's sales were collected in the sales collections for this month. Mehta figured out the company's cash cycle by looking at receipts showing where money was going.

While Kota Fibres is profitable, the lawsuit shows that the company has been experiencing a liquidity crisis. INR 1,335,848 has been predicted to be the company's net profit for the year 2001. In 2000, the company had a profit of INR 2,550,837. If Kota Fibers is profitable, its profits will decline in 2001 regardless of how profitable it is. When comparing the company's actual year 2000 balance statement to its predicted year 2001 balance sheet, the company's inventory and accounts receivable both climbed significantly. The larger percentage of total assets in 2001 compared to the previous year is due to the rise. There are now INR 4,684,237 in current assets, with an estimated 2001 value of INR 6,690,525 For the year 2000, the total assets are INR 13,295,604, and the following year, they are expected to rise to INR 15,628,161. Total current assets are expected to account for 43% of the total assets in 2001, up from the previous prediction of 35% in 2000. Because of the company's financial difficulties and the necessity to get further financing, the expanding assets without corresponding increases in earnings are a bad omen.

The A/R and inventory accounts have grown in the predicted year, adding to the growth in the cash cycle amount in 2001, according to the data. Cash cycles in 2001 are expected to be 23.37 days, compared to 18.45 days in 2000, according to the table shown in Figure 1. For this reason, the cash of Kota Fibers is expected to be locked up for an average of 23.37 days in the company's current assets. Cash was held in current assets for an average of 18.45 days as of 2000, according to the company's actual cash cycle. The longer Kota Fibres' cash cycle is, the more money it will require from outside sources, hence the company has to reduce its cash cycle projections. The A/P term should be lengthened while the A/R period and inventory holding time should be shortened.