Lambeth Custom Cabinets was a shop owned and operated by Jack Lambert. The shop sold custom made cabinets for its customers. Lambeth was concerned about the manufacturing overhead variable when he reviewed the financial data for September. For September, the journal entries are done for each transaction. The journal entries are used to construct the income statement and balance sheet for the month ending on September 30th. Lambeth also lost business from Mrs. Carter to the competitor by quoting a higher price. Therefore, Lambeth also became concerned about the higher cost of making the cabinet as this might lead to future loss of revenue. 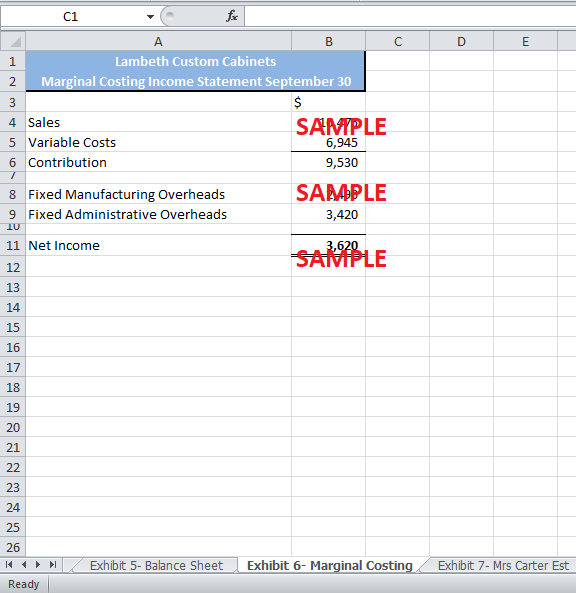 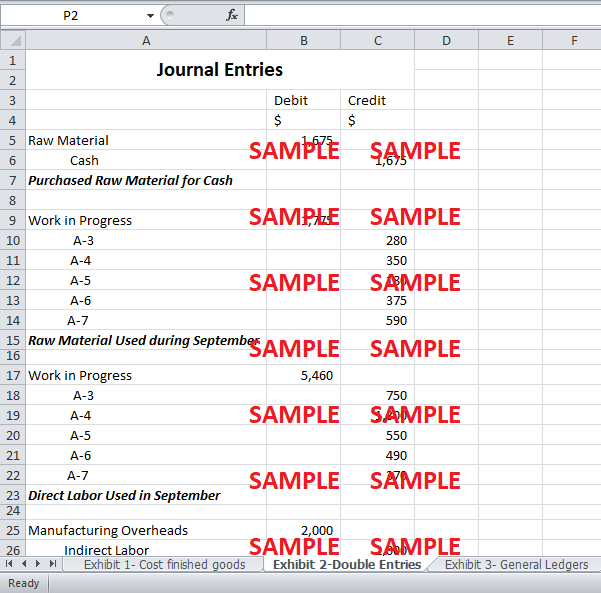 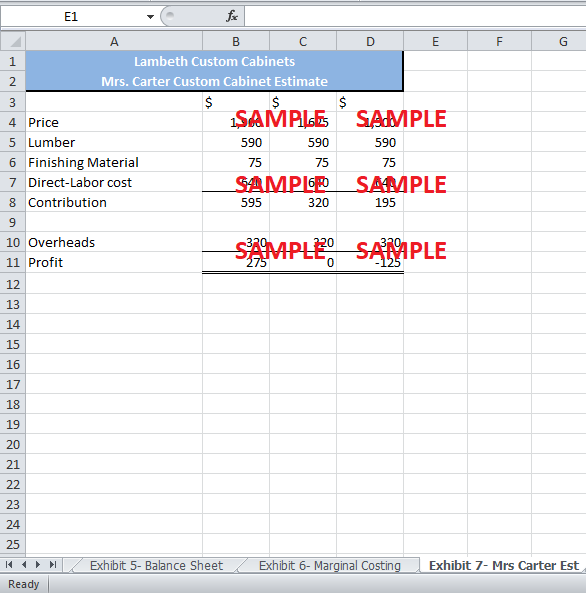 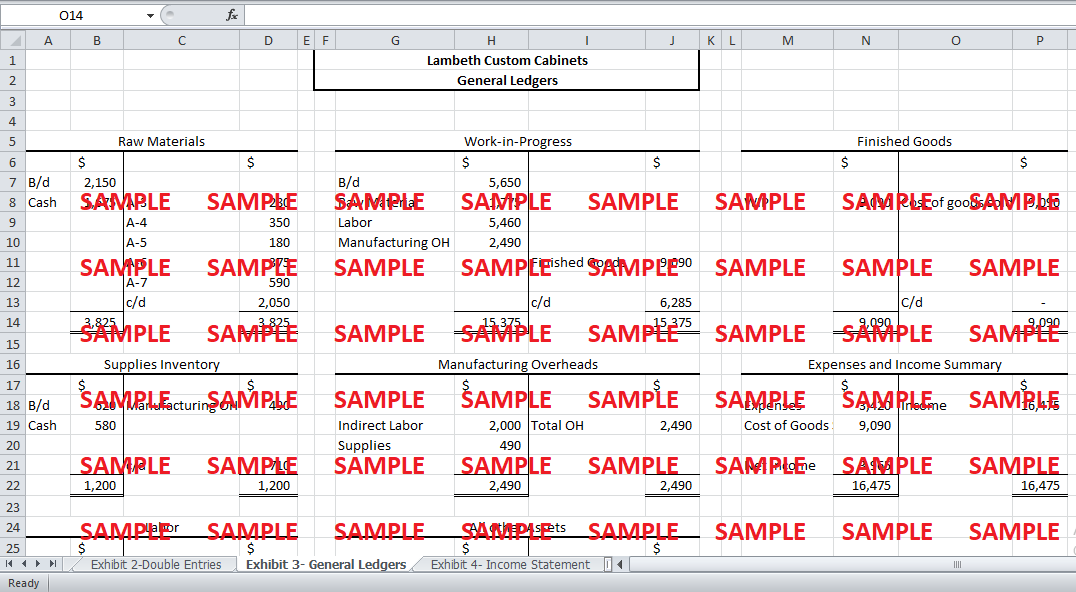 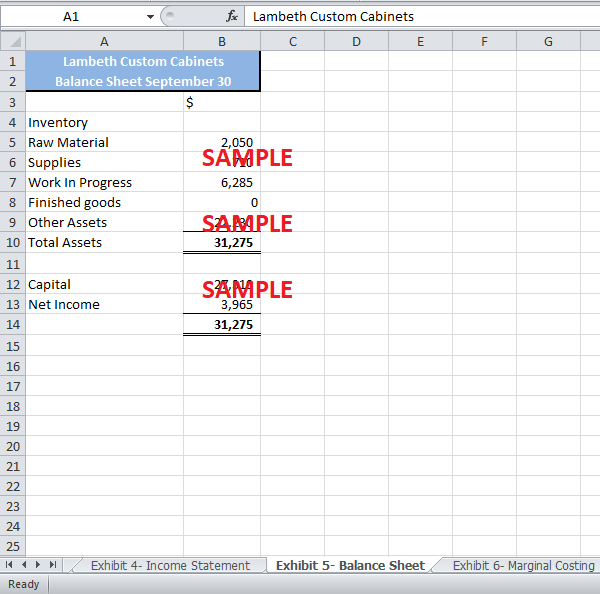 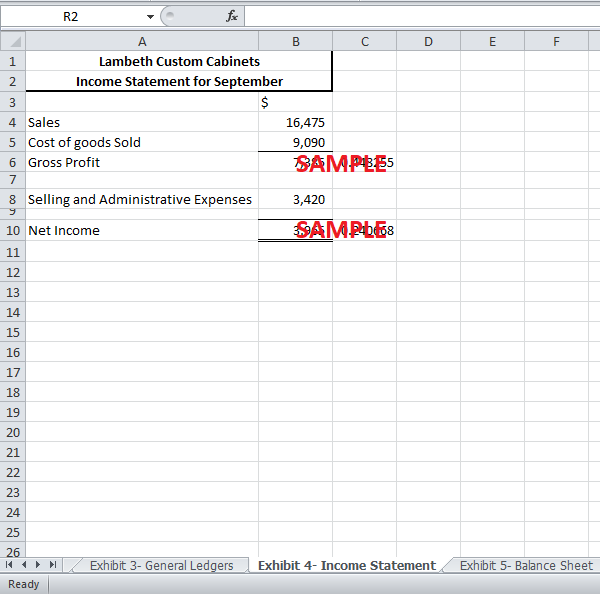 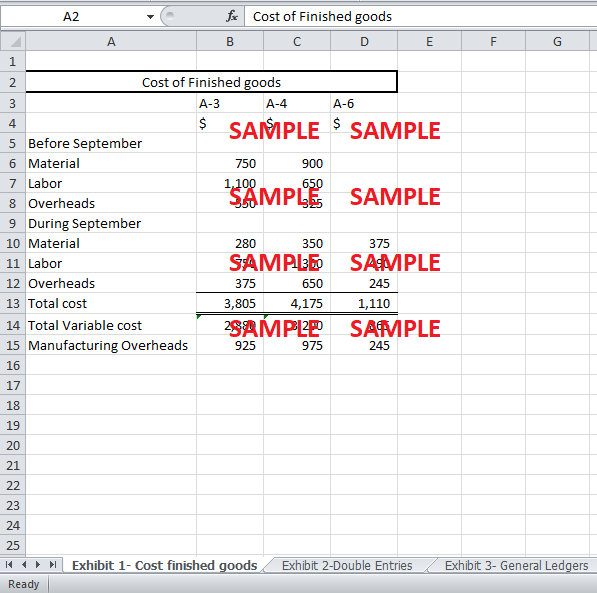 1. Prepare journal entries for the transaction for September.

For the calculations of the cost of finished goods, the cost for A-3, A-4, and A-6 has been calculated by summing up material, labor and the overhead cost incurred before and during September. It is assumed that the manufacturing overheads are absorbed in 50% of direct labor. The costs of finished goods, A-3, A-4 and A-6, are $3,805, $4,175 and $1,110, respectively. The calculation is shown in Exhibit 1.

It is assumed that, during September, all the expenses, supplies, direct and indirect labor, and material payables were paid for in cash. Similarly, the customers for A-3, A-4 and A-5 paid the accounts receivable in cash. These assumptions cause a change in other assets ledger as shown in Exhibit 3.

3. Prepare a balance sheet and income statement for September 30th.

The general ledgers in Exhibit 3 are used to make income statement and balance sheet for September 30th. Exhibit 4 shows the income statement for Lambeth in September. The revenue earned from the three cabinets finished is $16,745. The total cost of A-3, A-4, and A-6 using all the manufacturing cost under absorption costing is $9,090. The gross margin for the month was $7,385, which is around 45% of the revenue. The selling and administrative cost of $3,420 is charged to the gross profit. The net profit is $3,965. Due to high administrative expenses, the net income falls to 24% of the revenue.

Exhibit 5 shows the balance sheet made from the available information. Lambert has four types of inventory; raw material inventory, supplies inventory, work in progress inventory and finished goods inventory. All these inventories are reported in the balance sheet at the closing balance of their ledgers. The closing balance of the other assets is $22,230. Hence, the value of total assets at September 30th is $31,275. The net income is added to equity and capital. The capital of $27,310 is calculated after subtracting the net income from the total assets.

In variable costing, the absorption rate i.e. 50% of direct labor would not apply for fixed manufacturing overheads. The fixed cost will be treated as a periodic cost. Therefore, the total fixed cost incurred in September will be charged to the income statement and subtracted from contribution. Hence, the net income under variable costing is $3,620.