Lufthansa is a German airline company which recently purchased twenty aircrafts from Boeing in the US. As the payment due in a year and denominated in another currency, the firm faces an exchange rate risk. It is vital for the firm to hedge against this risk because, otherwise, it has a significant chance of losing more money than they intended. Herr Heinz Ruhnau, the chairman of Lufthansa, hedged half of the $500 million payment using forward contract. He should have hedged the entire payment using foreign currency options as this was more appropriate and cost effective for the firm. The Board of Lufthansa is concerned regarding the decisions taken by Herr. They should investigate the reasons behind the decision he has taken about buying the new aircrafts, financing their payments and hedging these payments. If his justifications of these decisions are not concrete with relevant analytical proof, Herr should be fired. He should be retained only if he fails to justify the hedging alternative he used but he should be asked to consult the board before taking an important decision that can significantly affect the firm. 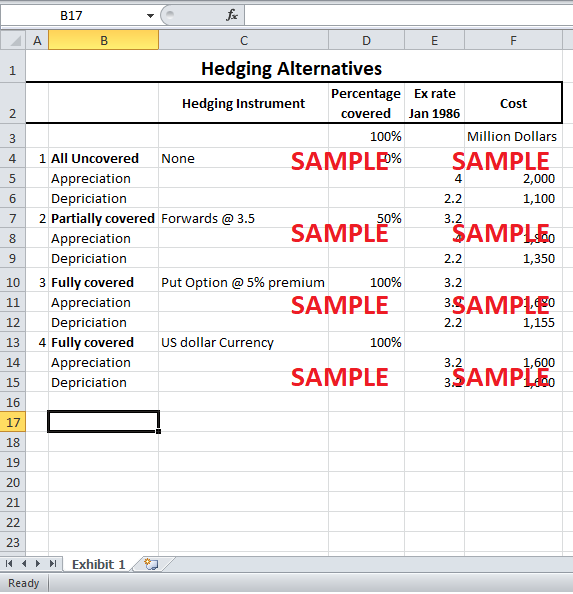 In 1985, Lufthansa, a German airline company, purchased twenty 737 Boeing aircrafts from a US corporation for $500 million. A contract was signed by Herr Heinz Ruhnau, the chairman of Lufthansa. This contract indicated that the payment was to be done in January 1986 when the aircrafts were delivered. At this time, the exchange rate of US dollar to Deutschemark (DM) was 3.2 DM per dollar. The dollar had been constantly appreciating against the DM for three years and the appreciation of dollar has accelerated in the recent years. Herr believed that the dollar would depreciate by the payment date. As he was responsible for the purchase, he wanted to evaluate whether he should use hedging.

In this situation, Herr’s decision making, determination of expansion and leadership role in senior management are analyzed. It is discussed that were the actions taken by Herr in the best interest of the firms or what, according to us could he have done differently. For our analysis, we used 2.2 DM/$ as the depreciated rate because it’s the lowest exchange rate in three years. Similarly 4 DM/$ is used as the appreciated rate as it is the highest exchange rate in three years.

Mr. Ruhnau has made a decision to purchase when the dollar against DM was at its highest rate and the trend was positive which meant a rise in rates. Hence, this decision meant that due to exchange rate appreciation of dollars. which seemed highly likely, the company would have to pay a higher payment in January 1986 than the payment in January 1985.

There could be two outcomes of this purchase. Either the dollar against DM exchange rate will go or will depreciate over time, according to Herr’s expectations. In this situation, Lufthansa will have to make less payment for the planes. However, if the exchange rates follow the trend and appreciate within the next year, the company might be in a risk of going bankrupt when it is unable to pay high payments to the US Corporation. Thus, this decision affected Lufthansa’s strategic future immensely due to the exchange rate risk. It is difficult to determine the possibility of each outcome. Moreover, even though Herr strongly believes in the weakening of the dollars, the contract size for Lufthansa is so large that it cannot be left uncovered against transaction exposure. Therefore, hedging is essential for the firm to reduce its exposure to risk.

Herr also realized the enormity of risk Lufthansa was facing. He decided to hedge half (50%) of the payment through a forward contract set at 3.2 DM per dollar. So, using this future, Lufthansa could buy $250 million on January 1986 for 800 million DM. However, he left the remaining $250 million unhedged and fully exposed to exchange rate risk. This way if the rate appreciated to 4 DM/$ the cost would be 1800 million DM but if the rate fell to 2.2 DM/$ the cost would be 1350 million DM. This was done most probably to take advantage of a fall in dollar value relative to DM. This way, he partially hedged the risk against the risk.

There are other hedging alternatives that Lufthansa can use. The firm could cover the entire risk exposure using forwards. For this the firm would buy a forward for $500 million with a settlement date in January 1986 at an exchange rate of DM 3.2/$. Hence, the payment would remain fixed at DM 1.6 billion. There will also be additional cost of buying the forward contact. Another hedging option is to buy 500 million U.S. dollar in 1985 and hold them in an account until payment is due. This way the fluctuation in currency will not affect the amount payment to be made. This option will only be feasible if the firm has 1.6 billion DM currently available which is hardly likely. So, in order to avail this option, the firm would have to take a bank loan which will cost the firm interest until the full principal is paid.