New Earth Mining, Inc. is considering an investment opportunity in South Africa. To consider Iron Ore in South Africa an attractive investment for New Earth, this project is evaluated by two capital budgeting techniques that are NPV and IRR. External Consulting Approach is used to find NPV. The cost of equity is given i.e. 24% while the cost of equity is calculated by taking Weighted Average Cost of three different debts i.e. 9%. Financing through equity remains constant throughout the period, but the project becomes less leveraged with time due to repayments and prepayments of debt. Project’s Leverage start from 80% and reduced to 0% in the end of Year 2018. Change in leverage results, in five different Weighted Average cost of Capital that are 12%, 13% 14% 18% and 24%. Cash Flows are discounted, at different rates, to get their Present Values. The NPV calculated by this method is 112.9 million dollars. This handsome amount of NPV shows that this investment opportunity is indeed attractive.

IRR of this project is calculated to be 28%. IRR of this investment opportunity is greater than all five different WACC. Hence, in the light of IRR, as a capital budgeting technique, the project is attractive. 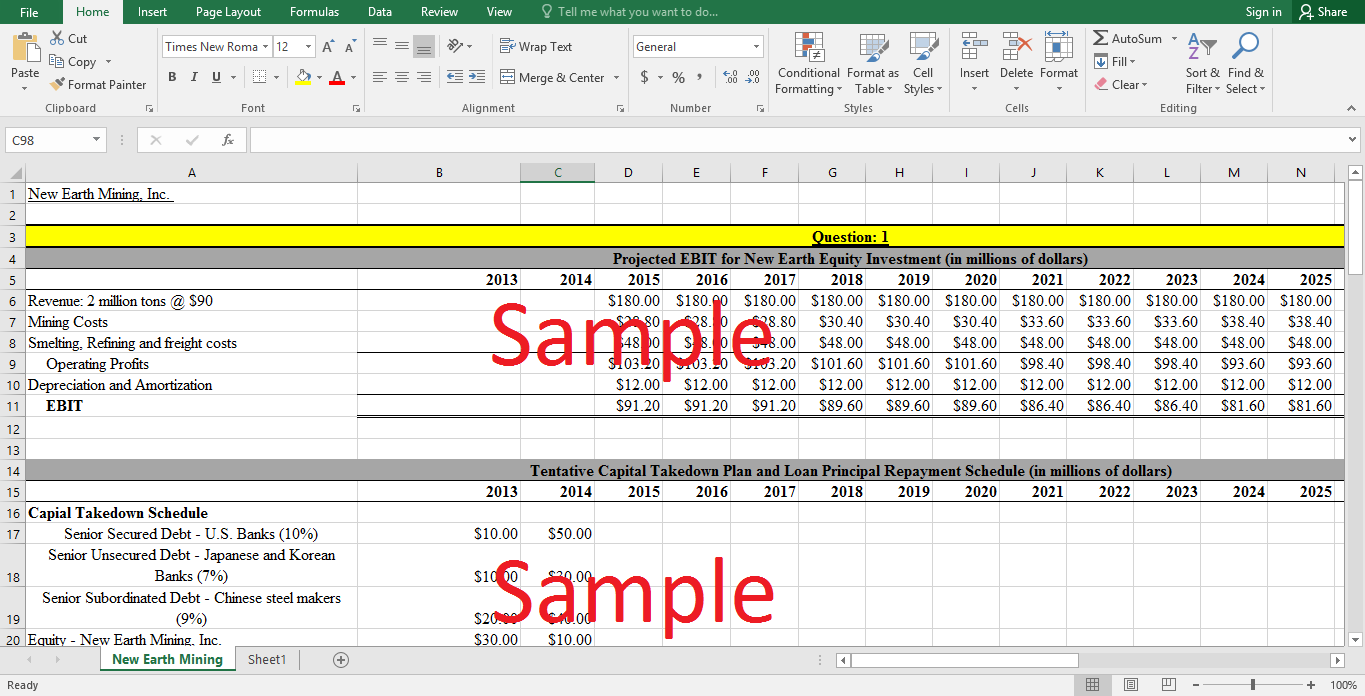 Which valuation approach in analyzing the NPV of the new investment is the most Accurate, why are the other methods inaccurate?

Hint: the NPV for two of the four approaches is given in the case.

Following are the four different approaches in analyzing the NPV of the new Investment:

Under Approach 1, the projected cash flows are discounted at weighted average cost of capital similar to New Earth’s WACC. In this case, leverage is assumed to be 12%, which does not make any sense. The project is highly leveraged in the beginning. Moreover, New Earth major operation had been gold operation, so it is inappropriate to use the company’s cost of capital for a new venture.

Under second approach, the cost of capital is based on similar investments that were made by peer countries in iron ore exploration, in developing countries. In this approach, the specifics of the financing package are being ignored. Using other companies cost of capital is baseless because they might have different capital structure and financing package.

External Consulting Firm Approach is considered being the most accurate approach as compared to other approaches. This approach is clearly taking the financing package, debt structure and its repayments into account. In this approach, the cost of NESA’s equity is assumed to be 24% given the high leverage and risk associated with the project. The cost of debt is calculated by taking the weighted average cost of three different debts which comes out to be 9%. In this approach, the cost of capital varies with the repayment and prepayments of debt and as long as whole debt is being repaid the cost of capital becomes equal to the cost of equity.

In internal Analyst Approach, it is suggested to find out NPV by discounting the Cash Flows available to Equity holders, using Flows to Equity Approach, at cost of capital equal to cost of equity i.e. 24%. This approach does not consider the debt and its repayments. If we closely examine the cash flows, the cash flows available to equity holders become equal to the cash flows available to both debt and equity holder in the year ends 2019 because the entire loan was being paid in the end of the previous year. Hence, third and fourth approach works in the same way after four years of operations. External Consulting Firm approach is more accurate as it considers the change in leverage due to repayments and prepayments in first six years.

What is the value added by the design of the financing package? How does it alter both risk and return of the new project? Is it effective at reducing the project’s operating risks?

The financing package of worth 200 million dollars comprises of 80 percent secured, unsecured and subordinated debts. Half of the total financing is taken by the overseas buyers while 30 percent is being financed by U.S bank. The projected cash flows in coming years are healthy, so NESA took a wise decision of borrowing 80 percent of the whole financing. The project pays all its debt in first six years and then in coming 15 years all cash flows are paid to equity holders as dividends. The design of this package helps the company to increase its value. The cost of debt tends to decrease the cost of capital; hence, Net Present Value of the debt is increased.

New Earth is worried about many risk factors such as political risk, corruption, high risk of civil war and nationalization of natural resources by the government. Financing package deals with cost overrun due to mentioned risk factors. In case of overrun the amount of capital supplied would be increased up to 25% for all lenders. This loan covenant makes financing package very effective at reducing the projects’ operating risks.