Nodal Logistic Corporation is a Real Estate Investment Trust (REIT) that focuses acquisition of industrial warehouses and logistics property in high density markets. It earns the majority of its revenues from rents and leases. With the intention of strengthening its long-term competitive position, NLC is looking forward to investing $45 million in an 800,000 square foot industrial property project in Sao Paulo, Brazil. Sao Paulo had 250 million square feet of obsolete industrial space including warehouses. Moreover, adjacent areas to Sao Paulo contained some superior quality of industrial space. As NLC focuses on the acquisition, construction, and renovation of industrial facilities, Sao Paulo seems to be an attractive trading hub. Nodal would face a number of challenges in regard to move in Brazilian market. First challenge NLC would face is to compete with the highly volatile Brazilian currency. Secondly, remitting funds to a non-Brazilian parent in the form of dividends and fees is a hurdle. Thirdly, real estate contracts denominated in Brazilian Reais is a real challenge. Nodal had been writing all industrial real estate agreements in U.S. dollars, which had been extremely influential in its international success. 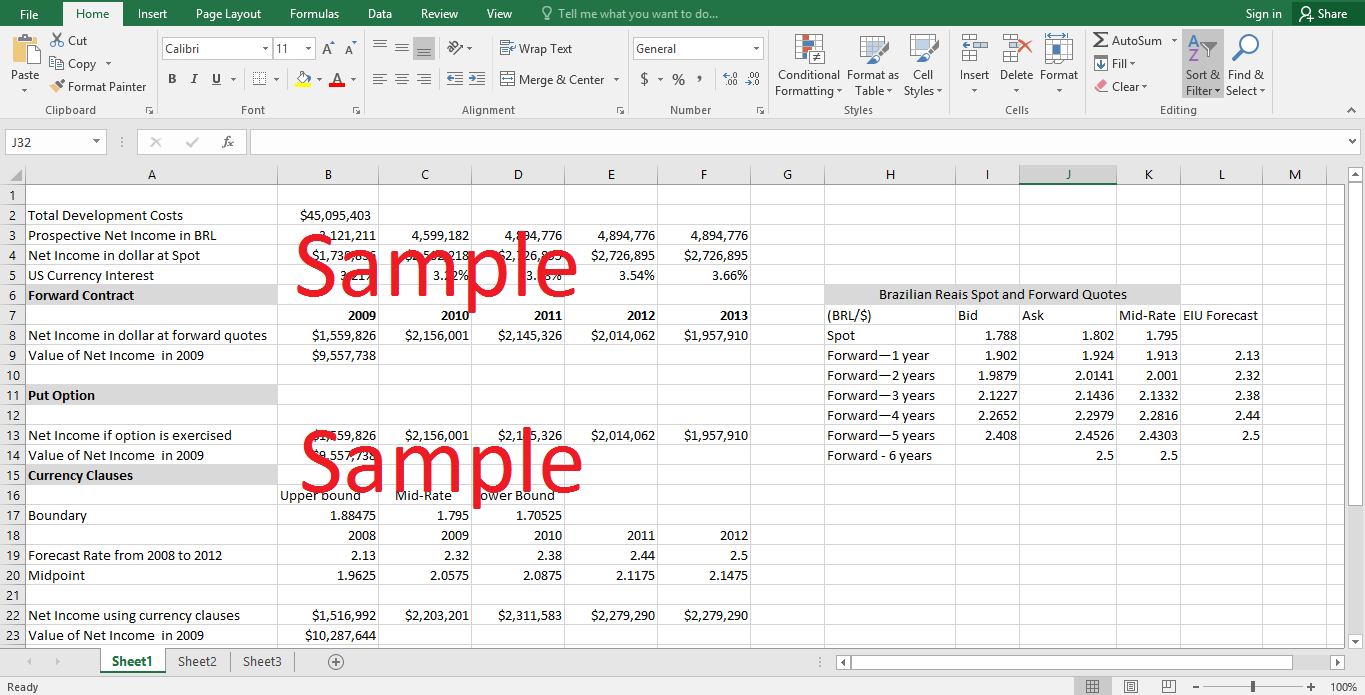 Foreign exchange fluctuations have exposed the company to currency risk. For remitting profits out of Brazil, rent earned in a Brazilian currency had to be converted in U.S. dollars each and every period. The risk Brazilian project poses to Nodal is a transaction risk. On the basis of prospected net income, Nodal is investing high amount of capital in Brazilian subsidiary. This attractive net income, when converted into U.S. dollars at current exchange rate, makes the project acceptable. In recent decades, the value of real remains highly unstable as compared to U.S. dollar. Long periods of inflationary tendencies and hyper-inflation had caused Brazilian currency to change again and again. Brazil faced a massive currency collapse in the second week of January 1999 due daily devaluation of currency. Recently, currency has depreciated, from BRL 1.21/$ to more than BRL 1.70/$. Depreciating Brazilian currency carries a transaction risk, a type of foreign exchange risk, to Nodal. It would result in a lower rate of return and lower earnings for shareholders.

There are five different ways that might allow Nodal to manage the currency risk. These options include; forward contracts, currency options, currency clauses, local currency debt financing, and swaps. Forward contracts, recommended by New York’s bank, allow Nodal to lock in future exchange rates at no cost. To protect the dollar value of the company’s real profit, put option would be another alternative, which gives the right to sell Brazilian currency. In negative circumstances, put option give an assured minimum rate of exchange. Currency adjustment clause is another way of managing currency risk. Under this option, customer will share in the currency risk on both upside and downside of any exchange rate changes.

Another alternative was to take local currency debt to manage exchange rate exposure. One of the local banks quoted 15% interest rate for a five-year fixed rate Brazilian real-denominated loan. Final option was to make use of cross currency swaps.

Nodal would face a high degree of exposure if they chose to remain uncovered. There is a high probability of depreciating Brazilian currency, which will lower the profitability for Nodal of moving into Brazilian market. According to the forecasted valuation of Brazilian currency, real would fall to BRL 2.13/$ in 2008, 2.32 in 2009, 2.38 in 2010, 2.44 in 2011, and 2.50 in 2012.  A projection of increase in Brazilian real per U.S. dollar, from 21% to 43% of central rate of 1.7950, would result in lower earnings, in U.S. dollar. Hence this projection causes a high degree of exposure to Nodal. Currency risk management does not provide an attractive solution of the currency risk exposure faced by NLC. The five year forward rates and strike rates are slightly lower than the above mentioned forecasted rate, starting from 10% increase in the central rate to 40 percent. Hence, the alleviation of currency risk exposure through risk management is little.

Currency risk management options have been assessed to recommend John Penman the best strategy. In forward contract, the five years forward rate at more than 2.4 to the dollar is considerably weaker than 1.7950, resulting in lower dollar earnings. Hence, it is not acceptable to NLC management. Currency clauses adjustment seems to be the best option as it gives highest present value of net income in 2009, but it could result in higher facility vacant rate. Moreover, Brazilian government has not been accepted such a clause in the real estate sector.