Julio Trevino wanted to lease and operate a newly erected gasoline service station owned by the Octane Oil Company (Octane). Trevino had $ 32,000 to invest in the business venture. He started operations of the station on May 1. After 2 months of operations i.e. May and June, he wanted to record and analyze his performance. Therefore, the balance sheets as at May 1 and June 30 were drafted with the income statement for the two months. The Income statement showed a profit of $ 3,565 and a return to investment of 15 %. If Trevino had invested money elsewhere at 15 % annual return. The return of two months would be very small at 2.5 %. Trevino made a wise investment decision by investing in a venture with high profit potential. 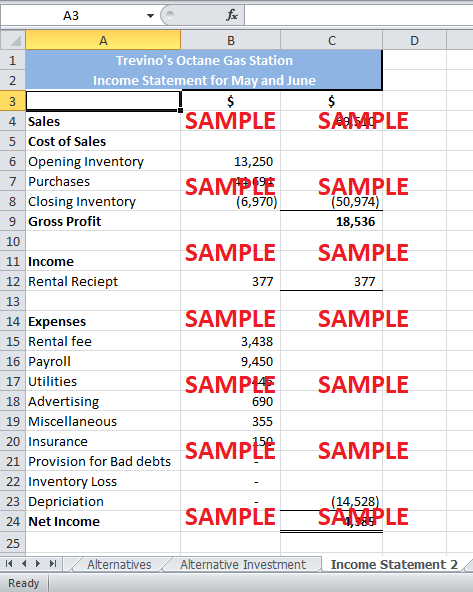 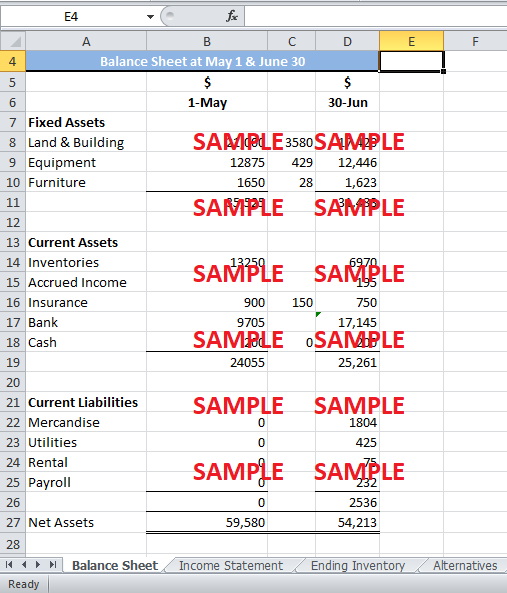 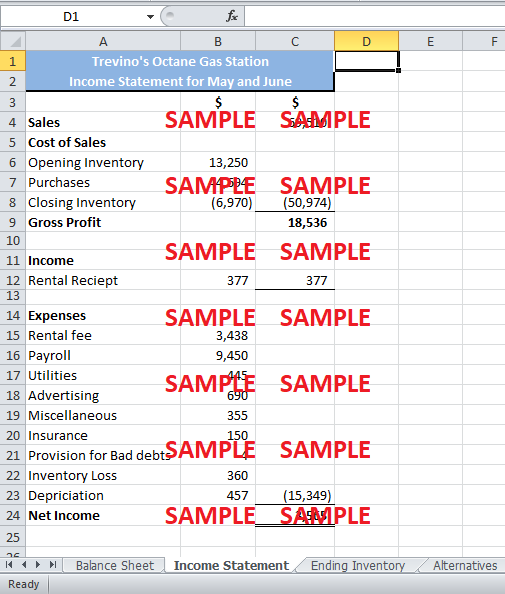 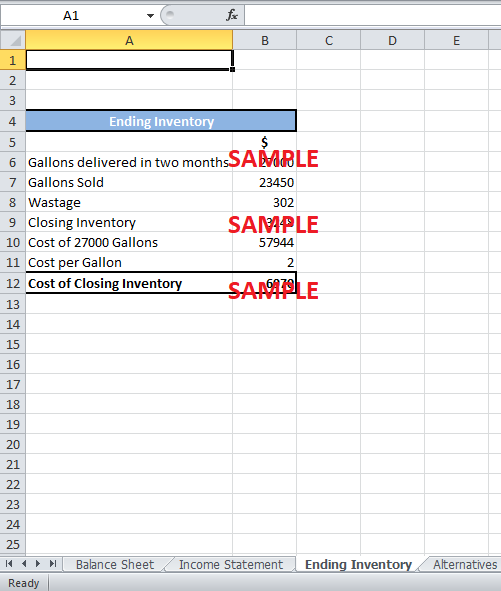 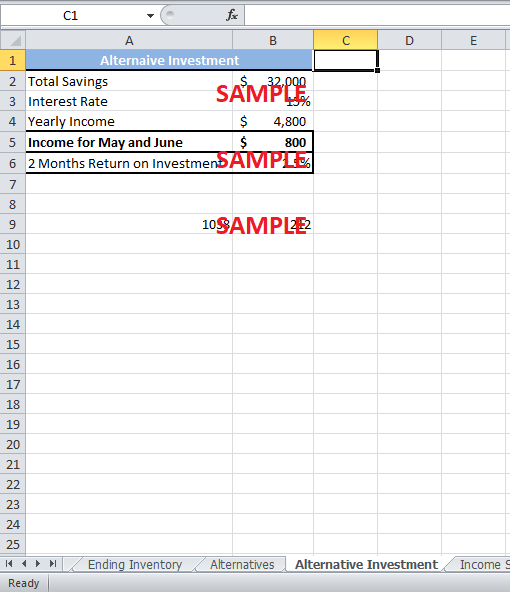 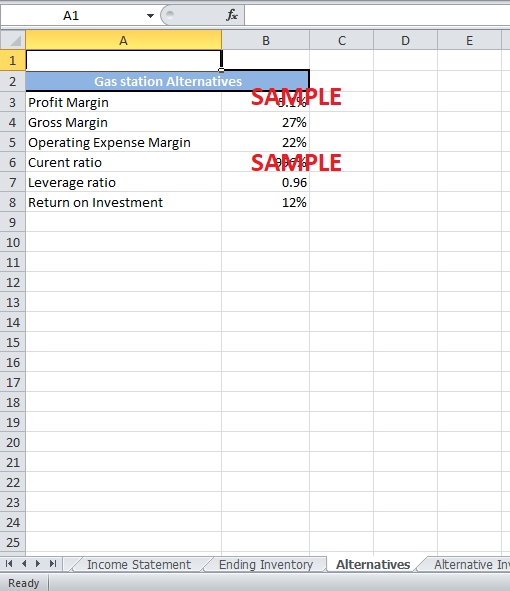 1. Prepare a May 1 and a June 30 balance sheet for Julio Trevino’s service station and an income statement for the intervening period.

In order to make the balance sheets and income statements, a lot of assumptions were made. On May 1, Trevino leased the station for a rental payment of $ 1250 per month plus 0.04 on every gallon sold.The lease is for one year. The lease would be treated in the Balance Sheet as a capital lease because for two reasons it is obvious that the rights of ownership of the property are transferred to Trevino after the lease was signed. Firstly, Trevino takes one year fire and casualty insurance policy on the lease. Secondly, Trevino charged the nearby business some rental fee on using the leased land to generate extra income. This shows that the risk and rewards from the leased property has been given to Trevino by Octane. The value of land and building under the lease would be the value of all the future rental payments. The rental payment is $ 1,250 per month, so in 12 months, the payment would be $ 15,000. The Additional commission on gallon sold is $ 0.04 multiplied by the total gallons sold during the year i.e. 150,000 gallons. This commission would be $ 6,000. Hence, the value of land and building under capital lease would be $ 21,000. Other fixed assets included furniture and equipments. Balance Sheet for May 1 and June 30 is shown in Exhibit 1. On May 1, Trevino had invested $ 29,700 into the business.

For the income statement in Exhibit 2, most of the information was used from the case. However, Ending Inventory had to be calculated. Using the rental payments made to Octane, the gallons sold could be calculated as shown in Exhibit 3. The information regarding the gallons of oil delivered, the wastage and the purchase payments the closing inventory on 30 June can be calculated. The ending inventory turns out to be $ 6,970. The expenses are recorded as incurred. Thus, the net Income for the two months is $ 3,565.

Additional expenses like depreciation, Inventory loss and provision for bad debt are also accounted for in the income statement. The depreciation charged is for the equipments and furniture at 5 years and 10 years straight line basis with no salvage value. The provision for bad debt is charged on the accrued income at 2 %. Inventory loss for 302 gallons is charged at $ 360. These three expenses are non cash expenses.

The balance sheet for June 30 contained additional amounts of the net income for May and June and drawings and accrued expenses as on June 30th. The cash in hand remains constant at $ 200. The value of land and building decreased to $ 17,420 as 27000 gallons is delivered and two month lease has been paid. An important thing to note is that the Bank balance as at 30 June is deduced using the net asset figure obtained in the balance sheet. The figure could not be calculated directly due to insufficient information.

Another assumption made is that the gas and oil used by Trevino, and his family at retail prices is deducted from the drawings and the amount he paid back is added back to the drawings. Except for this usage is not accounted for anywhere in the Balance Sheet or Income Statement.

2. Has Julio Trevino’s investment in the gasoline station been a good one for him? Has his return on his investment been greater or less than he would have received had he invested his funds at 15% elsewhere?

There are a few points to consider when analyzing Trevino’s investment in gasoline station. Firstly, the location of the gas station is very advantageous for Trevino. The station is expected to generate a good advertising program and consumer appeal. This will lead to high sales for Trevino’s gas station. Hence, as the station has good profit potential it might turn out to be a profitable investment for Trevino. Secondly, Octane service station would be an established firm with a recognizable product. The quality of the product will also be good. On-time delivery would also be a feature of such a firm. Thus, associating with such a firm would facilitate Trevino for sure. The first two months of operation have generated a profit of $ 3,565. This profit can grow over time.