OSG is a multinational corporation specializing in manufacturing and selling of cutting tools and parts used by industries worldwide. The company established in 1938, is based in Japan but has strong overseas sales in a number of countries across the Americas, Europe and Asia. Due to huge overseas sales, OSG faces increasing foreign exchange transaction exposure on its outstanding imports and exports denominated in foreign currency. Thus, the company vows to explore the various financial techniques available to it in order to mitigate the foreign exchange transaction risk. The company has to choose between whether to go with no hedging, selective hedging or mandatory hedging and within hedging, whether and how to use the hedging techniques of forward contracts, money market hedging and options. 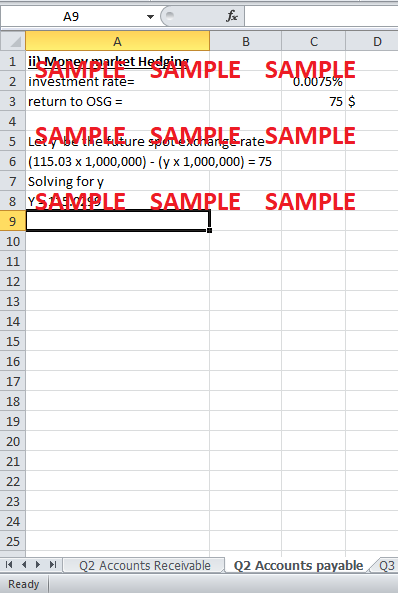 1. Explain non-hedging techniques for OSG to minimize transaction exposure, if any.

There are two non-hedging techniques available to OSG to minimize transaction exposure.

Under this policy, OSG can invoice its buyer in yen instead of the buyer’s home currency. Thus, no matter what happens to the foreign exchange rate, OSG will get its payment in yens and transaction exposure will be nullified; the transaction risk has been virtually shifted from OSG to the buyer. However, this approach has some challenges. Unless you are a US exporter, with your home currency, the US dollar, being the key international trade currency, demanding foreign buyers to pay in your home currency renders you less competitive in the market.

The second method to minimize foreign exchange transaction risk for OSG is by netting the risks out through frequent and diverse transactions. OSG is a large multinational corporation, and there are two reasons as to why its transaction exposure can be effectively mitigated by netting out:

Hence, although OSG’s overall risk cannot be completely nullified but can be mitigated to extent by netting off.

2. What are the costs of alternatives for reducing short term foreign currency risk? Assume OSG has an account receivable of US$1 million. Use the information provided in Appendix 1 for this account payable case of US$1 million to a US company. Which of the possible hedging methods presented in the case should OSG use if they expect the dollar to depreciate versus the yen during the next three months? Use the information provided in Exhibit 10.

OSG can enter into a forward contract of selling US $ 1 million in 90 days at the three-month forward rate of Y116.18/$. At the end of 90 days, OSG will be able to convert the received US $ 1 million into yen at this fixed stated rate.

Since the dollar is expected to appreciate against the yen, there is going to be a forward premium, and OSG will gain relative to the current spot rate instead of incurring any cost with the forward contract.

OSG could also use money market hedging techniques. Under this method, OSG will take a loan of US $ 1 million and convert it into Yen. At the time of completion of 90 days, OSG will return the principle amount of US $ 1 million, plus the accrued interest using the US $ 1million receivable realized.

OSG can also hedge the risk by buying a 3-month put option. This option will give OSG a right to sell US $ 1 million at the exercise price on or before the 3 months completion date.

OSG will incur the cost of exercising the option equal to the stated premium of the option.

The three methods can be evaluated one by one:

The spot exchange rate is Y115.03/$, and the dollar is expected to depreciate during the next three months. This means that the future spot rate is expected to be below Y115.03/$ at least. However, the three month forward rate is Y116.18/$, which means the holder of this contract will buy US dollars for more yens then they would have if they had bought them at the spot exchange rate on that day. Hence, buying the future contract is not useful.

OSG can convert yens to US $ 1 million at the current spot exchange rate and invest them in the bank today. The amount can be withdrawn after three months and used to clear the accounts payable payment. OSG will also earn 0.0075% interest on its investment.

However, since the dollar is expected to depreciate, OSG might be better off by not taking the above approach and simply converting yens to US $ 1 million on the spot exchange rate on the three months end-date and make the payment.

Whether to convert on today’s spot rate and invest, or convert on the future spot rate, really depends on the comparison between the investment interest rate and the extent of depreciation of the dollar.

Hence, even if the dollar falls only from Y115.03/$ to Y115.0299/$, OSG is better off by converting on the future spot exchange rate. The money market hedging option doesn’t seem very good given dollar is expected to depreciate.

OSG can buy a 3 month call option for US $ 1 million, strike price Y115.73/$; 1.29% premium to cover itself if the dollar was expected to appreciate, but since the dollar is expected to fall, OSG will never exercise this option. Hence, using options to hedge in this case is out of the question.

3. Suppose that OSG undertakes the same mandatory hedging policy as S. Corporation, the American company whose minimum forward-cover schedule is shown in Exhibit 9. Apply this schedule to the US$1 million account receivable case for OSG and find the expected total end-of-period value of the position taken by OSG. OSG expected to receive a US dollar (foreign currency) payment of US$1 million in three months. The spot rate was Y115.03/$, and the forward rate Y116.18/$ as shown in Appendix 1. Use Exhibit 10 for minimum forward-cover. Note that the yen is the home currency for OSG.