Mary Linn, Vice President of Ocean Carriers (a shipping company), is evaluating a proposed lease of a ship for a three year period. The requirements specified by the customer demand the construction of a new vessel, which will take two years to construct. The customer offers an attractive price for the hire, but the contract is only limited to three years. The hire rate after the end of the contract period is hard to determine, as the rate is largely dependent on prevailing supply and demands of shipping vessels. The demand of the capesize is expected to be strong due to strong demand for main cargo – iron ore and coal – in Australia and India. However, the construction of the new vessel requires a significant investment of $39 million, and the resulting cash flows might not guarantee an attractive return. The company also has a policy of selling ships that are older than fifteen years. The policy leads the company to forego the cash flows that could be generated from the new vessel beyond fifteen years of operation. 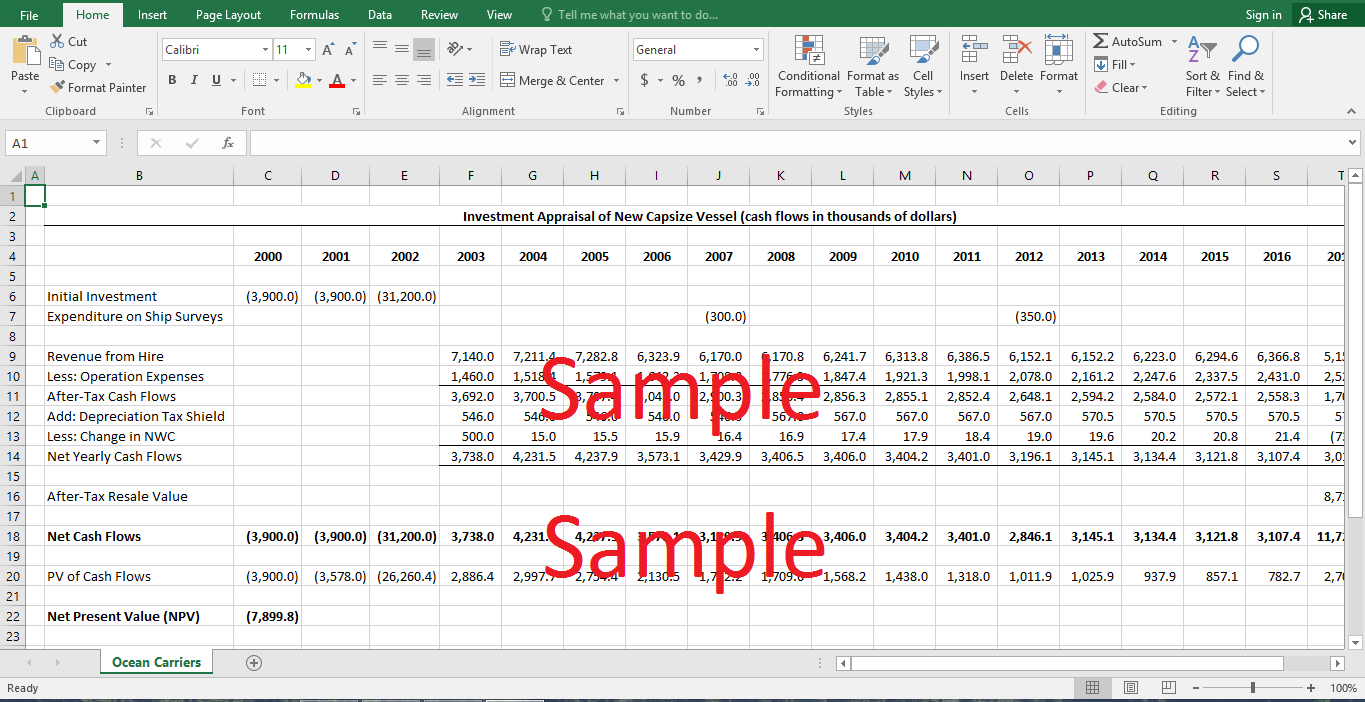 1. Do you expect daily spot hire rates to increase or decrease next year?

The hire rates are determined by the supply and demand of the shipping vessels. The supply and demand composition can change over time. The supply for the next year can be forecasted by adding the number of vessels that are currently operation to the number of vessels estimated to be produced during the year, and subtracting the number of vessels that are expected to be scrapped. The supply is also reduced by ships that are sunk during the year. Moreover, an increase in the size and efficiency of newly manufactured ships also decreases the number of newer ships needed. The demand for shipping vessels is determined by the demand for the product that is transported - dry bulk capesizes. Therefore, the demand is determined by the state of the world economy, especially the state of the critical industries such as iron ore and coal. Production of these products increased in a strong economy and hence demand is stronger. The demand is also dependent on changes in trade pattern. Trade agreements between countries that are far away from each other (for example Western Europe and Australia) increase the demand for shipping vessels.

3. How would you characterize the long-term prospects of the capesize dry bulk industry?

The long-term prospects of the industry are dependent on the demand for the vessels. More than 85% of the cargo carried by capesizes is iron ore and coal. The production of iron ore in Australia is expected to be strong, and the Indian iron ore exports are expected to take off in the upcoming years. Considering a favorable forecast of production in Australia and India, one should expect a similar favorable forecast of demand on vessels service over the long run. Therefore, the capesize bulk industry is expected to grow in the long-term.

4. Should Ms Linn purchase the $39M capesize? Make 2 different assumptions. First, assume that Ocean Carriers is a U.S. firm subject to 35% taxation. Second, assume that Ocean Carriers is located in Hong Kong, where owners of Hong Kong ships are not required to pay any tax on profits made overseas and are also exempted from paying any tax on profit made on cargo uplifted from Hong Kong.

In order to evaluate the cash flows provided by the new vessel, we need to estimate the revenues generated and the expenses incurred. The expenses are easy to estimate because it is mentioned that the expenses are $4000 per day for all days of the year, and increase at a rate that is 1% higher than the prevailing inflation rate (3%). On the other hand, there is a lot of uncertainty associated with revenues because of the variability involved in daily hire rate. The revenues for the first three years are easier to estimate if it is believed that the customer will abide by its three-year contract. After the first three years, the revenue estimates provided by the consultant are used. When calculating the yearly revenues, the planned number of days that are scheduled for maintenance is deducted. The expenses and taxes (if applicable) are deducted from the cash flows to arrive at the after-ax cash flows. Under the scenario where there are no taxes, the after-tax cash flows are equal to pre-tax cash flows. In the absence of taxes, the effects of depreciation are ignored. If taxes are present, the tax shield provided by depreciation is added back to the cash flows. The changes in net working capital are also accounted for before determining the net cash flows resulting from the new vessel.

The cash outflows of the company are comprised of the initial investment of $39 million that is spread over the initial three years, and expenditure that is expected to be incurred before each five-year inspection of the vessel. Both these expenditures also result in annual depreciation expense. An additional cash inflow results at the end of the fifteenth year of operations when the company sells the vessel for a scrap value of $5 million. Since the book value of the vessel at that time is greater than its scrap value, the company will also realize some tax credit on the sale. It is also assumed that the total investment in net working capital during the life of the vessel will be reversed when the vessel stops operating.