The following case analysis is based on the merger between Southeast Airlines and Northern Airlines. The case attempts to answer a few of the answers that the newly appointed President of North - South Airline has regarding maintenance costs and the average age of the aircraft. The airline industry has been established on this belief that the age of the aircraft is correlated to the maintenance costs incurred. The maintenance costs incurred in this case refer to the mainframe costs per aircraft and the engine costs. The President has assigned Peg Jones, the VP of operations and maintenance to consider the relationship between these various independent variables and come up with a sorted analysis for this relationship between maintenance costs and average fleet age. The analysis that follows has been conducted using the data sets provided by both the Northern Airlines and Southeast Airlines from 2001 till 2007. Moreover, the cost categories defined are two: Airframe Costs per aircraft and Engine Costs per aircraft. 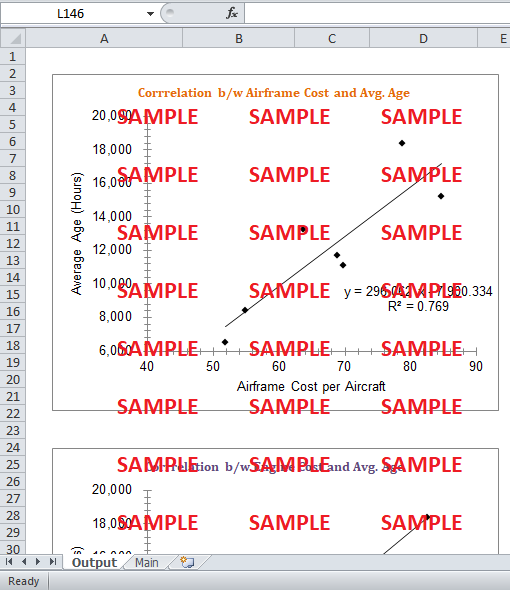 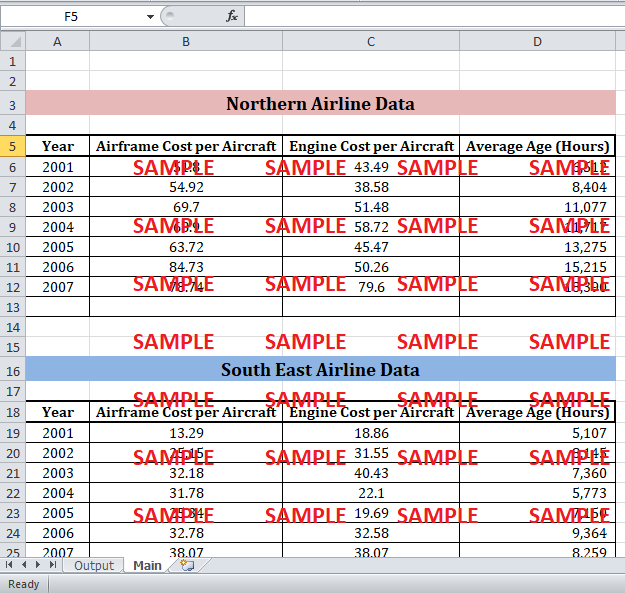 Separate data sets for both fleets were given in the case extract. The function Correlation had been selected from Mega Stat to perform the correlation analysis. A scatter plot has been made in Exhibit-1 that shows the relationship between the independent variable (Airframe Cost) and the dependent variable (Avg. Flee Age). The graph shows a linear relationship existing between the two variables. The linear relationship may be explained by the straight line passing through the points in the scatter plot. The positive gradient of the line as shown by the regression equation also indicates a positive (direct) relationship between the airframe costs and average age (Krishnan, 2009).

Moreover, the relationship has further been analyzed using the R-squared value. The regression analysis table in Exhibit-3 is for Northern Airlines and it shows that R-squared value equals 76.9 percent. This value may be interpreted as saying that 76 percent of the change in average fleet age is explained by the airframe maintenance cost. Higher the cost incurred, higher would the average age of the aircraft and vice versa.

This correlation may further be explained using the other maintenance cost head i.e. Engine Cost. The scatter plot in Exhibit-2 is evidence to the fact that a linear relationship exists between the engine cost and the average fleet age. Moreover, the regression analysis table in Exhibit-4 is further indicative of this fact. The R-squared value of 61.2 means that 61.2 percent of the changes in the average fleet age may be attributed to the costs incurred for engine maintenance. Logic dictates that well-maintained engines tend to keep airplanes functioning for a longer time period and vice versa (Sharma, 2005).

As for the fleet of Southeastern Airline, the data set has been analyzed in a similar way and results show a linear relationship between both cost variables (airframe and engine). Exhibit-5 shows a linear relationship indicated through a straight line between airframe cost and average fleet age. The line equation seems to have a positive coefficient for x which means the gradient is positive and thus a direct relationship is evident. Similar has been the relationship between Engine Cost and Average Fleet Age. The straight line is evidence for it and so is the positive gradient or this line equation (Exhibit-6).

Regression analysis, however, does not explain the relationship like it did for the Northern Airline's fleet. The regression analysis is Exhibit-8 shows that the R-squared value comes out to be 46 for airframe cost and average fleet age. This means that not too much of the impact on average fleet age comes from airframe maintenance cost and there must be other variables causing a longer or shorter age of aircrafts (Daroczi, 2015).

As identified in the paragraphs above, the percentage of change explained by the maintenance cost variables had been higher for Northern Airlines but was much lower for Southeast Airlines and hence the analysis remained only partially complete. To determine whether an actual and strong relationship exists between the two variables, it is essential at this point to incorporate other possible factors that lead to a considerable impact on the average age of aircrafts. These factors could be various.