California Plant Protection (CPP) is a very successful security guard firm. Tom Wathen is the CEO and sole owner of CPP. Pinkerton, in 1987, was a competitor of the firm with a good brand image. Wathen wanted to buy Pinkerton when it was available for sale. Morgan Stanley represented American Brands in the sale and the bidding. They would not accept a bid of lower than $100 million. He has to decide whether the acquisition of Pinkerton was profitable enough to buy it at that price. He has two financing options. He can raise money by either a $75 million at 11.5% interest or a $100 million debt at 13.5% interest. Wathen has to decide whether to acquire Pinkerton and if so, how to finance the bid. The free cash flow technique coupled with the continuing value and incremental improvements are used to analyze the decision. 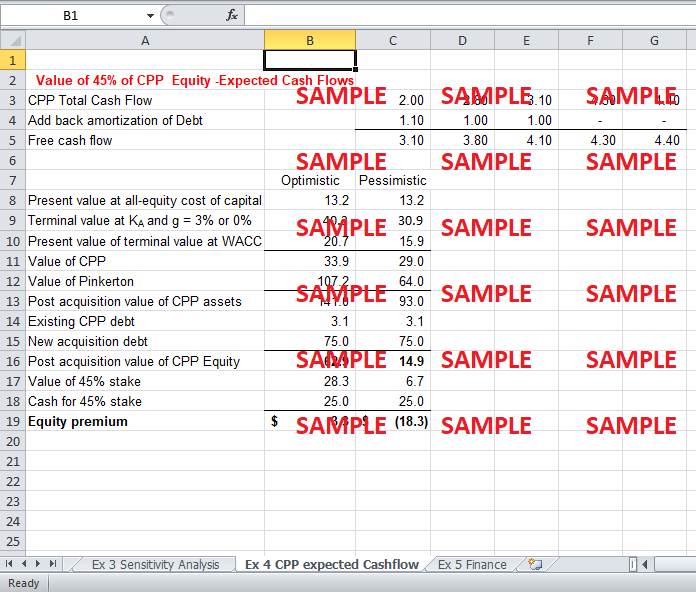 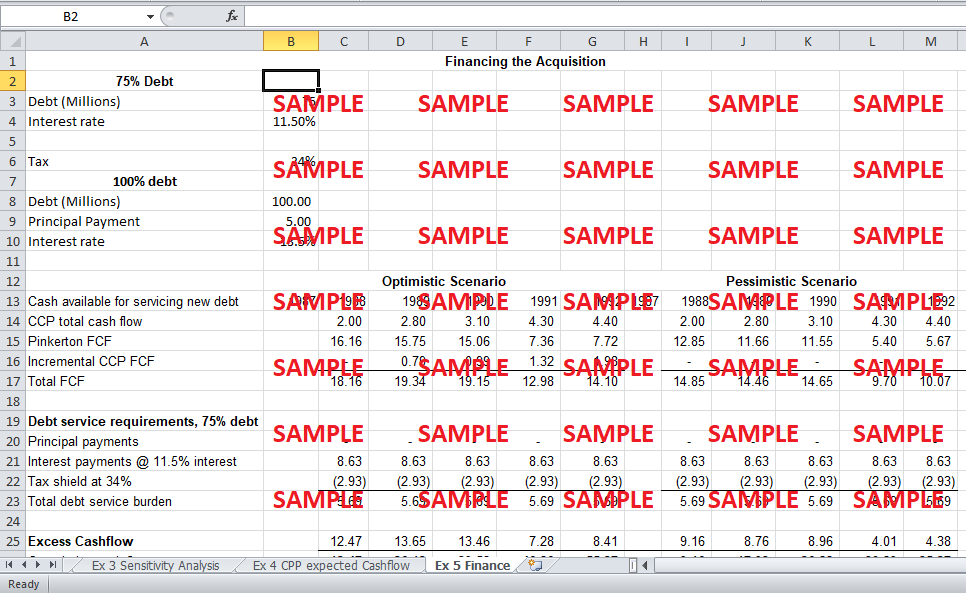 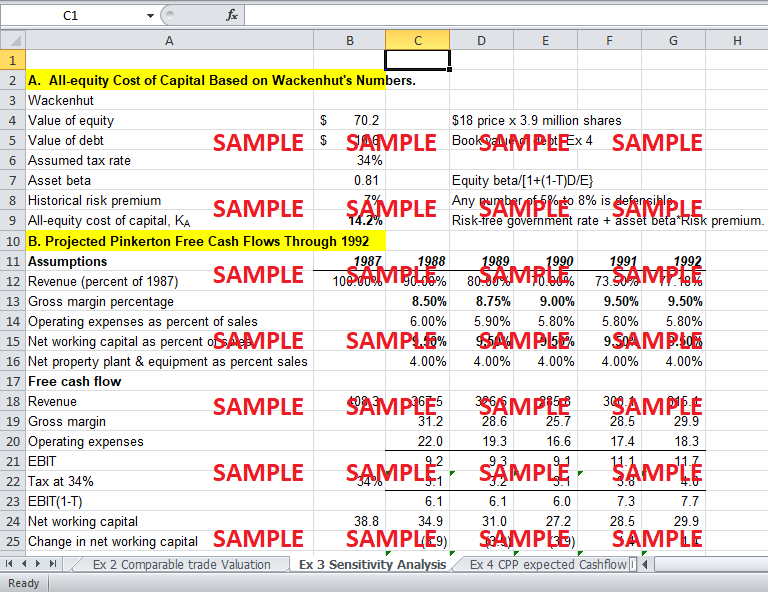 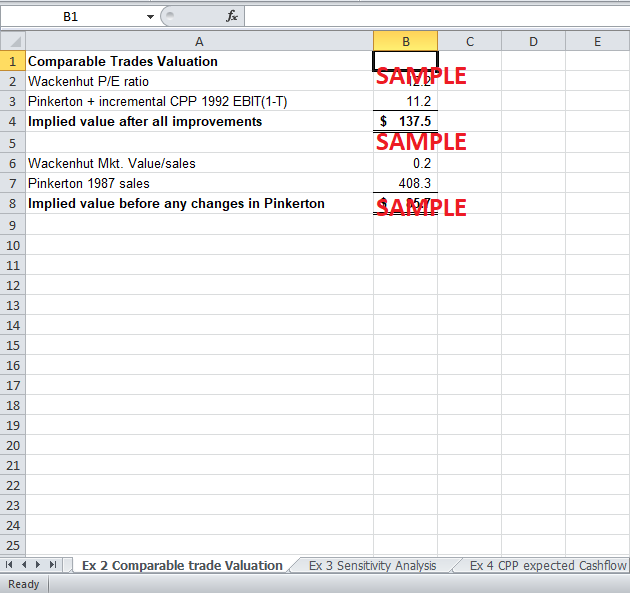 1. Why is Wathen acquiring Pinkerton’s Inc.? How specifically will he create value? What should his bid strategy be?

There are many ways in which Pinkerton can add value to CPP. For one, the synergies created by the consolidation of the operations of both firms will contribute in increasing profitability. This could be due to the elimination of common overhead. These overheads reduced the cost through closing down of redundant offices, losing excess support staff and other common facilities by CPP. Another major advantage of this acquisition would be the addition of significant resources for the firm in a form of Pinkerton’s assets and employees. Furthermore, the CPP task force believed that they could improve the working capital of Pinkerton significantly through improvements at the management level. Finally, Pinkerton’s Brand name is well known among CPP’s customers base. CPP can utilize Pinkerton’s name to increase revenue. This is extremely necessary in the highly price competitive security guard industry.  Therefore, CPP could be marketed as a premium using the name. Hence, the increase in customer due to product recognition will offset and exceed the reduction in revenue caused by the rise in price.

For numerical calculations, it has been assumed that Pinkerton added value to CPP through three sources. First, the free cash flows for next five year and thereafter will increase due to increase in revenue. The synergies of operation and other improvements will also result in additional value to CPP. Lastly; CPP will be able to take advantage of the tax shield. Exhibit 1 shows these calculations and shows how the value of Pinkerton comes out to be $107.2 Million.

The value of the firm is high. However, he should try and increase his bid gradually rather than jumping from $85 million to $100 Million directly. In Exhibit 2, there has been calculated the value of implied value of all improvement using the Price to Earnings ratio and the Pinkerton and CPP incremental cash flow. This value turns out to be $137.5 Million. Similarly, there  also has been calculated the implied value before any improvements in Pinkerton which turns out to be $85.7 Million. This value has been calculated using market value to sales ratio and Pinkerton sales in1987. This value could be used to negotiate the value with Morgan Stanley. Furthermore, in exhibit 3, there has been showed the risk wathen is taking by acquiring this new firm. The exhibit show how the firm will perform in a pessimistic scenario. The net present value of the Pinkerton’s free cash flow in a pessimistic scenario would be $64 Million. This value can also be used to lower Morgan Stanley’s bid. These two figures indicate that CPP has to do a lot improvement in Pinkerton and invest a lot of money in it to become profitable; therefore, CPP is taking a lot of risk acquiring Pinkerton. This strategy might help in putting a downward pressure on prices.

2. What is the proper cost of capital for evaluating this acquisition? Consider this from the standpoint of WACC and APV.

To answer this question, there is need to understand the differences between WACC and APV. APV basically unbundles all the value generating variables; therefore, it tells the management that which variable gives how much value. Furthermore, APV works even in cases where WACC fails. Also, APV tackles complex situations far better than WACC. Most importantly, WACC assumes that the debt level remains constant throughout the projects life. APV does not have this limitation and can accommodate the changing debt levels. Therefore, APV is a much better tool compared to WACC in this situation.

3. Develop and find the present values of the free cash flows from Pinkerton’s Inc., and also from the CPP margin improvements. Calculate this only on the assumption of a 25-75 equity-debt split.

4. How will we make our decision on financing choice / capital structure? Consider the issue of meeting debt service requirements.

5. What is the value of the equity Wathen must give up if he chooses the 25 percent equity alternative?

The bank is ready to give a loan of $75 Million with a $25 million equity investment for financing of the bid in exchange of a 45% stake in the combined company. Exhibit 4 shows the value of the 45% stake in the business to be $28.3 Million. This would mean that Wathen would be giving away an equity premium of $3.3 Million.